Salon C (Hilton Chicago)
J. C. Guia-Tello (Cinvestav-Saltillo), M. A. Pech-Canul (CINVESTAV-MERIDA), M. I. Pech-Canul (Cinvestav-Saltillo), J. A. Gorocica-Diaz, R. Arana-Guillťn, and J. Puch-Bleis (Airtemp)
The aim of this research is the evaluation of corrosion behavior in Sea Water Acidified Accelerated Test (SWAAT) solution of tube/fin assemblies from two aluminum condenser prototypes with micro-channel tubes having similar compositions but different amount of sprayed zinc per unit area (5.5 and 4.2 g/m2, respectively).  Such assemblies (Fig. 1) were brazed in a laboratory furnace under a pure nitrogen atmosphere. In order to simulate conditions for different diffusion rate and penetration depth, two sets of brazing parameters were selected: set A (610°C, 4min) and set B (600°C, 2min). The results of potentiodynamic polarization and electrochemical impedance measurements showed for both prototypes that the sample brazed under set B parameters exhibited lower corrosion rate compared to that brazed under set A parameters. The sample with lowest corrosion rate was the one with microchannel tubes containing 5.5 g/m2 of zinc before brazing. The observed corrosion behavior was correlated to zinc diffusion profiles obtained from SEM-EDS analysis. Galvanic current measurements showed that for short immersion times (1h) the tube is anodic to the fins, but the current is not stable and there is an evolution to lower values, suggesting that for long immersion periods there might be a inversion in the galvanic coupling. 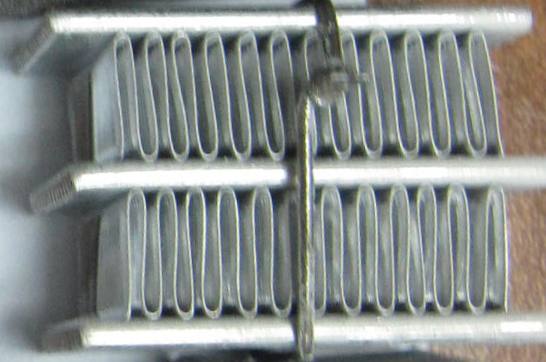