Boulevard Room A (Hilton Chicago)
C. G. Arges and P. F. Nealey (University of Chicago, Argonne National Laboratory)
Polymer electrolyte membranes and electrode binders play a critical role in a variety of electrochemical cells (batteries, fuel cells, electrolyzers, supercapacitors, etc.) because they are ion conducting while being electron insulating. Block copolymer electrolytes (BCEs), where one block contains ionic moieties and the other block being non-ionic, phase-separate between their ionic and non-ionic domains aiding in superior ionic conductivity at low ion concentrations.(1-3)However, the phase separation within these membranes tends to be isotropic making anisotropic ion transport elusive. A few researchers have attempted to orient the ionic domains in one direction by using external force methods (e.g., electric fields, magnetic fields, etc.)(4-6), but selective anisotropic ion conductivity has not been achieved(4).

In this talk, the technique of directed self-assembly of BCEs will be illustrated for engineering ionic domains perpendicular to electrode surfaces. The semi-conductor industry has adopted this technique for creating periodic, nano-patterned substrates.(7) In this approach, the surface interfacial energy was controlled using polymer brushes and solvent vapor annealing afforded phase separation between the blocks. Both perpendicular cylindrical and lamelle morphologies were prepared. Subtle reaction chemistries introduced the ionic groups selectively into one of the blocks without disrupting the block copolymer morphology. The specifics of the processing scheme will be elaborated on at the talk.

FTIR and x-ray photoelectron spectroscopy (XPS) confirmed the presence of ionic groups in the BCEs. Furthermore, XPS also demonstrated that the films participate in ion-exchange processes of the counterion. SEM and AFM determined the morphologies of the BCE structures. Figures 1a and 1b provide AFM images of a perpendicular fingerprint lamellae of poly(styrene-b-2-vinyl pyridine) (PSbP2VP) and poly(styrene-b-2-vinyl pyridinium iodide) (PSbP2VP+ I-). The images represent the block copolymer structures before and after introduction of ionic groups. In this work, ion conductivity measurements were made using electrochemical impedance spectroscopy (EIS) in thin films.

The talk will conclude with future research directions for the uni-directional orientation of BCEs that: i.) investigate the influence of BCE morphology, feature size, and defects on ionic conductivity and ii.) incorporating directed self-assembled BCEs into miniaturized, in-plane electrochemical devices (e.g., micro-batteries and micro-supercapacitors). 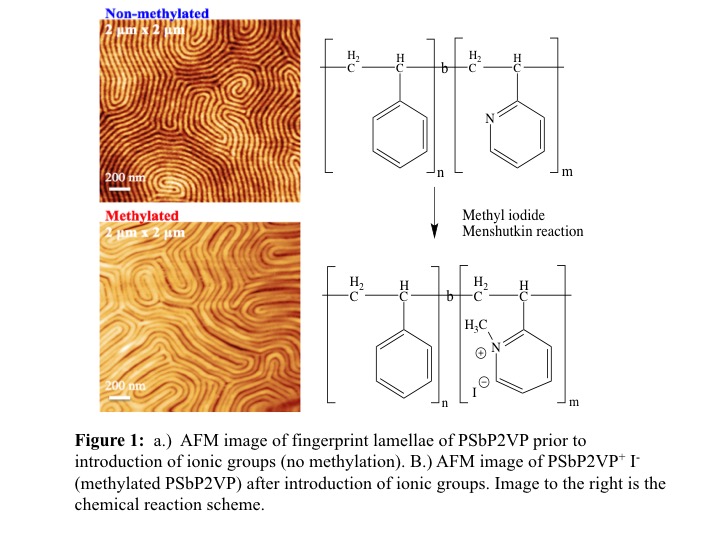