2166
Transparent Nanowire Electrodes As a Tool for Electrochemical Detection

In our study, we fabricate and characterize transparent electrode based in metal nanowires for electrochemical detection. By changing the length, diameter and amount of deposited nanowires, we can vary their transparency (up to 90% transparent), sheet resistance (up to 0.1 ohm/square) and effective surface area. Compared to conventional evaporated plain electrodes, printed nanowire electrodes can achieve more than 80% transparency (in visible range) with the same electrochemical effective surface area. Using these electrodes, we can fabricate new sensors with high transparency (> 90%), flexibility and high sensitivity to oxygen and hydrogen peroxide. The detection of these two components is predominant in healthcare and environmental monitoring.

The combination of those properties could allow us to use this type of sensors as opto-electrochemical sensors for monitoring living cells and also for glucose detection on humans. Transparent nanowire electrodes can also be a real alternative to existing indium tin oxide (ITO) transparent electrodes for other applications.

Figure 2. SEM image of silver nanowire electrode and the size distribution of nanowires.

Figure 3.  Voltammetry response of the nanowire based electrochemical sensor to hydrogen peroxide in phosphate buffer (pH=7) 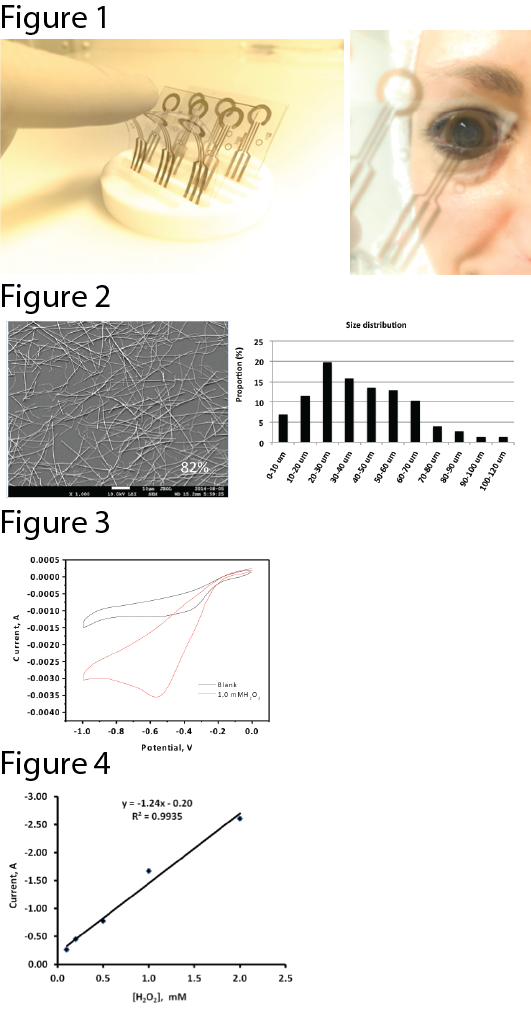