Boulevard Room B (Hilton Chicago)
L. Zhang, L. Zhu, and A. V. Virkar (The University of Utah)
Predominantly ionic conductors and mixed ion and electron conductors (MIEC) have numerous applications in gas permeable membranes, solid oxide fuel cell (SOFC), solid oxide electrolysis cell (SOEC) to name a few. Both ionic and electronic conductivities of MIEC are of interest. A traditional way to measure partial conductivity is the Hebb-Wagner polarization method [1]. In the original work by Hebb, electronic conductivity of Ag2S was measured as a function of position by measuring position-dependent electric potential. Application of the Hebb-Wagner method to materials such as YSZ involves fitting to the polarization equation. Since in most studies position-dependent electric potential cannot be readily measured. Most measurements are made under applied voltage large enough so that parts of the sample exhibit n-type and p-type conduction as well as the intrinsic region in which the electronic conductivity is exceptionally low. This may lead to an underestimate of electronic conductivity under certain conditions.

The electrical circuit used in the transient technique is shown in Figure 1. During charging, oxygen ions migrate through YSZ electrolyte from electrode II to electrode I, and electrons migrate through external circuit from electrode I to electrode II. Effectively, neutral oxygen gas is pumped into YSZ (changing its stoichiometry slightly) and into cavity between YSZ and Pt probe. The kinetics of this process is dictated by oxygen ion conductivity, and the corresponding ionic resistance can be obtained. During discharge, both oxygen ions and electron migrates through the YSZ electrolyte, and neutral oxygen dissipates until its partial pressure inside the sample reaches the same value outside the sample. The kinetics of this process is limited by electronic conductivity, which can be obtained from the time dependence of the potential across the embedded electrode and the surface electrodes. Figure 2 shows the time dependence of the applied voltage, the measured current,the measured Nernst voltage, and the calculated electronic resistance of the YSZ sample at 650°C. Figure 3 shows an Arrhenius plot of the electronic resistance of YSZ. The corresponding activation energy is measured to be 1.9 eV. The results of the transient technique described here agree well with our previous steady state permeation technique.

Funded by in part DOE EFRC Grant Number DE-SC0001061 as a flow-through from the University of South Carolina and in part by DOE under Grant DE-FG02-06ER46086. 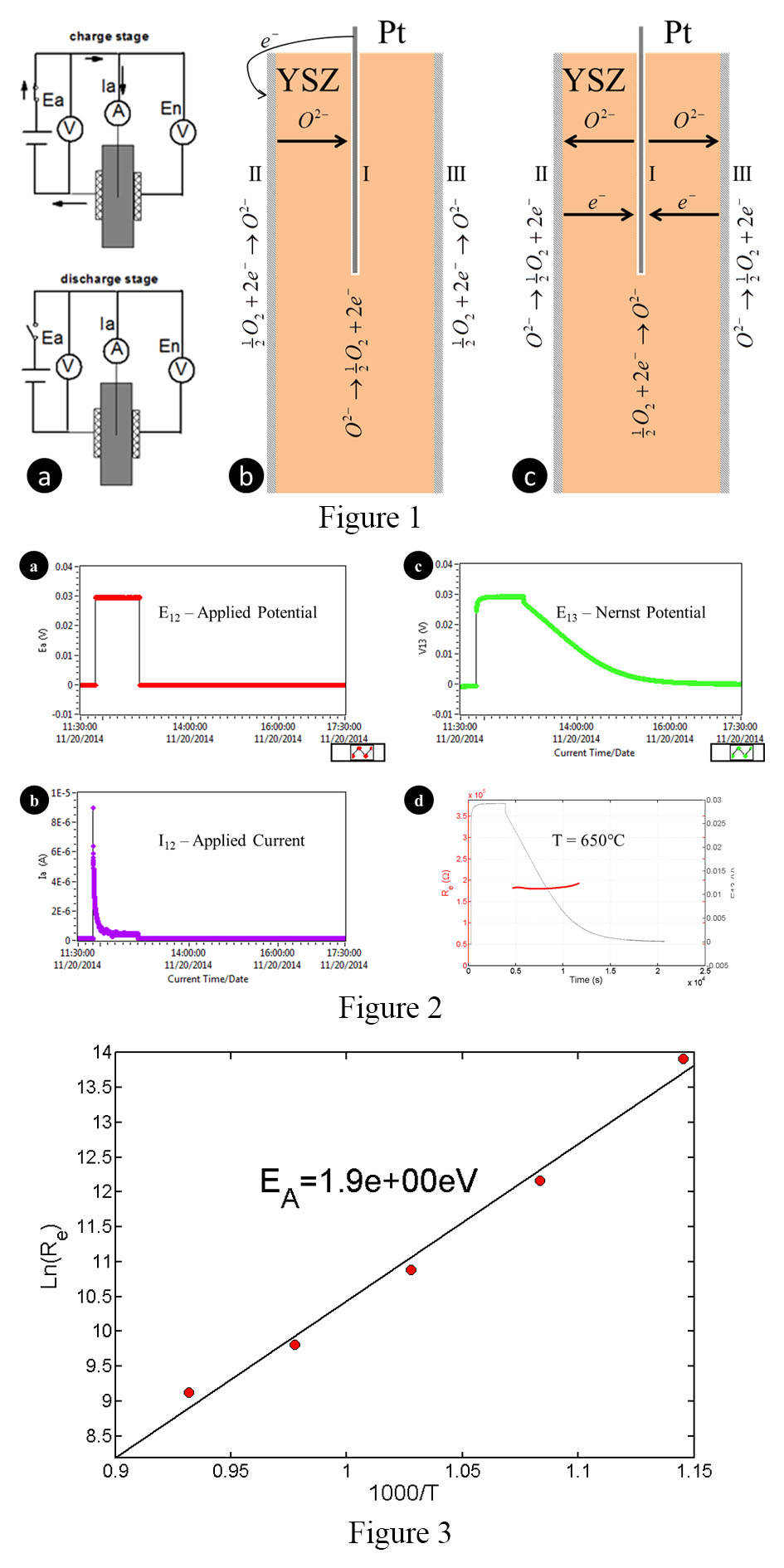