Williford Room A (Hilton Chicago)
I. Sriram and K. M. Jeerage (NIST)
Basic fuel cell technology has existed since the nineteenth century. However, fully optimized and cost efficient designs have yet to be realized, driving ongoing research in fuel cell development. Direct methanol fuel cells (DMFCs) are particularly important, due to the high energy density of alcohols. Consequently, several directions are currently being explored to improve these fuel cells. These include the development of novel catalyst materials, especially nanoparticle materials that reduce or eliminate noble metal content.

Traditionally, DMFCs have been operated with acidic electrolytes, such that proton exchange membranes (PEMs) carry H+ from the anode to the cathode. To avoid undesirable effects, such as alcohol crossover, it would be beneficial to operate DMFCs with alkaline electrolytes, as the transport of OH- from the cathode to the anode reduces both alcohol crossover and the potential for catalyst poisoning. Realizing these advantages requires suitable anion exchange membranes, which are still under active development 1. Therefore, to evaluate novel catalyst nanoparticles, Nafion (a common PEM material) is typically used to bind particles to the substrate electrode, even in alkaline environments. However, the effect of utilizing this potentially unsuitable material has yet to be quantified fully.

In this work, we explored the experimental ramifications of using PEM materials in an alkaline environment, where OH- transport to the electrode is required. Initially, we synthesized 70 nm polycrystalline platinum nanoparticles (PtNPs), and deposited them onto the surface of a 3 mm diameter glassy carbon electrode. Nafion solution (5 wt %, Sigma) was diluted tenfold in ethanol, and then added to the glassy carbon surface in 3 mL increments, corresponding to a calculated thickness of 0.9 mm 2. After each incremental deposition, we measured five cyclic voltammograms in electrolyte containing 1 mol/L sodium hydroxide (NaOH) and 1 mol/L methanol (MeOH).

Cyclic voltammograms demonstrated the previously reported behavior for this system 3. However, as the thickness of Nafion increased, the peak current decreased significantly, suggesting adverse effects for anion transport in this material. We also determined the peak current as Nafion thickness increased by an order of magnitude (Figure 1). Although the peak current decreased by nearly an order of magnitude, it stabilized at approximately 6 mm Nafion thickness and the cyclic voltammograms retained the characteristic appearance of methanol oxidation. These results suggest that the concentration of OH-reached a steady state at the electrode surface, despite further increases in ion exchange membrane thickness.

We performed a series of control experiments to determine if or our handling protocol (air drying and then rehydrating the Nafion layer) decreased electrocatalytic activity. We prepared an electrode with a similar quantity of catalyst nanoparticles and 0.9 mm Nafion. We then obtained a series of cyclic voltammograms, allowing the electrode surface to air dry for approximately two minutes after every five voltammograms. This treatment decreased catalytic activity to one-third the original value after 60 cycles (equivalent to the cycles represented in Figure 1). However, this decrease was far less than what was observed through increasing Nafion thickness, indicating that the variation we observed during our layer deposition experiments is more readily attributed to the Nafion thickness, rather than degradation of the catalyst surface. We are currently refining our experimental methods to explore these physical phenomena further, and through these studies, we will improve our understanding of anion transport in proton exchange membranes.

Contribution of NIST, not subject to copyright in the U.S.

2. In order to adequately describe materials and experimental procedure, it is occasionally necessary to identify commercial products by manufacturer names or labels. In no instance does such identification imply endorsement by NIST or that the particular product is the best available for the purpose. 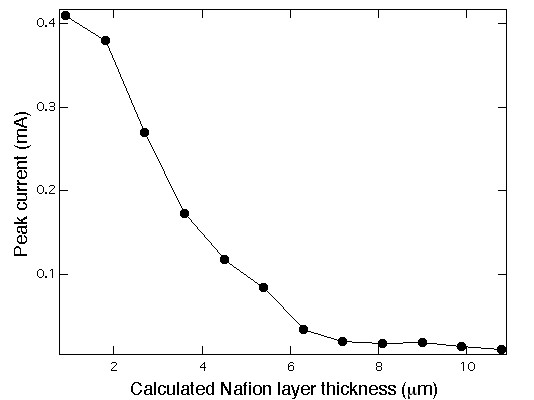