Williford Room A (Hilton Chicago)
S. Ghosh (Case Western Reserve University), N. S. Georgescu (Case Western Reserve University, Department of Chemistry), D. Scherson, and M. Sankaran (Case Western Reserve University)
Small metal clusters are finding exciting new applications in a variety of fundamental and technological areas including the petroleum industry.1,2  As has been amply emphasized in the literature, a reduction in size brings about increases in the surface to volume ratio, a factor of key economic importance to catalysis, including electrocatalysis, where active materials are often rare and expensive. In addition, the small dimensions elicit modifications in the electronic structure and often in the surface morphology of the clusters and thus in their chemical and electrochemical properties, including catalytic and electrocatalytic activities and redox potentials.3  Whereas classical thermodynamics predicts monotonic changes in the redox potential of metals as a function of their size, the properties of very small metal clusters of the type to be investigated in this proposed project will be governed by quantum mechanical effects.

This contribution described a new continuous plasma-liquid reactor system based on a direct current (dc) atmospheric-pressure microplasma formed at the surface of an open air, laminar flow liquid water jet has been designed and constructed.  The water jet is formed by pressurizing a capillary tube ending in a rectangular nozzle in a horizontal geometry yielding for suitable pressures a highly stable solution jet over distances on the order of several cm (see Fig. 1).  This allows the dc microplasma to be stably formed at the surface of an aqueous solution by placing a counter electrode downstream to pass current through the plasma-liquid interface (see Fig. 2). As has been shown by Sankaran and coworkers using a similar system,8 this tactic allows for electrons to enter the solution, leading, upon thermalization, to the reduction of metal ions leading, upon agglomeration, to the formation of metal clusters. A unique aspect of this strategy involves placement of the plasma source downstream a jet of the liquid containing the metal ions emerging from the nozzle of a capillary. This arrangement allows metal clusters of increasing size to be formed along the length of the jet, via diffusion and agglomeration (see Fig. 3).

This time-space correlation will make it possible to study the properties of arrays of clusters by suitable spectroscopic probes, including optical absorption and fluorescence, placed at various positions along the jet, while the liquid jet-plasma system is operating under a constant set of conditions. It is also envisioned that introduction of a reactant into the solution prior to its ejection through the nozzle will allow the catalytic properties of clusters of various sizes to be probed by monitoring the presence of the product along the jet length by spectroscopic and/or spectrometric means.9 In addition, strategies will be devised to explore the redox properties of these unsupported clusters by injecting the jet containing the clusters into solutions containing judiciously selected redox couples while monitoring spectroscopically the composition of the media.

(3) Plieth, W. J.: Electrochemical properties of small clusters of metal atoms and their role in the surface enhanced Raman scattering. The Journal of Physical Chemistry 1982, 86, 3166-3170. 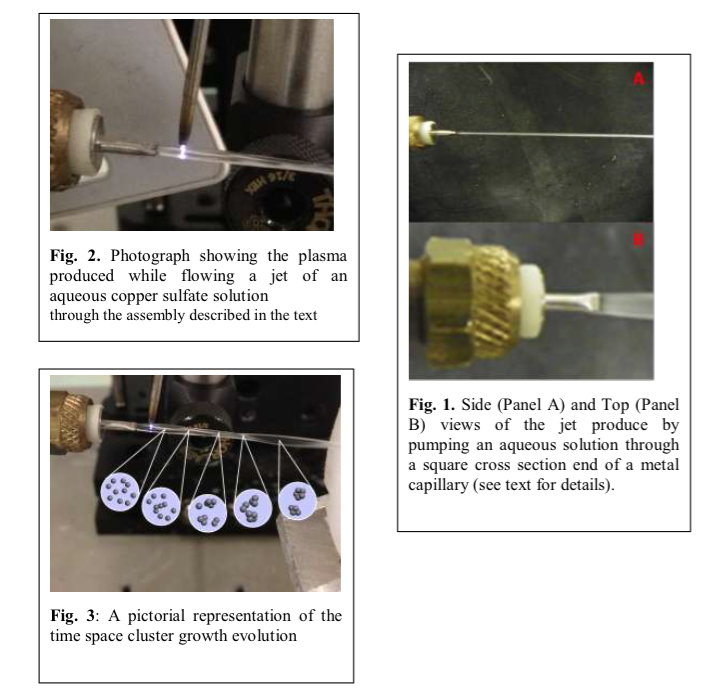