Conference Room 4G (Hilton Chicago)
V. Chakrapani (Renssalaer Polytechnic Institute)
Intrinsic diamond with its band gap of 5.5 eV is an extremely good insulator.  However, for undoped, hydrogen-terminated diamond exposed to air, a p-type conductive surface layer appears that is mediated by adsorbates from the ambient atmosphere.1  Since its discovery, several explanations of this effect have been proposed, none has received wide acceptance and the mechanism remained controversial.

Recent studies have shown indisputably that the conductivity arises as result of electron exchange between atmospheric oxygen and diamond through an electrochemical redox reaction occurring in an adsorbed water layer:

This results in the formation of a hole accumulation layer on the surface.2,3  This novel phenomenon, referred to as “surface transfer doping” depends only on the band line up of the semiconductor with respect to the ambient.  For diamond, the Fermi level is higher than the electron chemical potential of oxygen redox couple, which results in electron transfer into water layer and generation of p-type surface conductivity.  See Figure 1.  The electron chemical potential (Fermi energy) of the redox couple, which can be estimated from the Nernst equation.

Since water layers form spontaneously on surfaces exposed to humid air, electrochemical transfer doping is a very general phenomenon that has been unrecognized so far.  Since its discovery in diamond, the effect has been observed in other technologically important materials such as in single-walled semiconducting carbon nanotubes, graphene, gallium nitride and zinc oxide.4  The process not only affects the electrical properties but also optical properties of the semiconductor.  For example, in both GaN and ZnO, electron exchange between oxygen redox couple and mid-gap states results in dramatic changes in the ubiquitous yellow and green luminescence respectively. This phenomenon opens the door to novel and robust class of devices and processes. 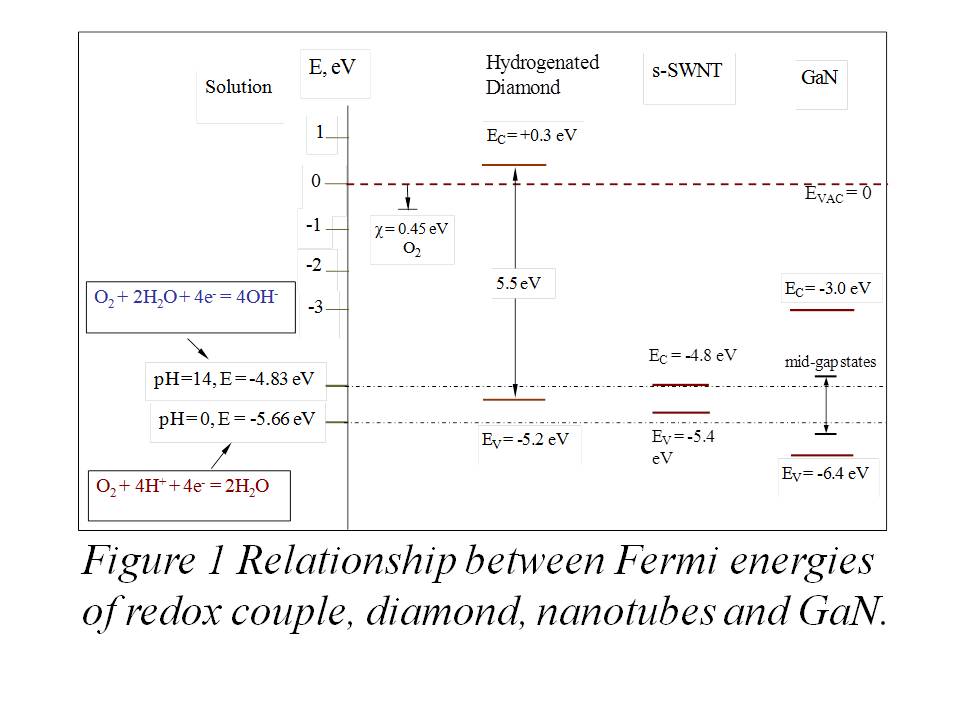