Conference Room 4M (Hilton Chicago)
M. J. Song, K. C. Kwon, K. H. Kwon, D. W. Kim (Hanyang University), and J. G. Park (Hangyang University)
Conductive bridging random access memory (CBRAM) is considering as one of the promising candidate for next generation non-volatile memory (NVM) because it has many advantages such as low power consumption, and large on/off ratio. In particular, CBRAM has a possibility of terra-bit-level nonvolatile memory as a post flash memory due to their 4F2simple structure of a top reactive electrode, polymer electrolyte, and bottom inert electrode, and they showed a bipolar switching memory characteristic.[1] CBRAM is affected by material and state of reactive electrode because CBRAM can operate via forming or breaking metal filament in polymer electrolyte by migrating metal cation. However, only a few materials can be commercially used for reactive electrode of the CBRAM cells. To overcome such limitation, we studied the CBRAM cell fabricated with Ag doped polymer electrolyte. Metal filament was formed by doping Ag ions at Ag-doped polymer electrolyte, instead of migrating metal cation from reactive electrode. [2] Filament forming mechanism for Ag-doped PEO-based CBRAM cells was investigated by fabricating planar type CBRAM cells, which has a structure of Ag-doped PEO (Poly Ethylene Oxide) between Pt electrodes.

As shown in Fig. 1, CBRAM cell was fabricated on SiO2 grown on a Si wafer. Arrays of Pt electrode (width and length, 1,000 and 10 um) were patterned on the 100 nm-thick Pt electrode. Then, Ag-doped PEO was spin-coated on the array of Pt electrode. Note that, the Ag-doped PEO is made by mixing the AgNO3 and PEO with a co-solvent of acetonitrile and ethanol at 30 oC for 3 hrs. AgNO3 is separated into Ag+ and NO3- ions in solvent. Ag+ion locate negative defect site. Ag+ ions move cathode and are reduced to Ag atoms when the positive bias was applied to anode and the negative bias was applied to cathode.

We present NVM operation mechanism of Ag-doped PEO-based CBRAM by revealing of relationship between Ag filament and memory characteristics. 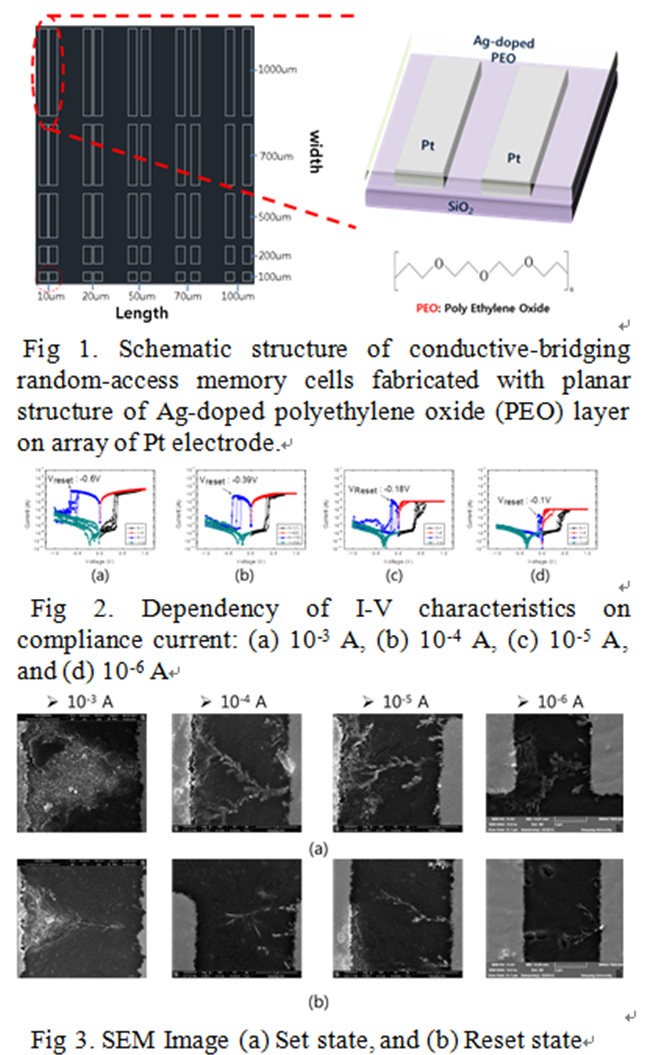