Marquette (Hilton Chicago)
G. W. Hunter (NASA Glenn Research Center), J. Williams, D. B. Makel (Makel Engineering, Inc.), R. G. Johnson (NASA Kennedy Space Center), A. M. Biaggi-Liabiosa (NASA Glenn Research Center), and C. C. Liu (Case Western Reserve University)
A range of aerospace applications require chemical sensing technology [1].  One application area is the monitoring of fuel leaks in launch vehicles. Detection of low concentrations of hydrogen and hydrocarbon fuels is critical in avoiding explosive conditions that could harm personnel and damage the vehicle. Reliable vehicle operation also depends on the timely and accurate measurement of these leaks. Further, the simultaneous measurement of oxygen as well is an important component determining if a hazardous condition exists. Detection of low concentrations of fuel, such as hydrogen or methane, is generally necessary from room temperature to cryogenic ambient, and in air or inert gas atmospheres.  Thus, the development of multiple sensors (a sensor array) to determine the concentration of fuels, such as hydrogen, hydrocarbons, oxygen, and other parameters is necessary for aerospace applications.

Development of Smart Sensor Systems for the detection of leaks has been on-going [1-2]. This work is based on the ability to produce microsensor platforms that can be tailored to measure a range of species. Combined with that effort has been the development of miniaturized hardware and software systems (“Lick and Stick” technology) that can be implemented in aerospace applications. These “Lick and Stick” systems include signal conditioning, data processing, power, and communication in a compact structure, for placement in multiple locations to improve the awareness of an environment. Figure 1a) shows an example this technology: a “Lick and Stick” system composed of a hydrogen, hydrocarbon, and oxygen sensor systems with a microprocessor and communication capabilities. Other sensors such as pressure and humidity can be included. Each sensor is integrated with its own temperature detector and heater for temperature control facilitated by the Smart Sensor electronics.

One method to reduce helium usage is to monitor the hydrogen concentration within the cryogenic fluid transfer line and measure when nonhazdarous concentrations are achieved. This implies that a gas monitoring be mounted in contact with the interior of the cryogenic fluid transfer line and be able to withstand cryogenic temperatures. Measurements of interest include hydrogen and oxygen, but also pressure and humidity.

A cryogenic fluid transfer line gas monitoring system based on chemical microsensors is under development to address this application. The core technology is based on the “Lick and Stick” sensor system of Figure 1a), but major modifications are necessary for this application. A prototype systems is shown in Figure 1b). The sensor elements, such as hydrogen, oxygen, and humidity sensors, are packaged for insertion directly into the cryogenic flow line using the fittings shown. These sensor elements do not need to operate at cryogenic temperatures, but must at least survive exposure to these conditions; sensor operation occurs later during the purge of the fluid transfer line at low temperatures closer to ambient after the cryogen flow. The sensor elements are remotely connected to the Smart Sensor electronics, which operate at ambient conditions.

This paper describes the development of this prototype cryogenic fluid transfer line gas monitoring system, its initial testing, and comparison of results to reference instruments. It is concluded that the use of microsensors for this application have the potential to provide real-time monitoring capabilities in applications such as cryogenic fluid transfer lines, and thus provide a method to monitor and minimize the use of helium in such applications. 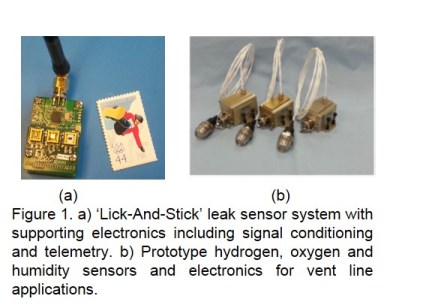