In order to improve safety and durability of the present lithium ion batteries (LIBs), we definitely need to understand the nature of a solid-electrolyte interface (SEI) that is formed at the boundary between negative electrode material and electrolyte in LIBs. The chemical composition of SEI has been usually determined by an ex-situ X-ray photoelectron spectroscopic analysis. However, there are few reports on the structural properties of SEI, such as thickness and density, and their variation with cyclic charge/discharge reactions. In other words, although we have information on “dead” SEI with ex-situanalytical techniques, we still do not know the properties of “alive” SEI and its formation mechanism. This is a highly unsatisfactory situation for further developing LIBs.

Neutron reflectivity (NR) is known to be a powerful technique for estimating thickness and density of an interface between solid and liquid. Nevertheless, since the interfacial reaction is expected to occur within a few nanometer-thickness from the initial boundary, NR with more precise spatial resolution is naturally required for analyzing SEI than that achieved in the conventional neutron sources.

As an electrode for NR measurements, a carbon/titanium multi-layer film was deposited on a silicon substrate by a magnetron sputtering technique. Here, the titanium layer is necessary to increase adhesive force between the carbon electrode and Si substrate. A special electrochemical cell for in-situ NR measurements consists of the carbon thin film as a working electrode, a lithium foil as a counter electrode, 1 mol/L LiPF6 + 1 wt% vinylene carbonate in a 1:1 (v/v) ratio of ethylene carbonate and diethyl carbonate as an electrolyte, and a microporous polyethylene membrane as a separator. An electrochemical reaction was carried out by linear sweep voltammetry (LSV). LSV scans were initiated at the open circuit voltage (OCV) along a cathodic sweep up to 0.05 V. In situ NR measurements were performed during a charging reaction on the surface profile analysis reflectometer (SOFIA) at BL16 of Materials and Life Science Experimental Facility (MLF) in J-PARC. NR was measured as a function of the momentum transfer, Qz = (4πsin θ)/λ , in the Qz range between 0.37 and about 3 nm-1. The obtained NR spectra were fitted with the Motofit analysis package based on a Parratt formalism [1] [2].

After the LSV, the morphology of the carbon surface was clearly changed as expected. Figure 1 shows a contour plot of NR as functions of Qz and potential during the potential sweep from OCV (=2.9V) to 0.05 V.This provides an overall picture for the present NR measurements obtained during potential sweep. As potential decreases from 2.9 V, NR is found to be roughly independent of potential down to 1.0 V. Then, NR decreases with decreasing potential when Qz is fixed. The change in NR with Qz is caused by neutron scattering at SEI.

Figure 2 shows scattering length density (SLD) profiles obtained at potential=1.0 V, 0.5 V, 0.2 V, and 0.05 V. Here, the NR spectra were fitted by a four-layer model. The SLD of the carbon film decreases with negative potential sweep. This means that Li-ion could be inserted into the carbon film electrode because Li has a negative coherent scattering length. As E decreases from 1 to 0.05 V, the width of the carbon film is found to increase from 70 to 84 nm. On the contrary, the boundary between electrode and electrolyte clearly changes with potential, indicating the formation of SEI. As E decreases from 1.0 V, SLD increases form 2.1 to 2.9 (x 10-4) nm-2, while the thickness increases from 18 to 30 nm. This clearly demonstrates the growth of SEI with decreasing potential.

Consequently, using a combination between a NR technique and the intense neutron source, we have successfully observed the formation and growth of SEI at the boundary of the carbon electrode and liquid electrolyte during electrochemical process. Such measurements will provide an insight how to improve the performance of LIBs. 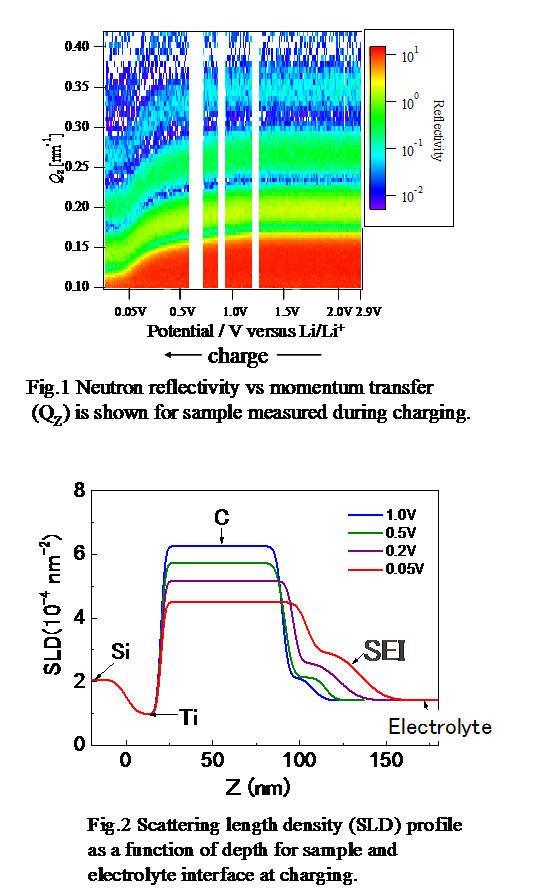