Reduction of the amount of expensive Pt cathode catalyst in PEFCs is essential for their worldwide commercialization. Core-shell structured catalyst, in which Pt monolayer (PtML) shell is formed on non-Pt metal core surface, is one of the key technologies. Furthermore, it has been reported that ORR activity of the PtML shell is enhanced when Pd nanoparticles are used as core materials [1, 2]. Recently, we developed a new process for the Pt shell formation which needs no precise potential control and is suitable for scale-up synthesis of the core-shell structured catalyst (modified Cu-UPD/Pt replacement [3]). We further demonstrated that the ORR mass activity of a carbon supported Pd core-Pt shell structured catalyst (Pt/Pd/C) synthesized by the new process is drastically enhanced with an accelerated durability test (ADT) performed at 80°C [3]. The ORR activity enhancement is considered to be due to a rearrangement of the surface Pt atoms and a decrease in number of low-coordinated Pt atoms associated with oxidative dissolution of Pd from the core nanoparticles. In this study, Pt/Pd/C catalysts with different Pt shell coverages are synthesized via the modified Cu-UPD/Pt replacement process and the influence of the Pt shell coverage on the ORR activity of the catalysts after ADT was investigated.

Pt/Pd/C catalysts were synthesized with the modified Cu-UPD/Pt replacement process [3]. Carbon supported Pd core particles (Pd/C, Pd size: 4.2 nm, Pd loading: 30 wt.%, Ishifuku Metal Industry) were ultrasonically dispersed in 50 mM H2SO4 containing 10 mM CuSO4 and the solution was stirred with co-existence of a metallic Cu sheet at 5°C under Ar atmosphere. After stirred for 5 h, the Cu sheet was removed and K2PtCl4 with different concentrations was added to obtain the Pt/Pd/C catalysts with different Pt shell coverages. The Pt/Pd/C catalysts were characterized by TG, XRF, XRD, TEM, TEM-EDX, CV and XAFS. The ORR activity of the Pt/Pd/C catalysts was evaluated with the RDE technique in O2 saturated 0.1 M HClO4 at 25°C. The ADT was conducted using a rectangular wave potential cycling (0.6 V (3 s)-1.0 V (3 s) vs. RHE) in Ar saturated 0.1 M HClO4 at 80°C for 1,000 cycles. 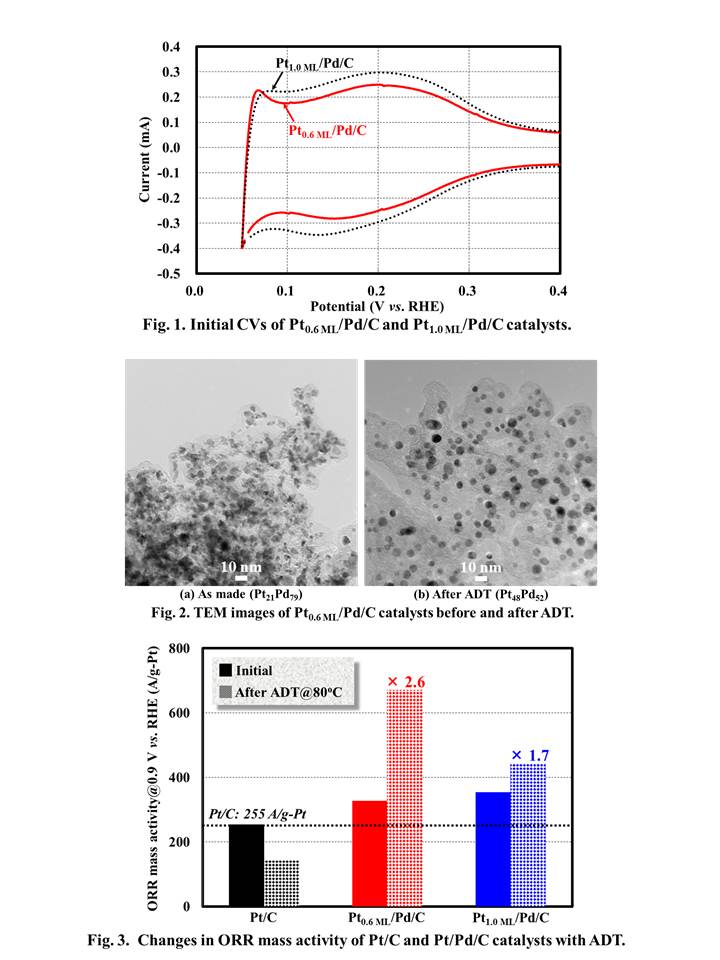