In order to promote the introduction of renewable energy, large-scale energy storage and transportation systems are required. Hydrogen is expected to apply for the energy storage and transportation. Organic chemical hydride materials are prospective energy carriers to solve the issue of hydrogen’s low volumetric energy density. Among them, toluene (TL)/methylcyclohexane (MCH) system has been focused due to the easy handling and the low toxicity. Recently, researches of one-step electrolytic hydrogenation of TL have just been started[1].

DSA® type anodes composed of IrO2-based electrocatalyst coated on Ti which have excellent activity and extremely high durability for oxygen evolution reaction (OER)[2] is required as a counter electrode of electrolytic process. It is well known that some organic additive lead serious degradation of the anodes[3]. IrO2-Ta2O5/Ti would be a good candidate, because the overpotential of IrO2-Ta2O5/Ti in sulfuric acid with organic compound contamination is lower than that of IrO2/Ti [3]. However, the OER activity of IrO2-Ta2O5/Ti would not still be enough and the effect of TL and MCH on the activity and durability have not been clarified.

In this study, activity of IrO2-Ta2O5 based Ti electrodes whose Ta is replaced by Zr was investigated in sulfuric acid with TL contamination.

The precursor of the electrocatalyst was n-butanol solution of H2IrCl6・6H2O, Ta(C4H9O)5 and Zr(C4H9O)4 with nominal composition of Ir: Ta: Zr= 50: (50-X): X (0 ≦X < 50) in mole fraction. A pretreated Ti plate was dipped in the precursor, and dried at 100 oC for 10 min. Then it was thermally decomposed at 500 oC for 10 min. The process of the dipping, drying, and decomposition were repeated several times to get around 10 g m-2 of IrO2 loading. Finally, it was baked at 500 oC for 1h. The loading was evaluated by a X-ray fluorescent analysis.

Polarization of the OER was evaluated with 5 mV s-1 of potential sweep between 1.2 and 2.0 V vs. RHE in 1 M H2SO4 with and without saturated TL at 60oC. A counter electrode and a reference electrode were platinum wire and reversible hydrogen electrode, respectively. Resistance of the electrolyte and double layer capacitance was evaluated with AC impedance method.

The current densities based on Cdl on Ir50Ta(50-X)ZrX-Oxide/Ti at 1.55 V vs. RHE in 1 M H2SO4 with and without saturated TL were shown in Fig. 2. They increased with Zr content, and the decrement of current density by TL contamination was kept constant in spite of change in Zr content. 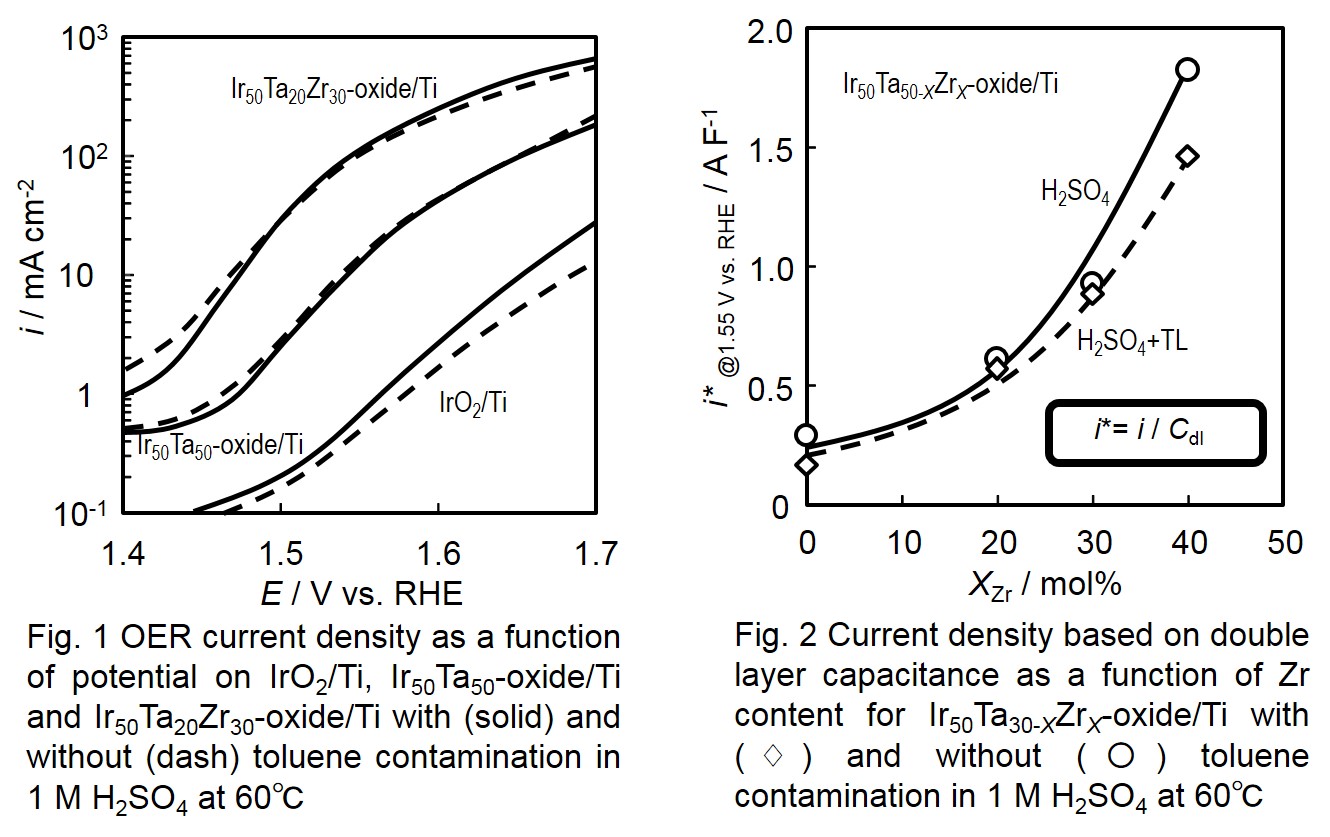