Si containing alloys are promising candidates as anode materials for lithium ion batteries. This is owing to the high theoretical capacity of Si (2194 Ah/L, compared to 764 Ah/L for graphite) [1]. Pure Si, however, suffers from severe volume expansion (280% in the fully lithiated state) during the lithiation/delithiation process [2]. High internal stress in the electrode can lead to particle cracking, poor electrical contact and thus poor cycling stability. The use of active/inactive composites is an efficient way to reduce volume expansion and improve cycling performance [1,3].

In the present study, NixSi1-x (0≤x≤0.65) thin film libraries were synthesized by combinatorial sputtering.  A structural and compositional analysis of the films and the effect of composition on their electrochemical behavior are presented.  It was found that the capacity of NixSi1-x thin films could not be explained by the lithiation mechanisms proposed in any of the previous studies of Si-TM films.  Instead, it was found that increasing Ni content suppressed the average lithiation voltage, resulting in capacity reduction, however all the Si in the alloy remained active.

Selected XRD patterns of two Ni-Si thin films are shown in Figure 1. All the patterns have two broad diffraction peaks at around 28° and 49°, indicating the amorphous nature of sputtered thin films. With the increase of Ni content, the intensity of the peak at 49° increases and its position shifts slightly to lower angle.

The apparent suppression in discharge voltage by increasing Ni content causes a reduction in the film capacity.  This would suggest that some of the Si is becoming inactive, but this is not the case.  While peak B becomes truncated by the voltage suppression the capacity of peaks A/A' remain unaffected and therefore can be used as a measure of active Si in the alloy.

Figure 3 shows the percent active Si present in the Ni-Si films calculated on the basis of the capacity under peak A'.  According to this model all Si atoms are active to Li.  Above x = 0.4 the amount of active Si decreases only because peak A also becomes truncated for these compositions. The model reported by Fleischauer et al. [4] does not explain the behavior observed here and is also shown in Figure 3 for comparison.

Here the electrochemistry of Ni-Si films will be discussed.  It will be suggested the lithiation voltage suppression observed in these films arises from internal stress that arises between the expanding Si active phase and the inactive Ni phase.  This has important consequences for other Si/inactive alloy negative electrodes. 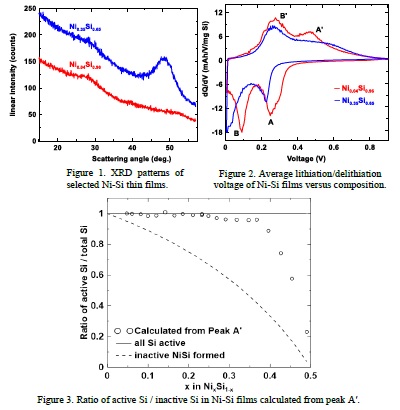