It is well-kown that LiSi alloy forms by electrochemical insertion of Li into Si substrate [1]. Since the high performance of Li insertion amount into Si is theoretically predicted [2-4], LiSi alloy formation is very attractive interest not only in the Li ion battery research field but also fundamental electrochemistry area [5]. However, there is no report to investigate in detail the Li insertion process into Si substrate.

X-ray photoelectron spectroscopy (XPS) method was often used for electronic state analysis of LiSi alloy [5]. However, information from XP spectrum is limited about inner shell electron and then, electronic state of LiSi alloy has not been made clear yet. On the other hand, soft X-ray emission spectroscopy (SXES) provides us the information about valence band electron.

After the surface of n-Si(111) substrate (phosphorous-doped, 1 – 10 W cm) was hydrogen terminated [6], Li-Si alloy was prepared in the glove box under Ar atmosphere as below. The potential of the n-Si(111) electrode was negatively scanned from open circuit potential (OCP) (ca. 2.4 V vs. Li/Li+) to 0.01 V with a scan rate of 1 mV s-1 in the electrolyte solution (1 M LiPF6 in ethylene carbonate (EC) and dimethyl carbonate (DMC) (EC : DMC = 1 : 1, v/v%). At 0.01 V, the potential was kept for several insertion periods. After that, the potential was back to OCP, namely the n-Si(111) electrode was disconnected.

After washing, the sample was transferred to the SEM chamber under Ar atmosphere without any exposure in air. Then, SEM and SXES measurements were carried out.

Figure 1 shows time dependences of current density and electrode potential during the Li insertion into the n-Si(111) electrode. When the electrode potential was negatively scanned from OCP, small cathodic current, which is due to the formation of solid electrolyte interphase (SEI), was observed around 1.50 V. Around 0.05 V, large cathodic current due to the Li insertion flowed and it continued to flow when the potential scan was stopped at 0.01 V.

Surface SEM image showed that the shape of the surface layer was a triangular pyramid. The longer the insertion period, the larger the triangular pyramid. Cross sectional SEM image shows that Li inserted Si(111) consists of two layers and the boundary between the first and second layers were relatively flat. In the first layer, only one peak was observed around 90 eV in the emission spectrum in Si L2,3 region, suggesting that Li rich LiSi alloy formed in the first layer. On the other hand, three peaks were observed in the spectrum of the second layer and its shape is similar to that of bulk Si. The longer the insertion period, the thicker and thinner the first and second layers, respectively. More detailed analysis is now under investigation.

Figure 1  Time dependences of current density and electrode potential of n-Si(111) electrode, measured in mixed solution of EC and DMC (1:1) containing 1 M LiPF6 with a scan rate of 1 mV s-1. 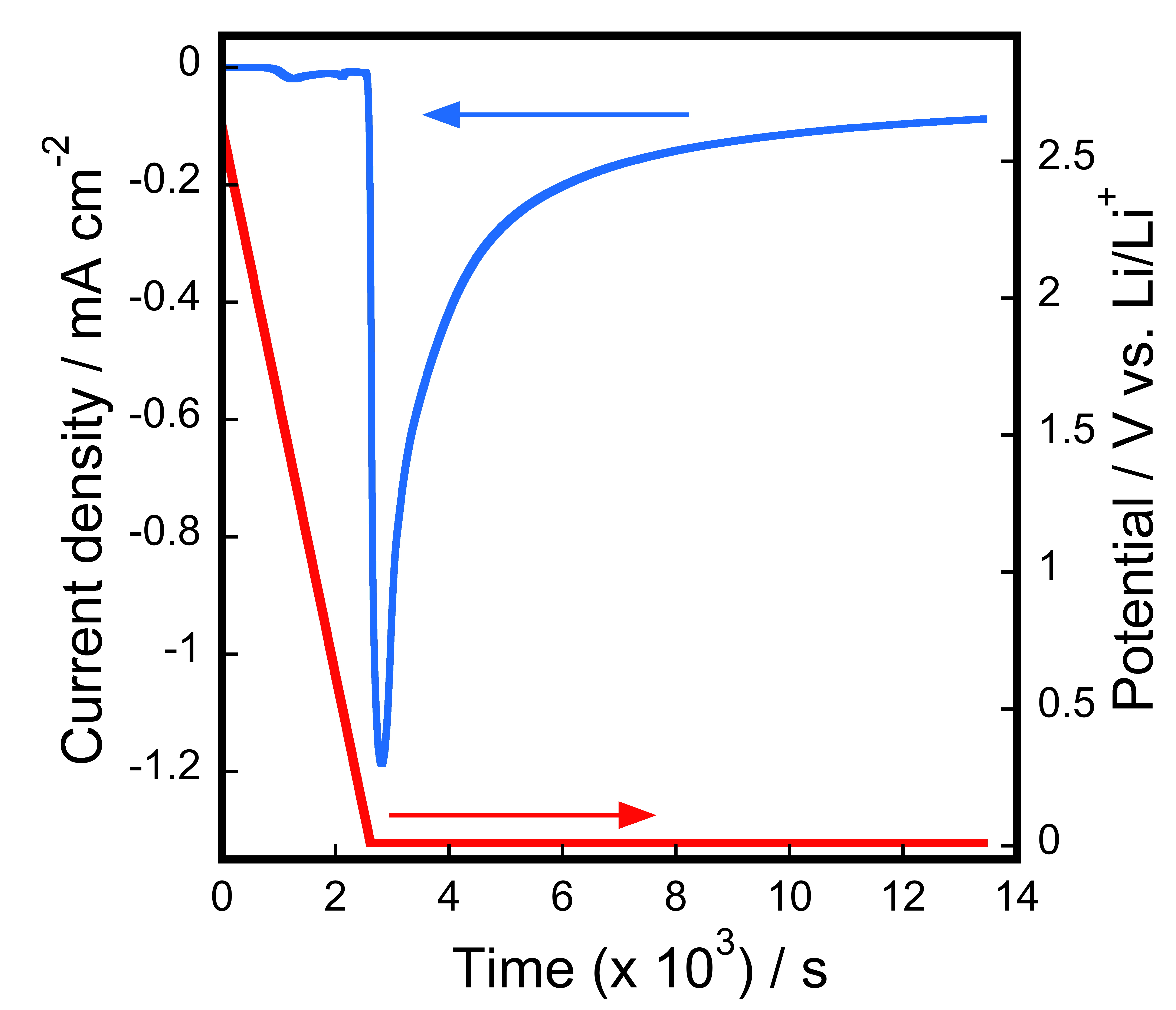