Vanadium oxides have been investigated as pseudocapacitive electrode material because of their low cost, abundance in nature and high energy capacity [1-2]. The performance of the electrodes strongly depends on the fabrication methods. However, a technique that can produce vanadium oxide with high performance, low cost and ready to scale up is yet to be developed. In this work, we demonstrate a novel and simple chemical method to deposit vanadium oxides with potential applications in electrochemical capacitors.

A thin Titanium foil was ultrasonically cleaned by acetone and immersed in a 20ml 0.5M VOSO4solution. 0.3ml 1M NaOH was added to initiate a chemical precipitation process. The titanium substrate was left un-stirred in the solution for 5 days until the surface was covered by a greenish film.

Scanning electron microscopy (SEM) images were taken to examine the surface morphology. Cyclic voltammetry (CV) was used to characterize the electrochemical performance of the samples in 1 M LiCl solution.

The cycle life of vanadium oxide electrode was shown in Fig.2, where the CV of the 1st cycle, 1000th cycle, 2000th cycle and 3000th cycle were compared. The result depicted a very rectangular and ideal capacitive behavior, suggesting the deposited vanadium oxide is suitable in electrochemical capacitors application. As a comparison, the CV of the Ti substrate showed very little capacitance. Moreover, it showed little change in CV profile from 1st to 3000thcycle, indicating that the electrode was stable for long time cycling in 1 M LiCl. There was a slight decrease in capacitance after 3000 cycle (ca. 10%), likely due to the some degradation on the surface. However, since vanadium oxide was usually reported to have poor stability due to pulverization and dissolution [1], the results in Fig. 2 is still very promising.

In addition to the morphology and electrochemical characterizations, the composition and crystal structures of the produced vanadium oxide were also investigated. These results will be presented as well. 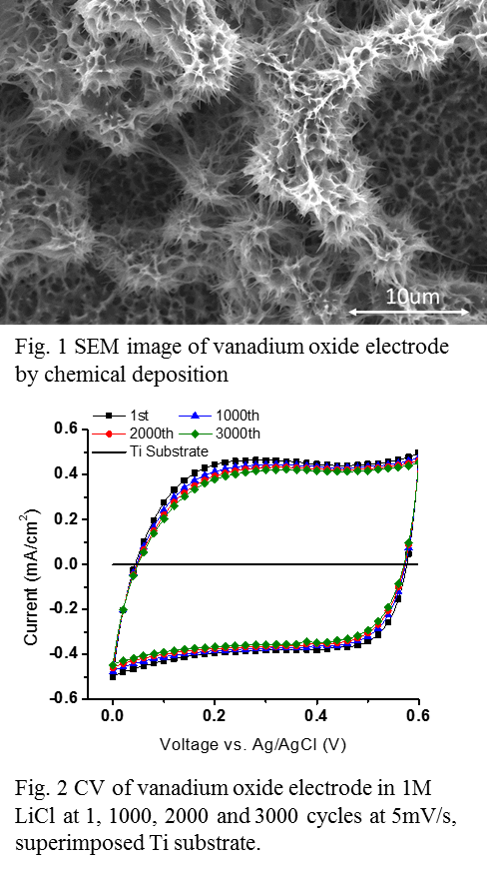