707
Effect of Crevice Length on Potential, Current and pH Distribution in the Crevice Formed in Galvanic Coupling Between AA7050-T7451 and SS316

102-A (Phoenix Convention Center)
C. Liu, V. N. Rafla, J. R. Scully (University of Virginia), and R. G. Kelly (University of Virginia)
Stainless steel fasteners connecting aluminum-alloy components in airframes are frequently encountered after repair. Airframe components are exposed to atmospheric marine environments which lead to the formation of a thin surface electrolyte containing chloride species. This thin film / galvanic couple configuration inherently aids in the trapping/wicking of electrolyte into a tight crevice. Severe localized corrosion can result from the galvanic cell established between the aluminum alloy component and the stainless steel fastener. There are several external variables (crevice solution chemistry, crevice length, conductivity, and etc.) affecting electrochemical distributions in the crevice of galvanic coupling. Understanding the effects of such variables will help quantitatively characterize the corrosion behavior of the structure and inform decisions regarding mitigation strategies.

The Finite Element Method (FEM) is a numerical tool that has been widely used in localized corrosion modeling [1]. The objective of the modeling is typically calculation of the potential and current distributions as these can be related to critical potential thresholds and rates of attack. Recently FEM-based computational modeling [2-5] has been applied to atmospheric localized corrosion to efficiently assess the effects of the variables and the ability of mitigation strategies to provide protection.

In this work, a combined numerical and experimental approach was applied to investigate how the location and size of the cathodic surface affects the potential, current and pH distributions within the crevice. Initial work has focused on studies in full immersion to provide a bounding solution for atmospheric conditions in which there is a fundamental limit to the amount of cathode current a surface can supply to a localized corrosion site [6]. A simplified geometry of the crevice formed between AA7050-T7415 and SS316 was used, shown in Figure 1. For the experimental portion of the work, the size of the anode (AA7050-T7451) was fixed, and the effects of increasing the size of the cathode (SS316) on the pH distribution within the crevice were assessed.  Of particular interest was the critical length beyond which the pH of crevice solution turned from neutral/alkaline to acidic. Electrochemical testing was conducted on the AA7050-T74 and SS316 in artificial seawater solutions adjusted to different pH values.   These experimentally determined electrochemical kinetics served as boundary conditions in the modeling work. Corrosion damage after the tests were characterized by optical microscopy. For the modeling portion of the work, the Laplace Equation was used as the governing equation for calculations under steady state. For a specific ratio of anode length to cathode length, the potential and current density distributions were obtained by applying the electrochemical kinetics relevant for the corresponding pH value as boundary conditions. Maps of the potential/current density and pH distributions were examined to determine their correlation and their effects on the crevice corrosion formed in the galvanic coupling. The results of the experimental and modeling work will be presented and discussed.

Figure 1: A simplified geometry of crevice formed between AA7050-T7415 and SS316. The size of the external cathode increases from 0 to a length which corresponds to largest area ratio. 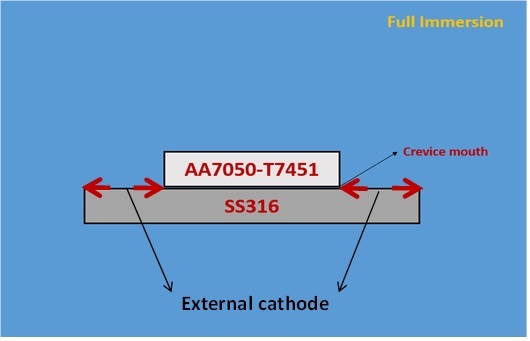