West Hall 1 (Phoenix Convention Center)
Y. Aoyama, K. Suzuki, Y. Tabe (Hokkaido University), T. Chikahisa (Hokkaido University), and T. Tanuma (Asahi Glass Co., Ltd.)
Micro porous layers (MPLs), which have hydrophobic characteristics with carbon powder and a hydrophobic polymer (PTFE), have been demonstrated to promote water removal from the reaction area and to improve the cell performance. Recently, some studies reported that the cell with hydrophilic MPL with micro-fibers show better cell performance than hydrophobic MPL in a wide range of humidity conditions (1). In this study, microscopic distribution of water in the cross-section of the cathode side hydrophilic MPL was observed by a freezing method and cryo-SEM to discuss the mechanism of the improved cell performance.

A smaller size of single cell with an active area of 1.8 cm2 (0.9 cm × 2.0 cm) was used in this study because the cell must be frozen and disassembled rapidly for the freezing method. Two types of membrane electrode assembly (MEA) with different thickness of the hydrophilic MPL were used in this study: one with a thin MPL about 10μm and one with a thick MPL about 30μm. These hydrophilic MPL were composed of carbon fibers and ionomer. As the hydrophilic MPL composed of conventional carbon blacks did not improve the cell performance, carbon fibers were applied as the MPL material. The hydrophilic MPL was only applied at the cathode side. The interface between the cathode side MPL and the catalyst layer (CL) were fabricated by the gas diffusion electrode (GDE) method (1). These MEA were experimentally produced by Asahi Glass Co., Ltd. In this study, the experiment was consisted of the cell performance measurement and the observation of water distribution in the hydrophilic MPL. The freezing method and the cryo-SEM were used for the observation (2). The freezing method immobilizes the water in the cell as ice by rapidly freezing the cell just after steady-state operation is achieved, and the ice can be visualized with high spatial resolution by using the cryo-SEM.

Figure 2 is the cryo-SEM images of the cathode hydrophilic MPL before operation. The structure of the hydrophilic MPL with carbon fibers is similar to that of the gas diffusion layer (GDL) rather than the conventional hydrophobic MPL with carbon blacks. Figure 3 is the cryo-SEM images of the whole thin hydrophilic MPL after the steady-state operation. Large amount of ice appears to be observed in the pores of the MPL, and the ice distributes uniformly inside the thin MPL from the CL side to the GDL side. Figures 4(a) and (b) are the cryo-SEM images of the thick hydrophilic MPL after the operation; (a) is inside the MPL at the CL side, and (b) is inside the MPL at the GDL side. In the case of the thick MPL, there is no ice at the GDL side (Fig. 4 (b)), while the ice distribution at the CL side is similar to that of the thin MPL (Fig. 4 (a)). These observation results suggest that the difference of the cell voltage and the water distribution in two types of MEA may be caused by the difference in the ability to evaporate water inside the MPL. The hydrophilic MPL with fiber structure may be considered to promote water evaporation because the fiber structure increases the surface area of water. In the case of thin MPL, water accumulates inside the whole MPL because the thickness of the MPL appears to be inadequate to evaporate water, and results in the blockage of the oxygen supply. In the case of thick MPL, water appears to evaporate inside the MPL before reaching to the GDL side because the thickness of the MPL appears to be adequate to evaporate water. It may be concluded that the thick hydrophilic MPL gives better anti-flooding performance at high current densities due to the high ability to evaporate water. 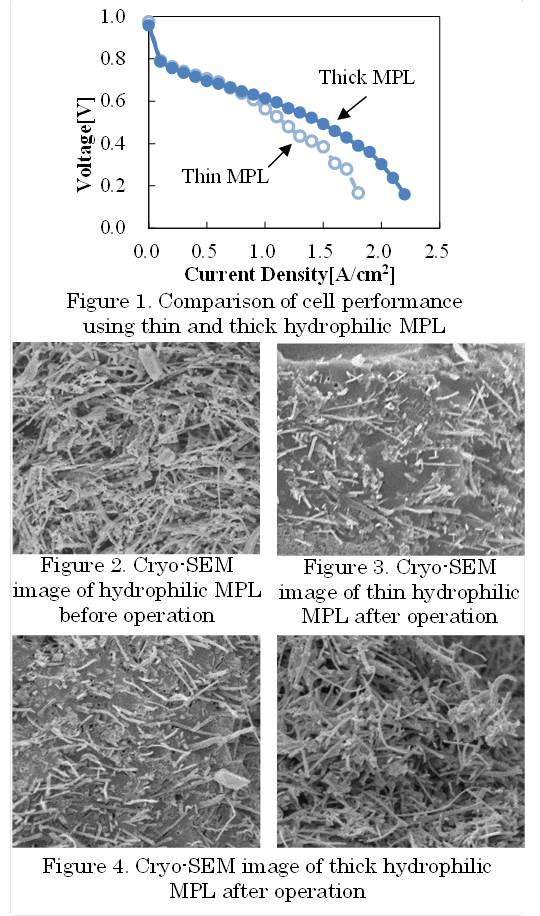