GO may be synthesized by the modified Hummer’s method[2], where a mixture of potassium permanganate and concentrated sulfuric acid forms the ground pillar for the oxidation of graphite to GO. rGO can be synthesized by a broad range of methods, with the chemical and the thermal reduction routes being very common[3].

The synthesis mechanism of GO by the modified Hummer’s method is still unknown, even though the active oxidizing species dimanganese heptoxide has been suggested as the main redox active specie[4]. The mechanism of the thermal reduction of GO to rGO is also unknown. We present results from in situ synchrotron X-ray diffraction (XRD) experiments of  syntheses and thermal reduction of GO.

The in situ synthesis of GO was performed by placing a mixture of permanganate and sulphuric acid in a capillary next to graphite. The synthesis was then initiated by gently pushing the fluid mixture into the powder with N2 gas. The in situ XRD of the GO synthesis showed how the oxidation reaction proceeds in three separate stages, as seen in Figure 1. The first stage was the dissolution of potassium permanganate, followed by an intercalation stage and subsequent formation of crystalline material. The GO 001 diffraction peak was observed early during the synthesis, in the second stage, and the intensity of the 001 diffraction increased during the third stage.

The in situ XRD results of the thermal reduction of GO to rGO showed a dependence on the temperature ramping and addition of diamond powder. Syntheses were measured at 1, 5, 10, 20 and 50 °/min temperature ramps. The syntheses were performed in a capillary with GO being heated by a hot air blower under constant N2 flow. Three stages were observed for the reduction process; a GO stage, an amorphous stage and a rGO stage. The change in stage was defined from the changing of the d-value of the initial 001 GO peak, see Figure 2. The initial GO diffraction pattern changed during the heating and more diffraction peaks were observed. The results showed that the nature of the rGO material depends heavily on both temperature and additives.

These in situ XRD studies revealed the crystalline intermediates and final product of synthesis by a modified Hummer’s method and the diffractional change during the thermal reduction of GO. The stages observed for both syntheses illuminate how important it is to consider the experimental parameters dependent on the application; they might even have to be optimized separately. As the future use of GO and rGO is expanding and the commercialization of these products are enhanced, the syntheses mechanisms may be of increasing interest. 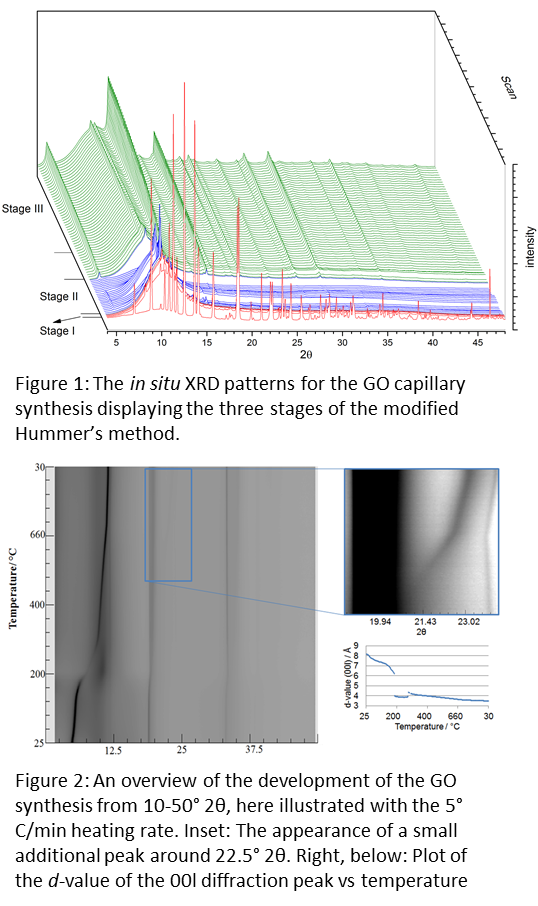