Core/shell structure Pt-M alloys catalysts are anticipated to be applied in PEMFCs cathode catalyst layer owing to their high catalytic activity than pure Pt [1]. However, dissolution of Pt and M is a significant problem, which causes the performance loss of PEMFCs [2], when the potential loads such as on-off cycle and load cycle were applied to the cathode catalysts. Therefore, understanding the detailed dissolution mechanism of Pt and M from Pt–M alloy catalysts is very important to improve durability of PEMFCs under its operating conditions. In this study, we investigated that the dissolution behavior of Pt-50 at% Fe alloy (Pt50-Fe50) under potential cycling with channel flow multi electrodes (CFME), and clarify the effect of potential range to the dissolution behavior of Pt50-Fe50.

Pt50-Fe50 (1 mm x 5 mm) used as working electrode (WE), and two Au plates (1 mm x 2 mm) were used as collector electrodes (CEs). These electrodes were embedded into CFME cell by epoxy resin, and kept in parallel. The gap distance between WE and CEs was 100 μm, and the gap between two CEs was 1 mm.

Dissolved Fe2+ from Pt50-Fe50 are monitored by the current of the CE.

Fig. 1 shows Fe2+detection current (iFe(II)) change in anodic scan during potential cycling, and black, red, and blue lines represent results of Eupper = 1.4 V, 1.0 V, and 0.6 V, respectively. In case of Eupper = 1.4 V, Fe2+ detection peak was observed between 0.3 – 0.7 V. Similarly, Fe2+ detection peak was appeared in same region when Eupper set at 1.0 V, however, the peak height was much smaller compared with the peak observed when Eupper =1.4 V. From these results, Fe dissolution as Fe2+ was not suppressed during potential cycling when Eupper was 1.0 and 1.4 V. On the contrary, iFe(II) kept constant value between 0.05 – 0.6 V when Eupper set at 0.6 V, and it means that Fe dissolution as Fe2+ was suppressed during potential cycling. The similar trend was observed in the cathodic scan. 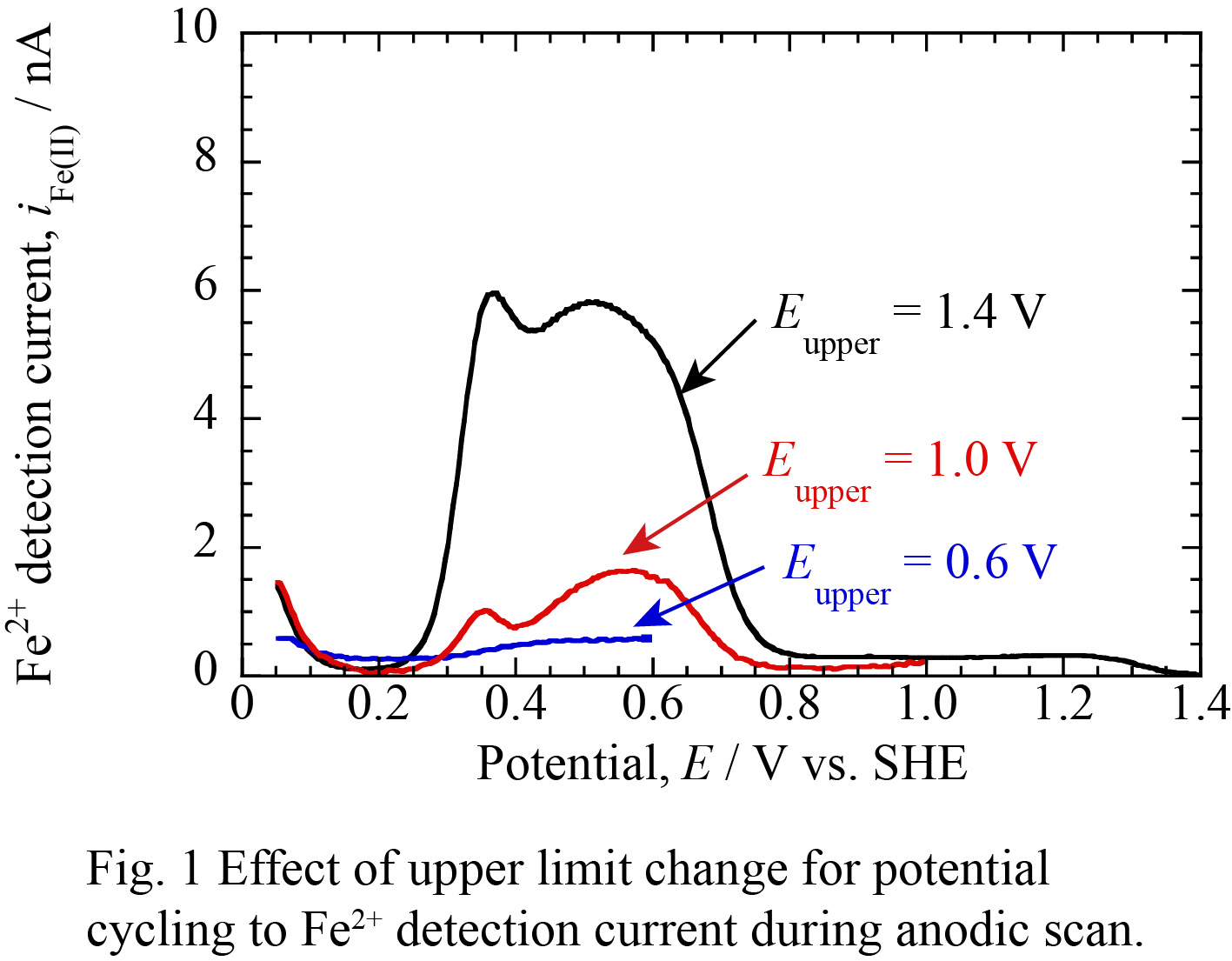