213-B (Phoenix Convention Center)
P. Polczynski (Department of Chemistry, University of Warsaw), R. R. Jurczakowski (University of Warsaw, Department of Chemistry, CNBCh), and W. Grochala (Centre for New Technologies, University of Warsaw)
Persistent Organic Pollutants (POP) are hazardous environmental contaminants of mainly synthetic origin, highly toxic and chemically inert. They accumulate in the environment and in living organisms. The highest concentrations are found in animals at the top of the food chains. The most commonly human health effects related to POPs are skin conditions, liver damage, impaired fetal growth1 and further dysfunctions in intellectual development of the child.2 Most POPs do not ignite themselves and they cannot be combusted. Incineration process result in incomplete combustion despite a large excess of fuels and oxygen. This lead to the formation of dioxins, furans and PCBs, which are known human carcinogens. Therefore it is very important to find an alternative processes of POP neutralization. Mediated Electrochemical Oxidation has been proven to be an efficient approach, in which those dangerous substances are electrochemically combusted under ambient conditions. Mediated electrochemical oxidation is an indirect electrolysis, where pollutants are oxidized through the mediation of some electrochemically generated redox reagents, which act as an intermediary for electrons shuttling between the electrode and the target molecule. This technique enables the possibility to oxidize an (electro)inactive compounds.3

In this research, for mediated electrochemical oxidation, we have chosen silver(II) compounds as redox mediators.4 As reported by us previously, the redox potential of the system Ag(II)/Ag(I) can reach up to 2.9V in sulfuric acid media.5 Moreover the average lifetime of the produced radical oxidant was estimated to be in order of seconds.6 The catalytic activity of Ag(II) was characterized mainly by using electrochemical methods with a particular emphasis placed on Electrochemical Impedance Spectroscopy (EIS). Recently, we have derived the exact solution for the analysis of catalytic systems. Kinetics of the pseudo-first order chemical reaction with depolarizer reproducing was included in the model using the proposed element.7

Here we show that the key parameters of the studied systems, such as both heterogeneous and homogeneous rate constants, which are limiting factors for the electrochemical combustion efficiency, can be readily obtained even from a single impedance spectrum.7 Exemplary results for electrocatalytic oxidation of 1,2-dichlorobenzene are shown in Figure 1. Before the addition of the pesticide, two semicircles are observed on the Niquist plot of impedance registered in sulfuric acid containing silver(I) (-○-). The first semicircle, related to the coupling of the charge transfer resistance with the double layer capacitance, is followed by the second skewed semicircle characteristic for the Gerischer Impedance and related to catalytic oxidation of the acid.6 The determined homogenous reaction rate constant for the latter is equal to k=0.0100±0.0003 dm3∙mol-1∙s-1. The nonzero value is related to a finite half-life time of the electrogenerated oxidizer. After addition of the pesticide (-●-), the second semicircle decreases markedly. According to our theoretical model, this is related to a higher rate constant of the chemical homogeneous step.7 First semicircle is also smaller because the resistance of the charge transfer is inversely proportional to the square root of the homogeneous reaction rate constant.7 The homogenous reaction rate constant of pesticide oxidation is equal to 120±5 dm3∙mol-1∙s-1, which is four order of magnitude higher than that observed in pure sulfuric acid. This result indicates that electrogenerated Ag(II) effectively oxidize 1,2-dichlorobenzene. Products and possible mechanism of this reaction will be discussed. 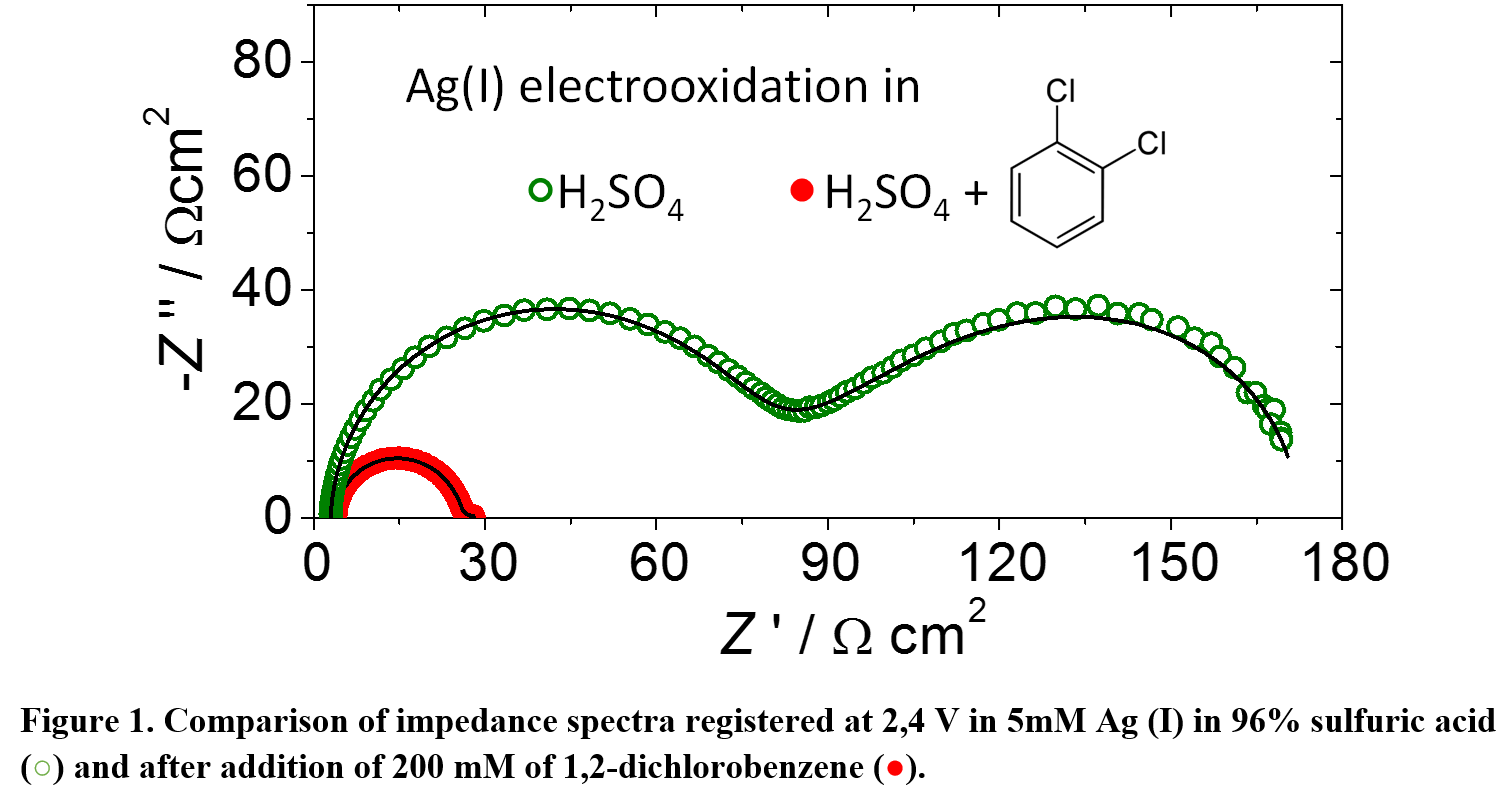