Phoenix West (Hyatt Regency)
K. C. Mishra (OSRAM SYLVANIA), A. Piquette (OSRAM SYLVANIA), P. C. Schmidt (Universität Darmstadt), and K. H. Johnson (Massachusetts Institute of Technology)
The electronic structures of aluminum in bulk, thin film and nanoparticle forms were calculated and compared in order to understand how the optical properties change with the dimensionality of the system.  The band structure calculations were performed using the Vienna ab initio simulation package (VASP) based on the density functional theory (DFT)[1] and the projector augmented wave (PAW)-method.[2] We used an exchange-correlation potential Vxc within the generalized gradient approximation (GGA), where Vxc depends on the total electron density ρ(r) and the gradient of ρ(r), namely the Perdew-Burke-Ernzerhof (PBE) functional.[3]

The calculated band structure diagrams for each of the three forms are shown in Figure 1.  The z-direction was chosen as the direction along which periodicity of the lattice breaks down in going from bulk to thin film structure.  In order to describe how the electronic structures of a periodic system evolve with spatial confinement, we have used tetragonal unit cells constructed from the lattice parameters of the conventional fcc unit cell in these calculations.  Due to the absence of any bound d-like states, the progression from bands in the bulk to subbands in thin films and discrete energy levels in nanoparticles could be easily followed.  Every energy band from the bulk splits into multiple bands for the thin films, referred to as subbands and discrete energy levels for nanoparticles. These subbands of the thin films can be noticed on comparing the lowest band between M and Γ points in the band structure plots of states associated with the bulk and thin films in Figure 1. The discrete structure of the energy levels along the kz-direction can be seen from the dispersion of the subbands along the Γ-Z direction.  The nearly parabolic band along the Γ-Z direction in the bulk is replaced by a number of flat bands corresponding to discrete energy levels resulting from the confinement along the Z-direction.  The density of states (DOS) and partial density of states (PDOS) were also calculated and will be discussed from the perspective of optical properties of this metal.

Figure 2 shows the calculated values of the imaginary part of the dielectric function, ε2, as the system changes from bulk to thin film to particle.  The free electron contribution is not included, and the peaks are due to interband transitions entirely.  For the bulk case, the minor peaks at E > 2 eV appear to be varying randomly and are probably artifacts of calculation.  Most likely there are only two meaningful peaks, one being at 0.5 eV and the other at 1.5 eV.  For the thin film in the x-direction, ε2 has a form that is somewhat similar to that seen in the bulk with a slight shift in the lower energy peak.  This similarity is expected since the system in not confined in the x- or y-direction.  On the other hand, ε2 for the thin film in the z-direction exhibits a broad peak at ~1 eV and another peak at ~2 eV, which is significantly different from either the bulk or thin film in the x-direction.  Finally, Figure 2 also shows ε2 for the nanoparticles, and with confinement in all directions, the shape of the function differs from both the bulk or thin film case.

In this talk, we will discuss the optical properties of this interesting metal based on our calculations, and the effect of spatial confinement. 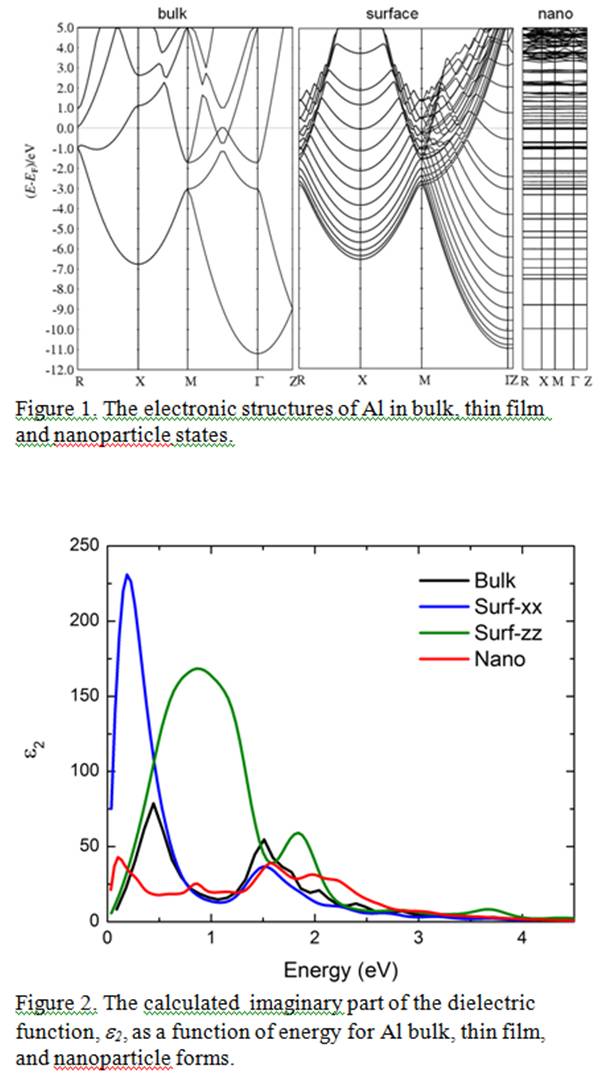