In recent years, natural energy sources such as solar and wind power have been introduced into the electric grid. However, the wind and solar power suffer instability with respect to changes in the weather. As the proportion of these energies increases, adequate controls will become necessary to stabilize the grid. Hydrogen generation systems, which employ electrolysis techniques, are expected to be used as large-capacity power storage facilities with the ability to stabilize the electric power supply. In particular, high-temperature steam electrolysis using solid oxide electrolysis cells (SOECs) can generate hydrogen with high efficiency(1—3), because the heat from the overpotential can be recycled as a heat source for the electrolysis reaction. In addition, due to its endothermic reaction, temperature rise of the SOEC will be suppressed. On the other hand, to utilize such the endothermic effect, an understanding of the temperature distribution and its response of an SOEC is not sufficient. Especially, temperature distributions of the micro-tubular SOEC were more comprehensive than that of planar SOEC, because the positions of the anode and cathode current collectors were asymmetrically placed.

The model calculates heat-mass-charge transports and electrochemical reactions, simultaneously. The schematic drawing of the numerical model is shown in Fig. 1. The microporous cathode electrode consists of a mixture of Ni and (ZrO2)0.92(Y2O3)0.08 (YSZ); the electrolyte consists of a dense layer of YSZ; and the microporous anode electrode comprises a mixture of La0.8Sr0.2MnO3(LSM) and YSZ. Current collectors were platinum (Pt). The thicknesses of anode electrode, electrolyte and cathode electrode were 200um, 20um and 20um, respectively. The cell length is about 50 mm, with an outer diameter of about 2 mm. Parts of insulator (at z = 0.0~5.0 mm and z = 45~50 mm) were given larger heat capacity, because there are gas sealing material in those places.

A mixture of hydrogen and steam (hydrogen/steam ratio = 1) was supplied to anode, and air was supplied to cathode. The operating temperature was 1123K. For the analyses of temperature response, current loads were changed from 0.0 A/cm2 to 0.2 A/cm2, 0.4 A/cm2 and 0.6 A/cm2. Experiments of micro-tubular SOEC were carried out under the similar conditions.

In Fig. 2, the numerical and experimental i - V curves were compared. The electron voltage difference of the anode electrode and a left end (z = 0 mm) of the cathode electrode was E1, and that of the anode electrode and a right end (z = 50 mm) of the cathode electrode was E2. The calculated E1 and E2 were a good agreement with the experimental ones. The steady state temperature distributions of current densities of 0.2 A/cm2, 0.4 A/cm2 and 0.6 A/cm2 are shown in Fig. 2 (a), (b) and (c), respectively. The axis of Fig. 3 was corresponding to that of Fig. 1. The local temperature gradients were larger at the end of the cathode (Ni + YSZ) current collecting side of the SOEC, because there was no endothermic reaction in the non-active area (z = 40 ~ 50 mm), and a heat was generated by electronic resistance in that area. In the active area ( z = 10 ~ 40 mm), heat generation and absorption were occurring. In the gases supplied side non-active area (z= 0 ~ 10 mm), there was no endothermic reaction and any heat generations.

For the unsteady analysis, the local temperature responses of a current density condition of 0.4 A/cm2 were shown in Fig. 4. The temperature response at z = 40 mm was slower than that of z = 10 mm, because that at z= 40 mm was affected by current collecting side insulator, which have the larger heat capacity. 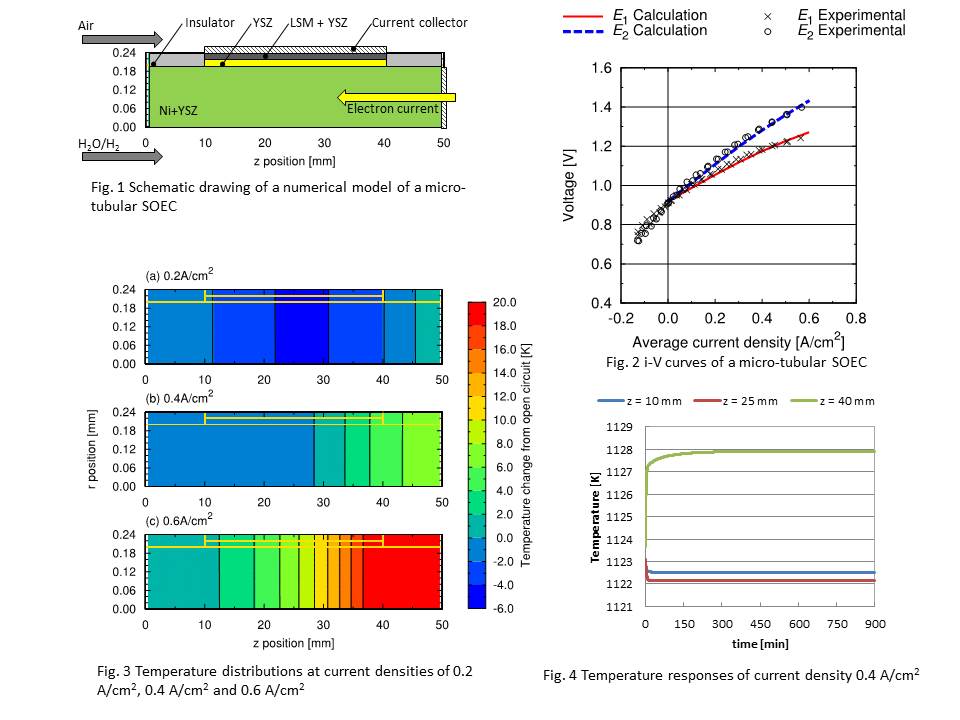