Generally, electrolyte additives are used in order to effectively stabilize SEIs. Lithium bis-oxalato borate (LiBOB) is one example of such an effective additive that forms stable SEI on electrodes to inhibit the degradation of the graphite anode, improving the capacity retention during the cycling test at high temperature. Detailed mechanism on the impact of LiBOB additive, however, remains unknown. We, therefore, analyzed the SEI of graphite negative electrode with and without LiBOB by using Hard X-ray photoelectron spectroscopy (HAX-PES) which is suitable to analyze over-all structure of deposited SEIs with deep probing length. In addition, we performed NMR to confirm chemical composition of D2O-extracted components of SEIs.

An electrolyte that consists of standard 1 M LiPF6 salt dissolved in a mixed solvent of ethylene carbonate and diethyl carbonate (EC / DEC) in a 3:7 volume ratio was used. 3 wt% of LiBOB additive (Sigma-Aldrich Co. LLC) was added into the electrolyte. The coin-type cell, which is composed of a cathode electrode LiNi1/3Co1/3Mn1/3O2, a graphite anode and polyethylene separator, were assembled with different electrolytes in an argon-filled glove box. Charge-discharge tests were repeated for 50 cycles in the potential rage of 3.0-4.2 V at 50 °C at a charge/discharge rate of 1C. Then, the cell was disassembled and the anode was retrieved, and repeatedly washed with DEC in an argon-filled glove box. The HAXPES measurements were carried out at the BL46XU beamline at SPring-8.

First, we note that the graphite peak (P1) in the C 1s HAXPES was still observed spectra even after 50th charge and discharge cycles. This result indicates that the depth of HAXPES (hν = 8 keV) is larger than thickness of SEI, thus HAXPES detected whole SEI and a part of the active materials exists underneath SEI film in the depth direction. After 50th cycles, the peak intensity of P1 decreased and the increase with remarkable peak intensity of P5 was observed without LiBOB additive. This indicates that thickness of inorganic SEI on graphite anode without LiBOB additive is larger than that of SEI with LiBOB additive. The similar tends were observed for LiF and POx components on graphite (the F 1s and P 1sXPS spectra were not shown).

More detailed mechanism will be discussed at the Meeting combined with NMR data. 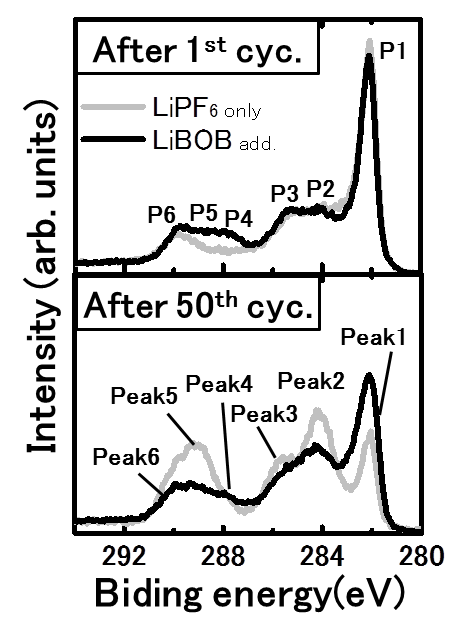