Remington A (Hyatt Regency)
Y. Huang, Y. C. Lin (NECCES at Univeristy of California, San Diego), Y. Chung (NECCES at Binghamton University), N. Chernova (NECCES at Binghamton University), F. Omenya (State University of New York at Binghamton), S. P. Ong (NECCES at University of California, San Diego), and M. S. Whittingham (NECCES at Binghamton University)
Lithium ion batteries are widely used in portable electronic devices and electric vehicles. However, safety is one of the most important issues for the Li-ion batteries’ use. Some cathode materials, such as LiCoO2, are thermally unstable in the charged state. Upon decomposition these cathode materials release O2, which could react with organic electrolyte, leading to a thermal runaway. Thus, the safety of the Li-ion battery depends on the interaction between the cathode materials and the organic electrolyte. In this work, we have investigated three types of cathode materials: layered oxide LiNi0.8Co0.15Al0.05O2 (NCA); olivine phosphates LiFePO4, Mn-rich LiFe1-yMnyPO4 (LMFP); and multielectron vanadyl phosphates VOPO4, LiVOPO4 and Li2VOPO4. The thermal behavior of the materials with and without electrolyte (1M LiPF6 in EC: DMC=1:1) was studied by differential scanning calorimetry (DSC) and thermogravimetric analysis coupled with mass spectroscopy (TGA-MS). The solid products of the thermal reactions were further studied by x-ray diffraction. The results indicate that electrolyte decomposes between 250 ºC and 300 ºC, releasing 391 J/g heat (Fig.1 a). NCA (charged to 4.6 V) starts to decompose at 220 ºC, generating large amounts of O2 and 674 J/g heat without the electrolyte. When NCA is heated with the electrolyte, the heat released is close to 800 J/g (Fig.1 b), which could result in a thermal runaway of the battery. LMFP charged to 4.4 V (MFP) partially decomposes below 350 ºC and gives off 476 J/g heat in the presence of the electrolyte (Fig.1 c). On the other hand, VOPO4 and its lithiated compounds (LiVOPO4, Li2VOPO4) have the best thermal stability: the heat generated by any of them without electrolyte is less than 100 J/g when heated up to 350 ºC. In the presence of the electrolyte, the heat released is also significantly less than that of NCA and MFP (Fig.1 d). We will also present evidence from the first principles phase diagrams that support the experimental conclusions, including predicted O2 evolution temperatures and resulting phase equilibria. This work was supported as part of the NorthEast Center for Chemical Energy Storage (NECCES), an Energy Frontier Research Center funded by the U.S. Department of Energy, Office of Science, Basic Energy Sciences under Award # DE-SC0012583. 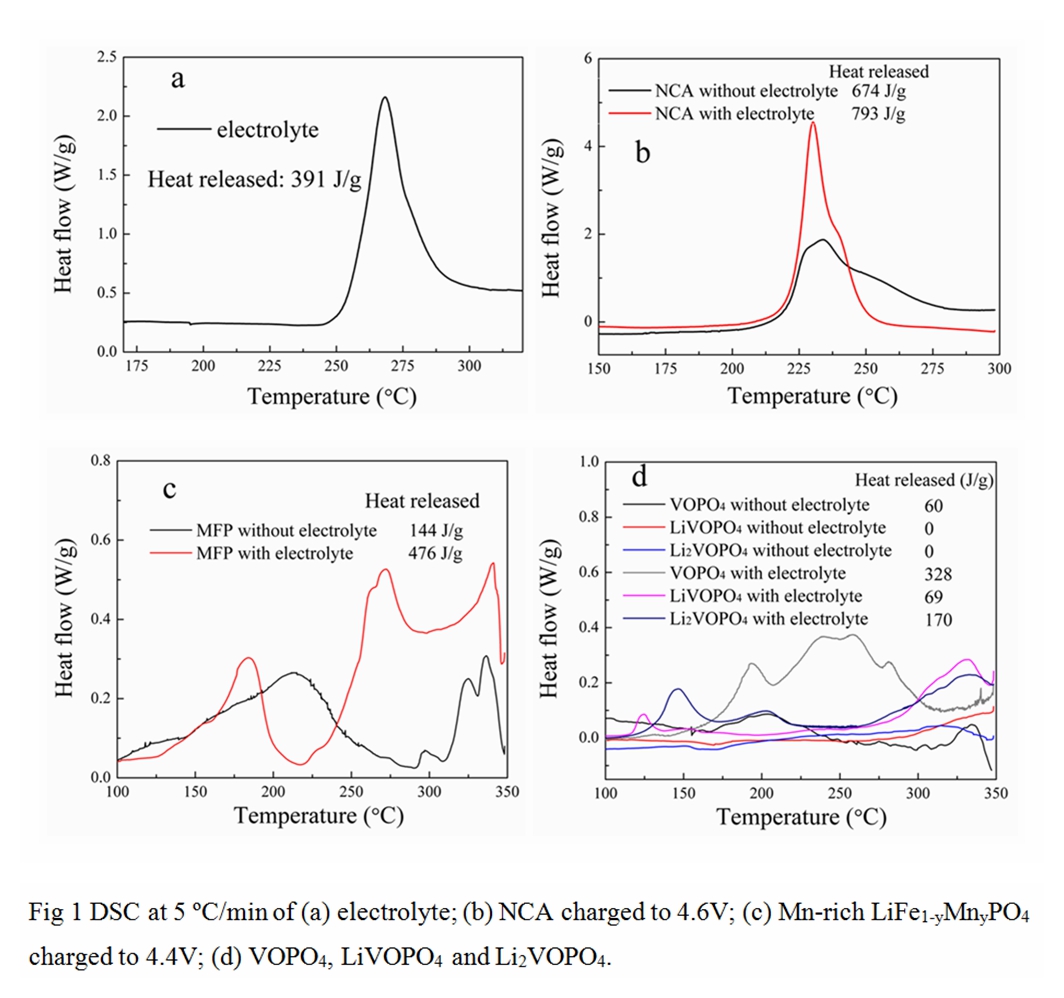