West Hall 1 (Phoenix Convention Center)
Y. H. Hwang, S. Ahn, C. Dong, W. Zhu, B. J. Kim, F. Ren, A. G. Lind, K. S. Jones (University of Florida), S. J. Pearton (University of Florida), and I. Kravchenko (Oak Ridge National Laboratory)
AlGaN/GaN high electron mobility transistors (HEMTs) have gained more attention recently because of the superior mobility (~1400 cm2/V-s) and high breakdown voltage. The quality of Ohmic contacts are key characteristics to guarantee the high mobility. During fabrication, Ohmic metals would be exposed to chemicals such as Buffer Oxide Etchant (BOE). BOE is a mixture of HF and NH4F, which is known to be reactive to metals. As a result, it is necessary to understand the effect of BOE treatment on Ohmic metals.

Table I shows the elemental change after BOE treatment analyzed by EDX. As shown in TABLE 1, Au decreased by 7% although it supposes to be not reactive to BOE. The content of Ti decreased by 0.1% and the contents for the rest of elements, Al, Ni and N, increased by 0.2, 1.3 and 0.6%, respectively.  For EDX, the X-rays are generated in a region about 2 microns in depth of the sample. The thickness of the Ti/Al/Ni/Au Ohmic metallization was around 0.3 µm, and thus the EDX signals of Ga and N should be dominated by the bulk GaN even with some Ga or N out-diffusing through the alloyed Ohmic metallization.  Thus, it is reasonable to assume that the Ga and N contents did not change significantly.  The percent increases of Ga and N content after BOE treatment were due to the decrease of the Au content.  By comparing the increases of percent content of Al, it was less than the percent increase of Ga or N.  Therefore, besides Ti and Au, the content of Al also decreased after BOE treatment.  However the increase of Ti/Al/Ni/Au Ohmic metallization contact resistance should be mainly caused by the decrease of Au content in the BOE treated sample.  Although Au is inert to BOE, Au could be removed by the etching of Al underneath this layer.

SEM is also used to observe the surface morphology change after BOE treatment. The Ohmic contacts can be further divided into three different regions, island, ring, and field area. Each island is around 3-5 µm and surrounded by a 1 µm-width Au ring. After BOE treatment, the width became thinner and the island became shorter. With the EDX analysis, Au/Al was found to mainly be distributed in ring area and Ni/Al in the island. Because Al is reactive to BOE, it might be etched and thus peeled off Au in the ring area. The etching of Au might be the reason of thinner width and the increase of contact resistance.

In summary, the degradation of Ohmic metallization exposed in BOE was studied. The contact resistance of Ohmic metallization increased significantly after treatment in BOE for 2 minutes. Moreover, after annealing, there were island-like structures surrounded by Au-Al alloy rings and a field area between the islands. The BOE etching occurred mainly at the island and ring areas instead of the field area between the islands. The increase of sheet resistance was due to the etching of surface Al and Ti and the loss of Au in the island and ring areas. 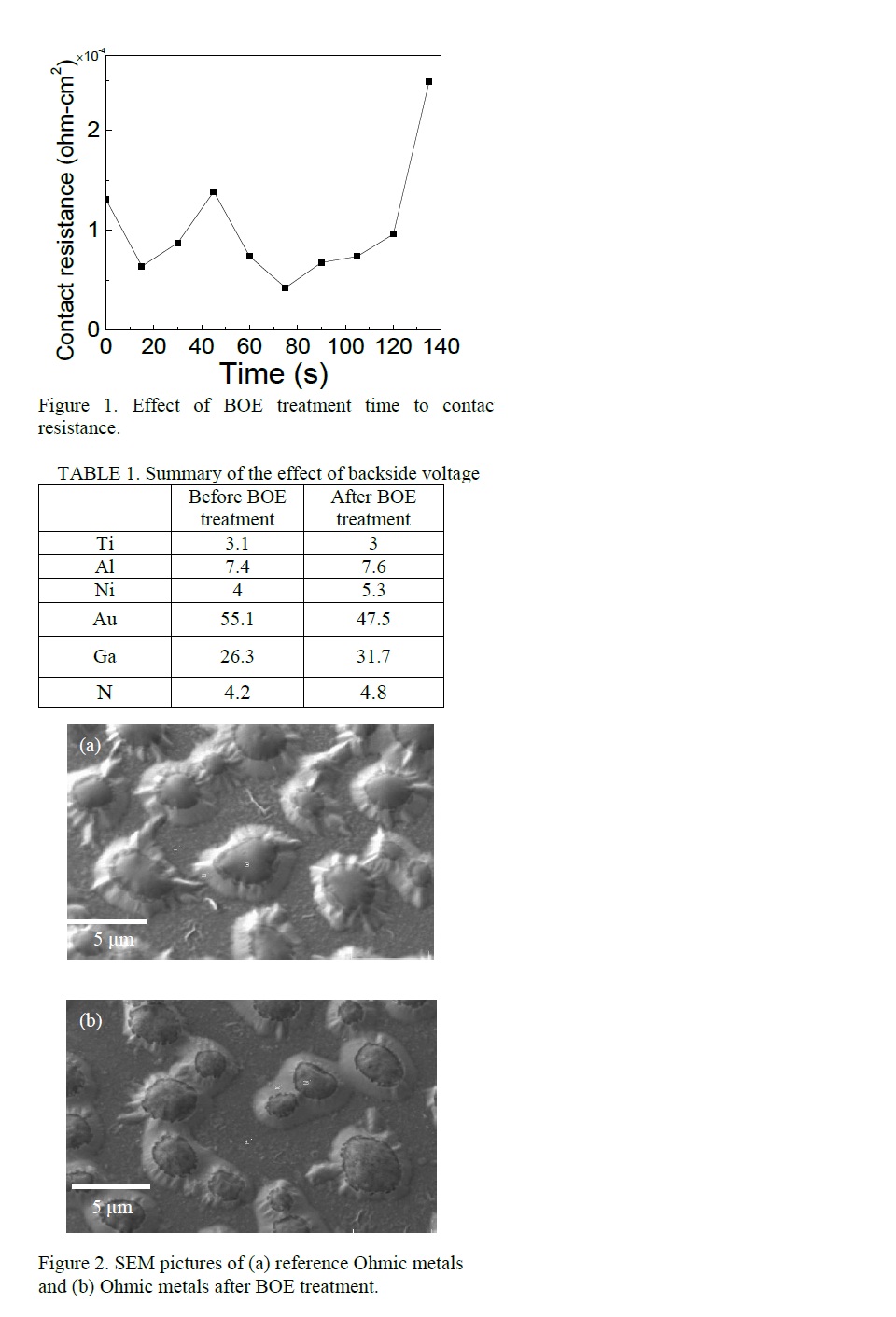