106-C (Phoenix Convention Center)
R. E. Soltis, D. Makled, M. McQuillen (Ford Motor Company), and G. Surnilla (Ford Motor Company)
Zirconia-based electrochemical sensors for measuring the oxygen concentration in the automotive exhaust have been used on vehicles for many years. The oxygen sensor is an electrochemical cell based on oxygen-ion conducting zirconia. The sensor consists of a single electrochemical cell which has one electrode exposed to a reference (air) atmosphere and the other electrode exposed to the measurement (exhaust) gas. This sensor operates as a simple Nernst cell. The open circuit voltage of this zirconia electrochemical cell changes with variations in the oxygen partial pressures (pO2) existing adjacent to its two electrodes. Since the reference electrode is maintained at a constant pO2 (air), the emf generated by this Nernst cell gives a measurement of the concentration of oxygen in the exhaust gas. All gasoline (and some diesel) vehicles currently utilize an oxygen sensor to control their emission systems.

Although successfully used for stoichiometric air-to-fuel (A/F) control for many years, these Nernst-type oxygen sensors are not useful for applications away from stoichiometry because of their low sensitivity. The Nernst cell has a logarithmic dependence of the emf on oxygen partial pressure.  More recently, double zirconia-cell sensors have been developed which have much higher sensitivity and therefore a wider range of operation. These “wide-range oxygen” or “universal exhaust gas oxygen” (UEGO) sensors are applicable to A/F measurement and control from very rich to very lean A/F mixtures. These double-cell sensors are based on oxygen pumping, which involves the transfer of oxygen from one side of a zirconia cell to the other by passing an electric current through the device. Most new vehicles, as well as an increasing number of diesel powertrains, employ UEGO sensors to meet the ever-stricter emission requirements mandated by law.

A novel method has been developed to use this double-cell oxygen-pumping device (UEGO sensor) to measu­re the concentration of other oxygen containing molecules in the exhaust gas, e.g. H2O, CO2, SO2, and NOx. In order to mea­sure these oxygen containing species, a voltage that is greater than the dissociation potential for a particular measurement species is applied across the cell. The dissociated species contributes oxygen that can now be measured by the sensor. The output of the cell provides a measure of the oxygen generated from the decomposition of the measurement gas, and thus a measure of its concentration.

In the exhaust gas this measurement is complicated by the fact that oxygen, along with other oxygen-containing molecules, is also present. If the relative amounts of these other molecules were constant, then the concentration of the measurement species could still be determined unambiguously by subtracting the contribution of these other molecules. However, the amounts of the different oxygen-containing molecules in the exhaust gas may vary with engine operating conditions. This uncertainty can be resolved by applying differing dissociation potentials across the cell. The output of the sensor at each potential then provides a measurement of the amount of oxygen containing species with dissociation potential less than the applied potential. Subtracting the signals can discriminate between the various constituents.

For example in a mixture of air and water, the oxygen concentration alone can be determined by measuring the output of the sensor with a low potential applied. Then the measurement of the concentration of oxygen plus water can be measured by subsequently applying a voltage larger than the dissociation potential of water. The water concentration can be determined by subtracting the signal due to oxygen from the signal due to the combination of the gases. In principle, these measurements can be achieved without any modification to the existing sensor hardware. A simple modification to the electronic control circuitry is all that is required to perform this type of measurement.

Figure 1 shows the sensitivity of a commercially available UEGO sensor for the dissociation of H2O as a function of dissociation potential. A typical operating value for the sensing voltage (Vs) for oxygen measurement is 450 mV. The plot below was generated from data measured in the lab at various water concentrations in a carrier gas of dry air. From the plot it is evident that water dissociation is occurring at potentials greater than 800 mV. Additionally, the output begins to saturate at a potential approaching 1100 mV, suggesting that full dissociation of the water has been achieved. 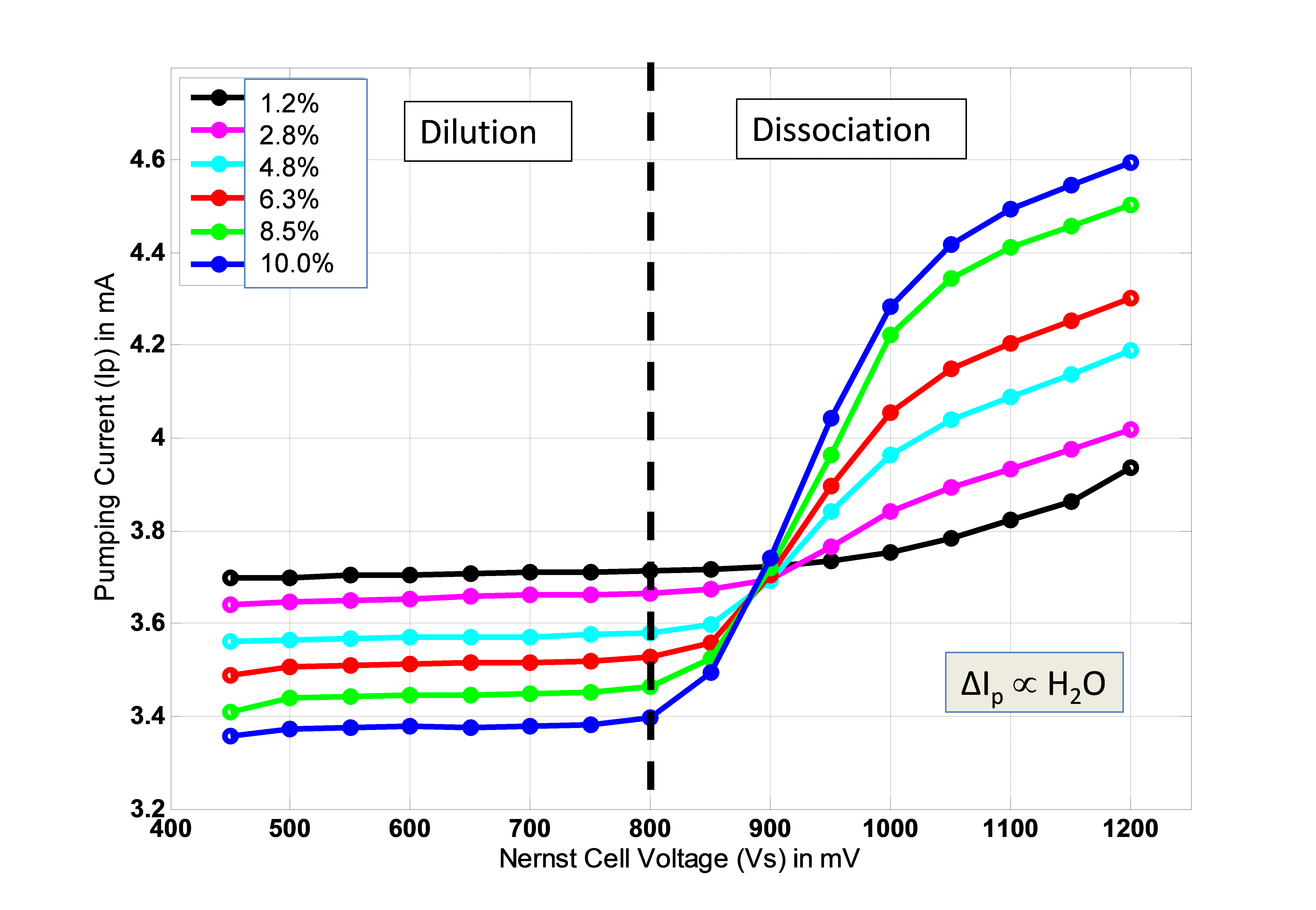