213-B (Phoenix Convention Center)
B. Kim (University of Illinois at Urbana-Champaign), F. Hillman (University of Illinois at Urban-Champaign), S. Fujikawa (WPI-I2CNER, Kyushu University), and P. J. A. Kenis (University of Illinois at Urbana-Champaign)
Over the past several decades the atmospheric CO2 levels have risen to levels that are now being associated with climate change, as well as the abnormal weather patterns (1) .  To curb this rise and ultimately lower the atmospheric CO2 levels, multiple strategies are being considered, including carbon capture and sequestration, improvement of fuel efficiency of cars, the energy efficiency of buildings, and the increased utilization of renewable energy resources (2).  Electrochemical reduction of CO2 into value-added products such as carbon monoxide (CO), formic acid, ethylene and ethanol may provide an additional option to not only reduce CO2 emissions but also to utilize excess, otherwise wasted energy from intermittent renewable sources.  Furthermore, utilization of CO2 as a feedstock for chemical production may reduce global dependency on fossil fuels.

Significant work is ongoing to improve the catalysts needed for electroreduction of CO2 to different products.  With better catalysts becoming available mass transport limitations to and from the electrode surface need to be overcome for electroreduction of CO2 to become economically viable.  Several factors, including elevated pressure, electrode modification and the use of non-aqueous electrolytes, have been studied to improve mass transport (3).  Gas diffusion electrodes (GDEs) are utilized for a range of applications including fuel cells and electrolysis cells (4,5).  A GDE consists of a carbon fiber substrate (CFS), a microporous layer (MPL), and a catalyst layer (CL).  MPLs, typically composed of carbon powder and poly-tetrafluoroethylene (PTFE), can reduce the contact resistance between the CL and the CFS by forming a flat and strong interfacial layer, while at the same time forming a barrier for liquid water.

In prior work, we developed a fully-automated air-brush-based catalyst layer deposition method to achieve a uniform catalyst layer, leading to increased current density and improved product selectivity in CO2 reduction (4).  However, the effect of CFS and MPL composition in a GDE on CO2 reduction has not been studied extensively.  To improve the CO2 electroreduction performance, we explored the effect of MPL and CFS composition on product selectivity and partial current density for the electroreduction of CO2 to CO.  We varied PTFE amounts in the MPL from 5 to 50 wt.%, and characterized these electrodes in an electrolyzer with a flowing electrolyte.  A 20 wt.% PTFE loading in the MPL exhibited the highest Faradaic efficiency and partial current density for CO.

We also varied the thickness of the CFS while using an optimized MPL (20 wt.% PTFE) and tested these electrodes with two different feeds (100% CO2 and 50% CO2/50% N2 by volume).  Better performance was observed with the thinner CFS (60-10%) than the thicker CFS (90-10% and 120-10%) while using the diluted CO2 feeds (Figure 1).  The thinner CFS may have a higher gas permeability resulting in a higher maximum current density.  Note that no significant difference in performance was observed performing the same CFS thickness study with a 100% CO2 feed.

In summary, this paper will report on GDEs that have been optimized for the electroreduction of CO2, specifically leading to higher current densities and improved product selectivities, by varying the composition and thickness of some of its layers. 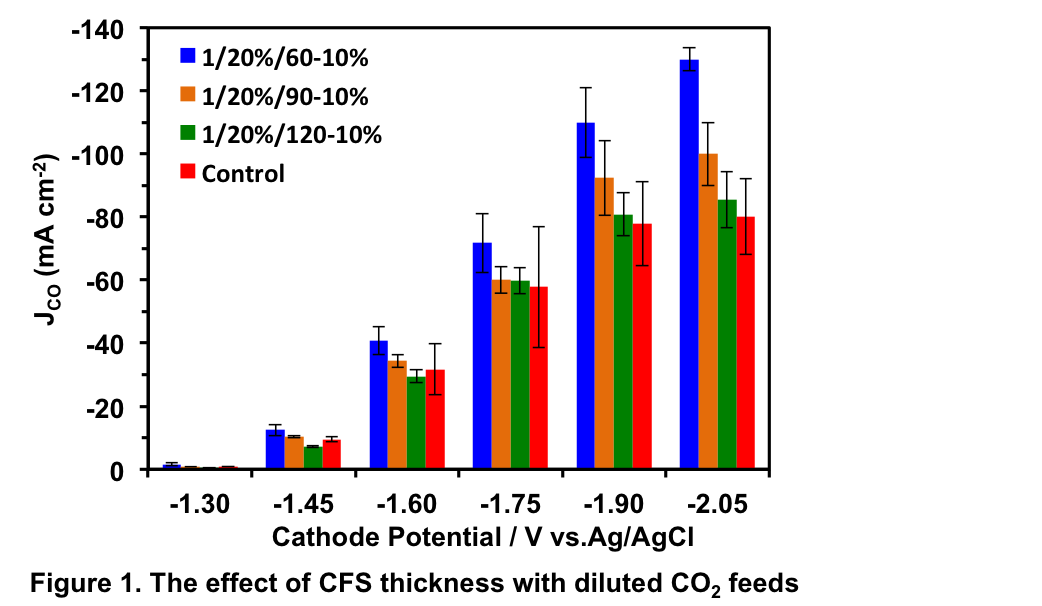