Borein B (Hyatt Regency)
S. Babanova (J. Craig Venter Institute), I. Matanovic, M. S. Chavez (University of New Mexico), and P. Atanassov (University of New Mexico)
Various approaches have been developed in the last 5 years regarding targeted enzyme orientation on the electrode surface but no explanation of enzyme orientation on electron transfer properties have been provided. The same can be said about the utilization of mediators for enhancement of the interfacial electron transfer. Facing this fundamental challenge we started using computational approaches along with experimental efforts to gain knowledge of the underlying processes.

In our computational and experimental benchmark studies soluble PQQ-dependent glucose dehydrogenase (PQQ-sGDH) have been explored since this enzyme is known as capable of direct electron transfer (DET). Various techniques for PQQ-sGDH immobilization and/or enhanced electron transfer have been developed over the years and a key question regarding the “proper” orientation of PQQ-sGDH has been raised. Should the substrate-binding pocket and thus PQQ be placed facing the electrode surface or it should be fully exposed to the electrolyte?

To resolve this question and to enhance the electron transfer at the enzyme-electrode interface, quinones were explored in solution and immobilized on carbon support material. In both cases the current densities generated form the glucose oxidation through PQQ-sGDH were increased from 1.5 to 5 times depending on the properties of the explored quinones. In addition to the electrochemical characterization of the designed enzymatic anodes, molecular computational calculations, such as Density Functional Theory (DFT) and Molecular Docking Simulations, were used to gain insight into interactions between the quinones and PQQ-sGDH from one hand and the quinones and the support material, from another (Fig. 1). The role of the two types of benzoquinones, 1,2- and 1,4-benzoquinone, and ubiquinone in the operation and mechanism of the electron transfer in PQQ-sGDH anodes has been addressed1.

It was established that the higher electrochemical performance of PQQ-sGDH anodes in the presence of free 1,2- and 1,4-benzoquinones is due to the smaller distance between these molecules and the enzyme cofactor (PQQ). It was proposed that when 1,4-benzoquinone is adsorbed, it plays the role of a mediator as a result of its high electron transfer rate ability and smaller PQQ-quinone distance. At the same time when 1,2-benzoquinone is adsorbed on the electrode surface, the enzyme will transfer the electrons directly to the support and the modifier will mostly play the role of an orienting agent. Similar conclusion can be made for the PQQ-sGDH anode modified with physically adsorbed ubiquinone for which purely orientation role was proposed. 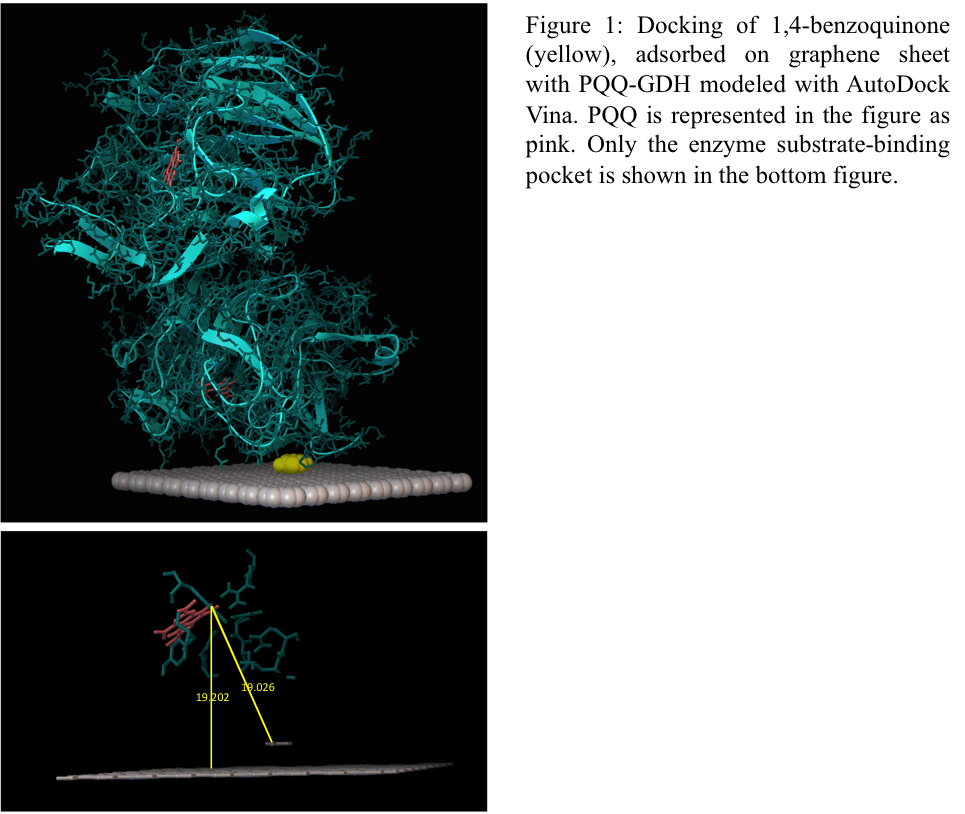