Silicon (Si) is used at various places in our life including a solar cell and an integrated circuit. The demand for Si increases year by year. The raw materials in the Si production are silica which exists in the earth crust, and Clarke number of Si is the second major after oxygen. However, production volume of Si is not much more than iron or aluminum. Generally, the metallic Si is produced by carbothermal reduction of silica, the purity of the Si is about 97 ~ 99 %, and the produced Si is used as alloying element. High purity Si is used for the photovoltaic and semiconductor industry. The production process of the high purity Si is chemical vapor deposition, but the production cost is relatively high. In this study, we propose the electrochemical process using ionic liquids for Si production, because electrolysis process can be achieved lower cost production. The electrodeposition of Si in TMHATFSI ionic liquids was reported by Nishimura et al.1) In the ionic liquids, 1-methyl-1-propylpyrrolidinium bis (trifluoromethanesulfonyl) imide（P13TFSI）has high conductivity in TFSI ionic liquids.

In this paper, we investigated the electrochemical behavior of Si ions and electrodeposition of Si by constant potential electrolysis in P13TFSI ionic liquids.

The electrolyte for Si electrodeposition was P13TFSI ionic liquid containing 0.9 M SiCl4. The electrochemical cell was used three-electrode type cell as shown in Fig. 1. For cyclic voltammetry (CV), a glassy carbon plate (G.C.) was used as working and counter electrode, Pt rod (2 mm in diameter) was used as a quasi reference electrode(Q.R.E.). For constant potential electrolysis, a Cu plate was used as a working electrode. All electrochemical measurement was performed in the glove box filled with Ar at 323 K. The composition analysis, observation of surface morphology and identification for the electrodeposits formed by constant potential electrolysis were carried out by X-ray fluorescence spectrometer (XRF), scanning electron microscope (SEM), and X-ray diffraction (XRD) instrument, respectively.

The constant potential electrolysis was carried out at potential of -3.4 V with electric charge of -3.2 Ccm-2 (theoretical film thickness: 1 μm). The purity of Si in electrodeposits were 90~97 at% by XRF analysis. In the SEM observation, a lot of cracks were found in most observed part. The XRD pattern of electrodeposit was shown in Fig. 3. From the figure, it was seen that the diffraction pattern of the electrodeposit corresponds with that of metallic Si of good crystalline. 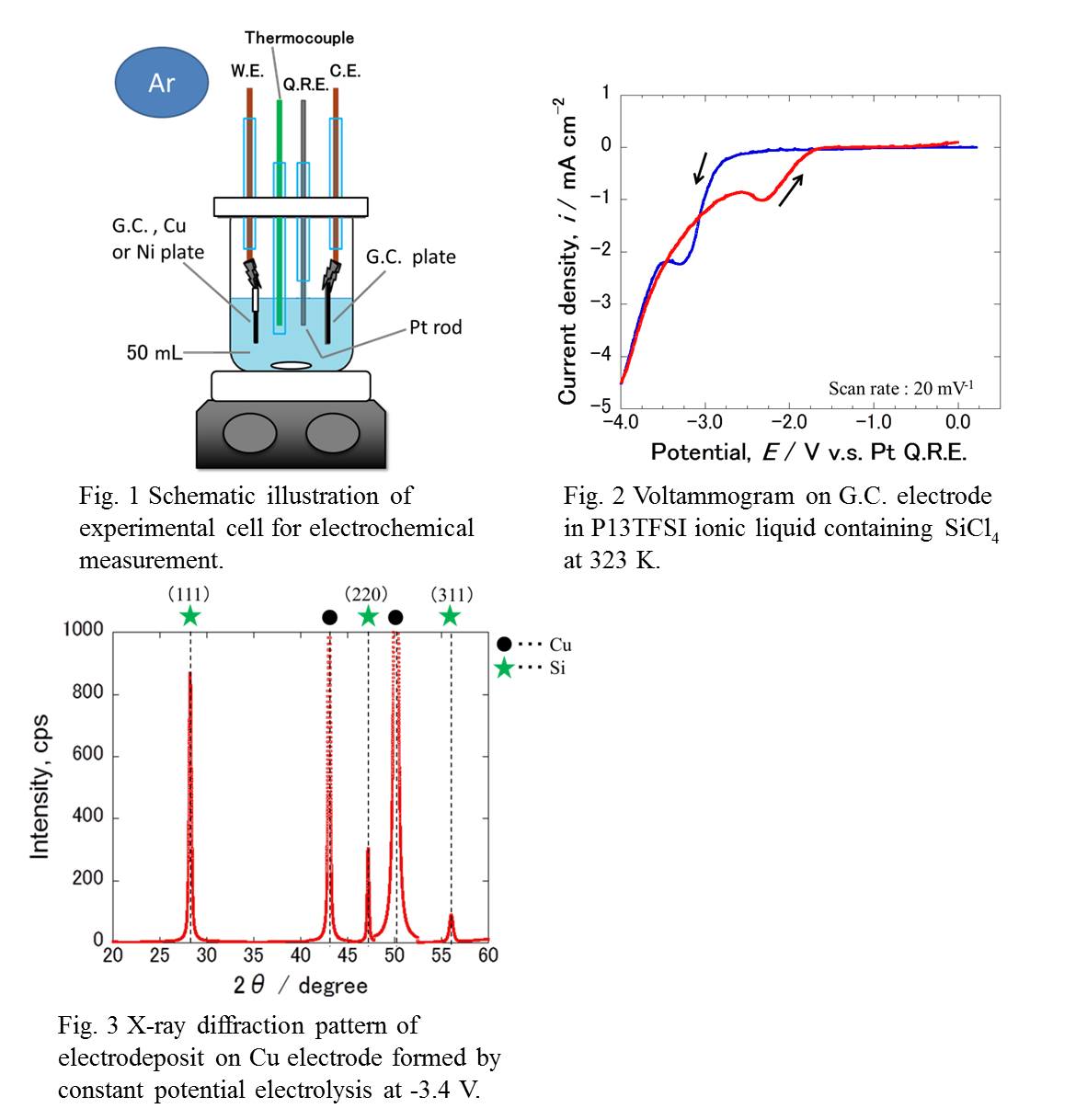