102-A (Phoenix Convention Center)
M. L. C. Lim, D. W. Ellis, S. C. Hahn, J. R. Scully (University of Virginia), and R. G. Kelly (University of Virginia)
Applied potential has been found to influence localized corrosion morphology in a wide range of aluminum alloys.[1-4] The concept of a potential window for intergranular corrosion (IGC) is often utilized to define the zone of IGC in IGC-susceptible materials.[2-5]  In general, the IGC zone is usually the potential range between the breakdown potentials of the more anodic intermetallic phase and that of the matrix phase.  In the case of Al-Mg alloys (AA5XXX), particularly AA5083, it was established that the range of potentials between the breakdown potentials of a sensitized AA5083 alloy and that of the more anodic β-phase precipitate (Al3Mg2) describes the potential window for IGC spreading.[5]

Limited studies involving IGC propagation into the depth from the surface for sensitized Al-Mg alloys also demonstrated potential dependence.  Mizuno and Kelly[6] have shown that the maximum IGC damage depth in sensitized AA5083-H131 after 100 hours of galvanic coupling with 4340 stainless steel is linearly related to the galvanic couple potential.  The same trend of linearly increasing IGC damage depths with measured applied potentials were observed in a 100-h galvanostatic tests conducted by Lim, et al.[7] on sensitized AA5083-H131.  Both studies showed that this linear potential dependence changed with increasing degrees of sensitization (DoS).  Additionally, there exists a threshold potential, the minimum potential at which IGC occurred, which decreased with increasing DoS, within the narrow range of -0.85 to -0.80 VSCE.  This threshold potential is more negative than the IGC spreading potential for AA5083,[5] but more positive than the β-phase breakdown potential,[8] suggesting an IGC propagation zone within the suggested IGC spreading potential window.

The aforementioned studies were limited to AA5083-H131; other alloy composition, strain-hardening tempers, as well as plate gauge thickness were not explored.  The influence of these factors on the potential dependence and IGC propagation kinetics are particularly important as preliminary research (Figure 1) revealed that metallurgical and physical factors influence DoS, and possibly subsequent IGC behavior, when exposed to the same sensitization heat treatment.  In is then the aim of this study to investigate the effects of alloy Mg content and plate gauge thickness on the potential dependence, specifically the threshold potential, of IGC in these sensitized Al-Mg alloys.

The results of this study provide insights into the critical gaps regarding alloy, temper, and gauge thickness effects on the IGC propagation behavior of sensitized Al-Mg alloys applied in marine environments. 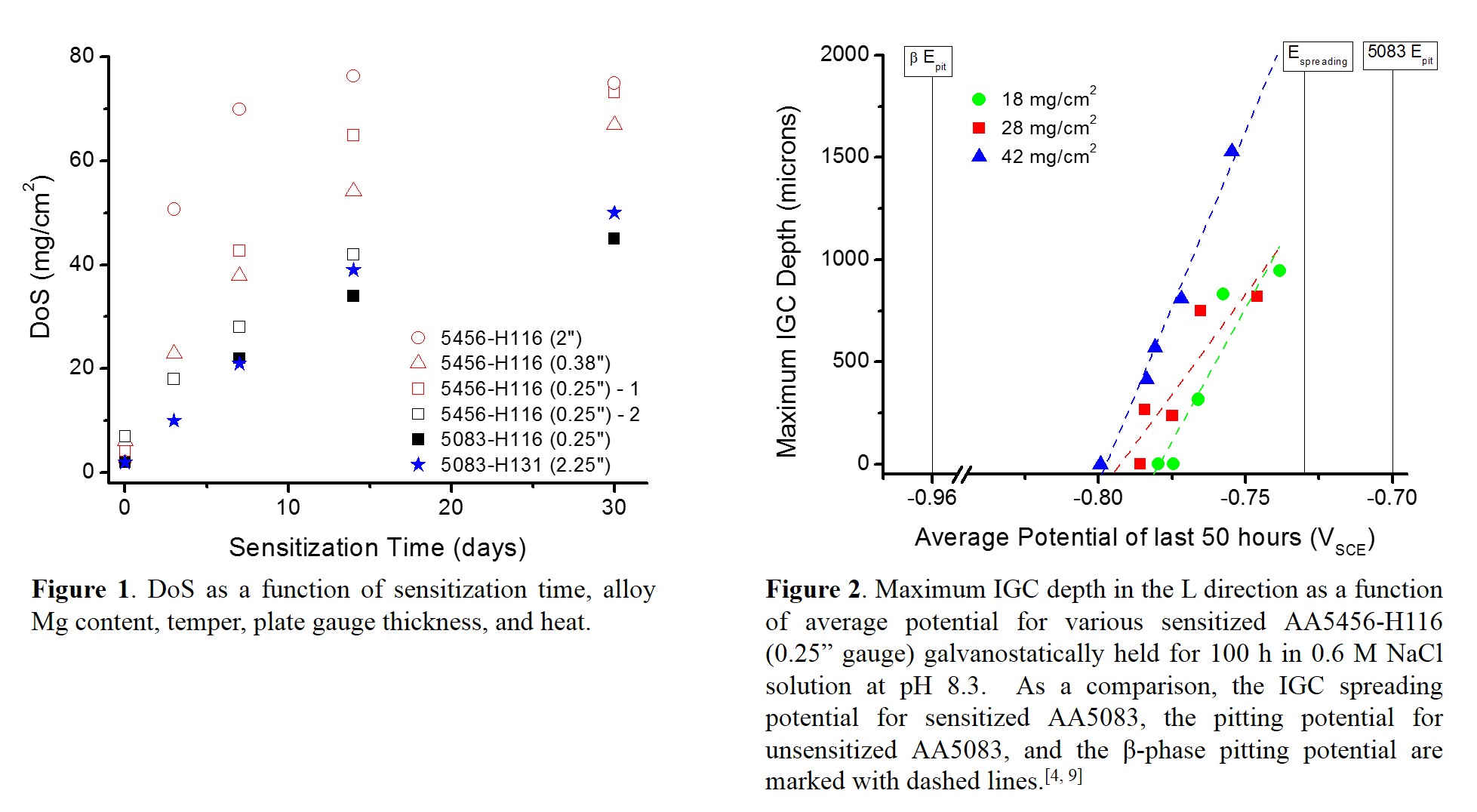