Core-shell transition metal carbonate precursors were made using coprecipitation in a continuously stirred tank reactor (CSTR). Appropriate temperature and pH conditions were established for the core and shell precipitations. The core was precipitated first and then shell was precipitated subsequently on the surface of the core. Then appropriate amounts of Li2CO3were mixed with the core-shell precursors and fired at high temperature to yield the final product.

The compositions of the materials selected for the core or shell were: A - Ni0.166Mn0.5Co0.333CO3 and H - Ni0.4Mn0.5Co0.1CO3. Two core-shell precursors (CS-AH and CS-HA) with 80:20 core to shell ratio were synthesized using A and H.  In CS-AH, precursor A is the core and H is the shell whereas in CS-HA the core and shell compositions were interchanged.  Figures 1a and 1c show SEM images of CS-AH and CS-HA respectively and Figures 1b and 1d show cross-sectional EDS elemental maps. In Figures 1b and 1d, the bluish-red and bluish-green regions indicate the Co-rich and Ni-rich phases.

LiMO2type materials were synthesized from A, H, CS-AH and CS-HA precursors and they were labelled as A2, H1, CS-A2H1 and CS-H1A2. Figure 2 shows the first cycle charge-discharge profiles of the samples in coin type cells. Sample A2, which was synthesized by following reference 2, exhibits a relatively low IRC (9.25%) compared to sample H1 (20.6%). For sample CS-A2H1, which has 80% A2 core and 20% H1 shell, the IRC was 10.8%.  This IRC value is approximately the linear combination of the individual IRCs obtained from A2 and H1. Similarly, sample CS-H1A2, that has 80% H1 core and 20% A2 shell exhibits an IRC of 17.7%. 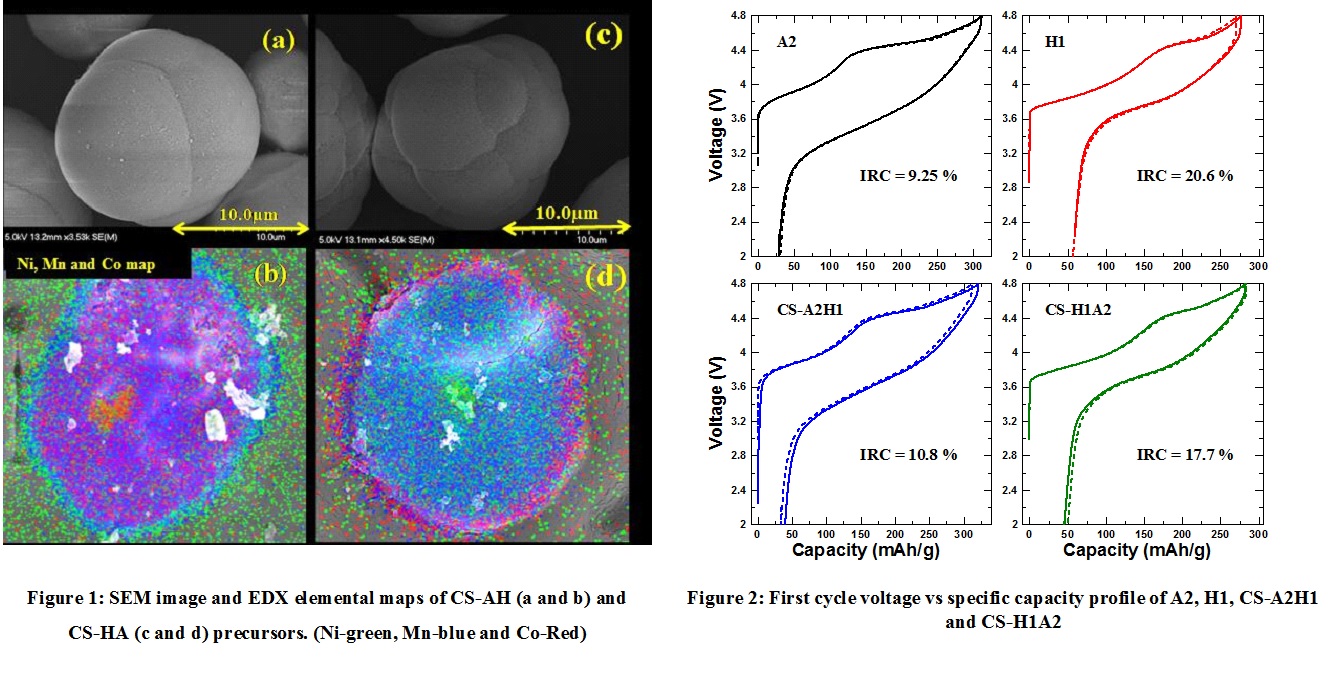