106-B (Phoenix Convention Center)
L. Torres-Castro (University of Puerto Rico-Rio Piedras), R. S. Katiyar (University of Puerto Rico-Rio Piedras), and A. Manivannan (U.S. Department of Energy, Mechanical and Aerospace Engg. West Virginia University)
Commercial realization of rechargeable Li-ion batteries has revolutionized portable electronic industry, especially microelectronics in recent years. However, issues such as safety, high temperature performance, cost, and environmental concerns need to be addressed, especially for high power applications. Among the cathode materials investigated, lithium manganese oxides have been exploited due to the abundance of Mn in earth, low toxicity and safety. In this family of oxides, Li2MnO3 possess monoclinic structure having c2/m space group symmetry with a layered arrangement of Li[Li1/3Mn2/3]O2, thus resembling the ideal layered structure of LiCoO2. Li2MnO3 is known to be electrochemically inactive due to the presence of Mn in tetravalent oxidation state. Substitutions of ions in the structure allow the reduction of the valance state of manganese, electrochemically activating the material. In the present study, we investigated the electrochemical and structural properties of Li2MnO3at room temperature by partially substituting Mn site with rhodium via the solid state synthesis method.

Li2MnO3, Li2RhO3 and Li2Mn0.5Rh0.5O3 compositions were prepared by a solid state synthesis method. For the individual compounds the synthesis was carried out using lithium carbonate [Li2CO3], manganese oxide [MnO2] and rhodium chloride [RhCl3] as precursor materials. Stoichiometric ratios of the metals corresponding to each composition were measured and carefully ground using a pestle and mortar for 1 hour. The resulting mixture was calcined in air at a ramp rate of 100oC h-1 to a final temperature of 600oC for Li2CO3/MnO2, 850oC for Li2CO3/RhCl3 and 900oC for Li2CO3/MnO2/RhCl3. The final heat treated powder samples were mixed with polyvinylidenefloride (PVDF) and carbon black in the wt % ratio of 80:10:10, respectively. A slurry paste was prepared using 1-methyl 2-pyrolidone as solvent and was coated on Al foil substrates to form a homogeneous layer. Electrodes were punched out for the fabrication of 2032 coin cells. Metallic Li was used as the counter electrode along with 1.2M LiPF6in EC:DMC (1:1) as electrolyte. The charge and discharge analysis was performed at 10mAh/g within a potential window of 2.0V- 4.8V.

The structural phase formation of the materials and presence of any crystalline impurities in the compounds were studied with X-ray diffraction (XRD). Figure 1 shows XRD spectra for Li2MnO3 600o C -8h, Li2Mn0.5Rh0.5O3 900o C -24h and Li2RhO3 850o C-24h. X-ray photoelectron spectroscopy (XPS) was obtained to study the valance state of the manganese ion after rhodium substitution. Figure 2 shows XPS pattern for Mn 2p of pristine and partially Rh-substituted samples. The Mn 2p1/2 and Mn 2p3/2 peaks for Li2MnO3 are 654.25eV and 642.50eV, respectively, being in agreement with those reported in literature [3]. A slightly shift to a lower binding energy is observed for Li2Mn0.5Rh0.5O3, indicating a decrease in the tetravalent state of manganese. Therefore, an improvement in electrochemical performance is expected.

Preliminary results shown in Figure 3 indicate that partial Rh-substitution enhances the cycleability of Li2MnO3 and increases the capacity by 64mAh/g. Electrochemical performance of Li2MnO3, Li2RhO3 and Li2Mn0.5Rh0.5O3 cathodes will be presented in detail. 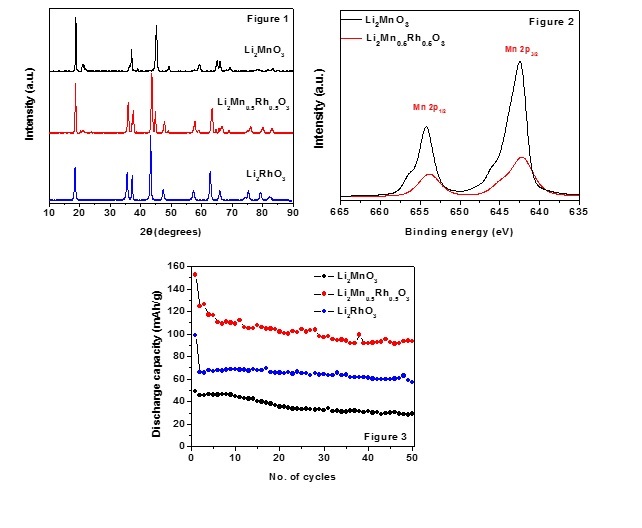