West Hall 1 (Phoenix Convention Center)
N. Munemura (Department of Materials Science,Tohoku University), I. Muto, Y. Sugawara (Department of Materials Science, Tohoku University), and N. Hara (Department of Materials Science, Tohoku University)
Li metal has attracted attention as a material of negative electrodes for rechargeable batteries, but has the problem of reversibility due to Li dendrite formation during charge-discharge cycles. The suppression of Li dendrite formation is essential for developing Li metal rechargeable batteries. The morphology of electrodeposited Li and the growth of Li dendrite have been studied extensively; however, the relationship between the growth of Li dendrite and the change of electrochemical signal is still unclear. To clarify this relationship, it is necessary to conduct in situ optical microscopic observation.

To investigate the effect of current density on Li deposition morphology, potentiodynamic and galvanostatic polarization measurements were conducted. Pt and Ni substrates were mechanically polished with SiC paper through 1500 grit, and then polished down to 1 µm using diamond paste. The counter electrode was a Pt wire. The reference electrode was Li. 1 M LiPF6 EC:DMC(1:1 vol%) was used as the electrolyte. The electrode surface area was around 95mm2. The current density for the galvanostatic experiment was varied from 0.1 to 2.0 mA/cm2, and the electrochemical deposition of Li was performed at constant charge (3.6 C/cm2). Surface observations were conducted by an optical microscope and a laser microscope. All electrochemical measurements were carried out in a glove box filled with argon.

Figure 1 shows the cathodic polarization curves of Pt and Ni substrate. The increases in cathodic current densities were observed at around 0 V(vs.Li/Li+), indicating that the electrodeposition of Li proceeded at the potential range less than 0 V. Figure 2 shows the laser microscope images of the electrode surfaces after the galvanostatic polarization measurements. The surface of Li deposited on Ni was smooth compared with that on Pt. In particular, non-uniform deposition was observed at 0.1 and 2.0 mA/cm2 on the Pt substrate. In the case of the Ni substrate, a more uniform deposition was observed at lower current density. 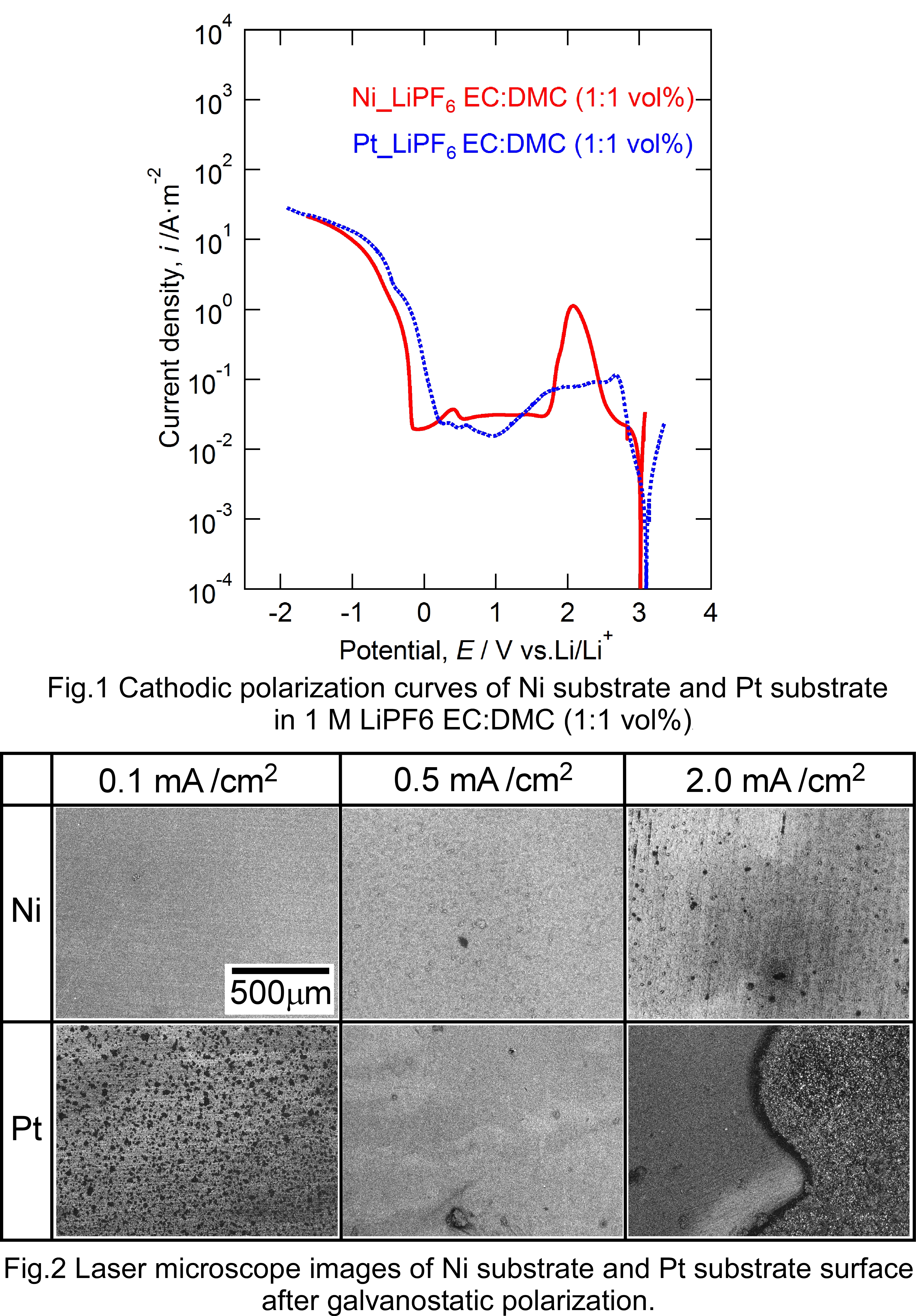