17
Towards the 3D Thin-Film Li-Ion Battery: A Novel Solution-Based Process for the Deposition of (Multi-)Metal Oxide Coatings on High Aspect Ratio Features

106-B (Phoenix Convention Center)
S. Gielis (Hasselt University, imomec, imec), N. Peys (Hasselt University, imomec, imec), S. Moitzheim (imec, KU Leuven), P. M. Vereecken (imec, KU Leuven), A. Hardy (Hasselt University, imomec, imec), and M. K. Van Bael (Hasselt University, imomec, imec)
Many types of rechargeable batteries are on the market of which lithium ion chemistries capture the main part of the portable electronics. Conventional Li-ion battery technology typically uses slurries (based on powders) for the active electrode component in combination with a liquid electrolyte. In order to overcome the relatively high risk of shorts and hence thermal runaway or explosions, due to the high inflammability of the electrolyte, membrane separators and a bulky casing are necessary. As an alternative, all-solid-state Li-ion batteries and in particular thin film based battery technology is being explored. It is obvious that the use of compact thin films as components in these commercially available devices has advantages regarding safety, especially when it comes to the electrolyte. Furthermore, they are characterized by a higher resistivity against (electro)chemical degradation, resulting in a longer cycle life. The typical lower conductivity of solid electrolytes, compared to liquid electrolytes, is compensated by the thinness of the films. However, planar thin film electrodes limit the maximum energy density of these devices. Therefore, 3D thin-film batteries, consisting of electrode and electrolyte thin films, coated on 3D structured surfaces, creating a large surface area and thus an higher energy density, are proposed. One can understand that for this new type of batteries, which are currently in an exploratory stage, there is a strong need for coating of various oxides (electrodes and electrolyte) on 3D surfaces.[1]

Conformal coverage of high surface area 3D substrates is typically done via atomic layer deposition (ALD). However, ALD suffers from high running and equipment costs, low throughput (especially for substrates with a strongly increased surface area) and a limited applicability towards complex, multi-metal oxides.[2] In view of commercial 3D battery applications and upscaling, there is a strong need to overcome these disadvantages.

We present a novel chemical solution deposition (CSD) process for the deposition of (multi-)metal oxide coatings on 3D substrates, i.e. silicon micropillars coated with 20 nm TiN.[3] The CSD method has been developed first for TiO2, a candidate anode material. As starting point, an aqueous citrate-peroxo Ti precursor, which had been successfully applied for the deposition of uniform, good quality TiO2on planar substrates via spin coating [4], was used. This precursor system was optimized, in particular by adding an additive, to allow coating on high aspect ratio features. The whole was spray coated at 180°C and by controlling all levels of the process, complete coverage of the silicon pillars with the Ti precursor was obtained. Since the deposition was performed at elevated temperature, the solution was instantly transformed into a gel, consisting of coordinated complexes in which Ti ions were immobilized. The deposited gel, which was already partly decomposed due to the elevated deposition temperature, is shown in the SEM images in Figure 1. Further heat treatment of the pillars lead to the complete combustion of the gel and thus to titanium oxide formation, it also triggered the crystallization of the deposited layer. A thorough crystallization study indicated that phase-pure TiO2 anatase films could be obtained by a well-defined post deposition anneal at 500°C. Lithium-ion insertion and extraction behavior was observed for the anatase film deposited on TiN-coated silicon pillars, indicating its application potential for 3D Li-ion batteries. 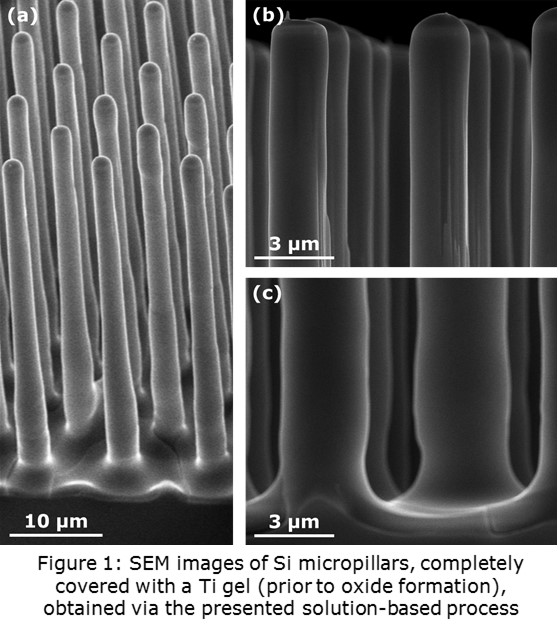