1242
A Laboratory Study of Partial Anode Effects during Aluminium Electrowinning

Aluminium is produced electrochemically by consuming alumina (dissolved in molten cryolite) and carbon. In addition to aluminium this also produces CO2 with a fraction of CO. The reversible potential for the reaction is about 1.2 V, but due to overpotentials related to the electrodes and IR drops in different parts of the cell, especially from the electrolyte, a regular industrial cell needs to operate at a much higher voltage (3.8 – 4.5 V). If the alumina concentration in the electrolyte gets too low the polarisation increases which opens the possibility for other anode reactions, like the production of the PFC gases CF4 and C2F6. The phenomenon is termed anode effect (AE) and traditionally when this occurred the voltage could raise to levels of 20 V or higher, and the current distribution over the anodes would become erratic.

The existence of PFCs not related to the traditional anode effect in industrial aluminium production cells has been documented for a wide range of technologies [1-4]. Industrial measurements have shown that PFC production can begin at one anode during normal cell potentials and propagate to the full cell given the right conditions [5]. To experience the phenomenon in the laboratory, a system with more than one anode was designed.

The setup consists of two separate chambers made out of a single cylindrical block of graphite, which acts as a shared cathode for the system. Each chamber has its own electrolyte solution, reference electrode and anode. A thermocouple is placed within each anode to get instant feedback on the heat production of the reactions occurring (Figure 1). The anodes are connected in parallel to a power supply unit that can operate under both constant current (CC) and constant voltage (CV). Individual anode currents are measured over a resistance connected in series with each parallel anode, and voltages are measured against the respective reference.

By varying factors such as alumina concentration it is possible to emulate the local variances in feeding that can develop over the vastness of an industrial cell. By measuring individual anode voltages, currents and temperatures valuable information regarding partial and low voltage anode effects can be gained.

The results indicate that it is possible for at least one anode to go into, and out of what is believed to be partial production of PFC. It was also discovered that this mode could be sustained for a half hour before a traditional anode effect with full blocking of the surface was experienced. 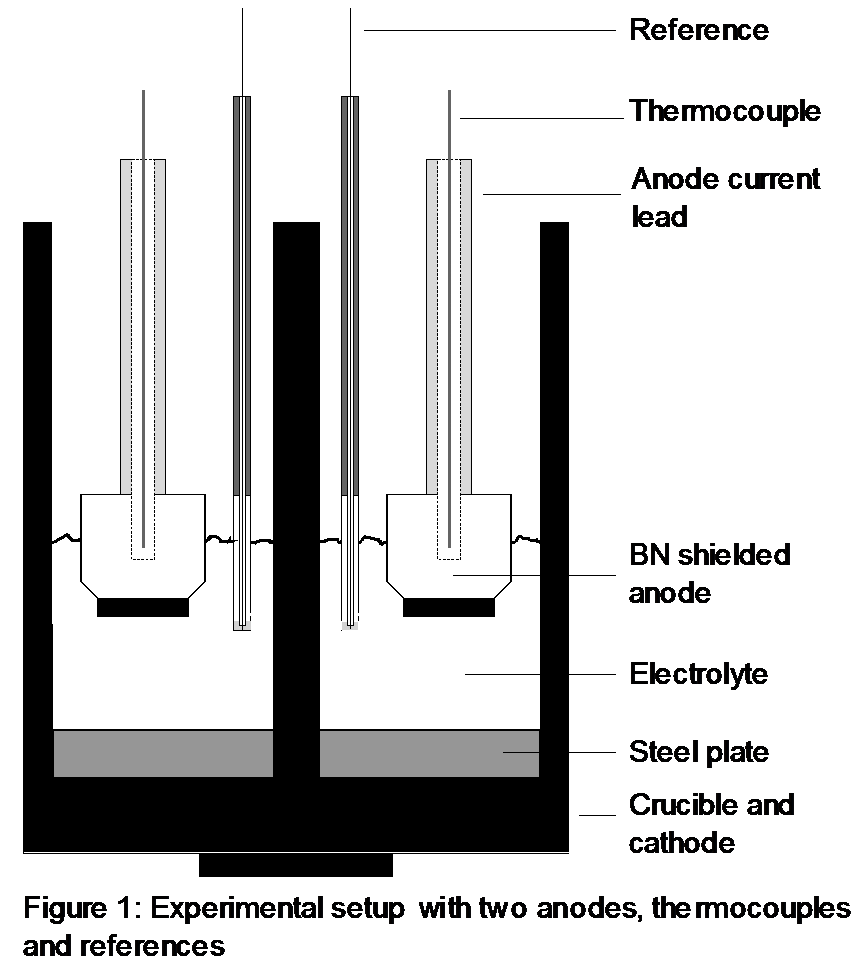