Russell A (Hyatt Regency)
L. G. Bland, J. Fitz-Gerald (University of Virginia), and J. R. Scully (University of Virginia)
Research on Mg alloys and their corrosion properties has received increased interest from the automotive, aerospace and naval industries [1]. In particular, the effect that processing, such as welding, has on the intrinsic corrosion properties of Mg and Mg alloys is of interest for the application of architecturally complex Mg structures. In addition, for industrial sandwich panels, Mg has been proposed as a potential material [2]; however, the metallurgy and corrosion of these welded structures must first be understood.

The major concern is that the high reactivity of Mg and low electronegative potential makes Mg and its alloys extremely susceptible to galvanic corrosion when alloyed with elements which have dissimilar oxidation potentials. Micro-galvanic coupling may occur due to alloy heterogeneity caused by intermetallic particles (IMPs) [3]. For the alloy of interest in this study, AZ31, alloying elements include Al, Zn, Fe and Mn.  Corrosion is exacerbated by differing concentrations of these alloying elements along with phases formed within adjacent regions of the sample during tungsten inert gas (TIG) welding.

During processing, a range of solidification-driven microstructures develop across the weld region which are dependent on the initial composition relative to phase equilibrium as well as the competition between the solidification rate and phase transformation characteristics. The nature and the stability of the solid-liquid interface is determined by the thermal and constitutional conditions at this interface [4]. Depending on these conditions, epitaxial interfaces may occur by planar, cellular, or dendritic growth [5]. Both the temperature gradient and growth rate are important for the final microstructure.

The weld can be separated into several distinct zones with different microstructures and compositions. These include the Fusion (FZ) and the Heat Affected Zones (HAZ) labeled in Figure 1 where HAZ1 and HAZ2 are specified as two separate regions which have been affected during processing to produce slightly different microstructures from the base plate. The FZ represents a region of direct interaction with the weld tool or heat source such that complete melting and resolidification has occurred.  The HAZ represents a region where sufficient heat input via the FZ is being conducted away in the material, resulting in significant recrystallization and grain growth, reduced hardness over the base material and a local variation in chemistry including formation of intermetallic particles.  The zones have distinct characteristics which must be identified, dependent on processing regime and starting composition. Processing in this non-equilibrium regime will lead to significant changes in the solidification microstructure within the FZ and HAZs. These changes include localized changes in grain size, precipitate size, shape, distribution and grain orientation. Given the electronegative potential of Mg, these compositional and microstructural variations throughout the weld regions can lead to a pronounced shift in the electrochemical potential across the weld resulting in enhanced galvanic corrosion between adjacent weld zones and within a given weld zone.

After welding, the global corrosion rate was determined in 0.6 M NaCl after 3, 24 and 48 hrs of immersion at the open circuit potential (OCP) using electrochemical methods. Time lapse video was recorded from an optical microscope over a 24 hr period to observe the evolution of the corrosion behavior as dark regions [6] across the weld zones with time. The video provided real-time insight regarding the location of corrosion within the weld zone relative to the FZ and the HAZs as a function of time. The controlling region in weld corrosion can be determined from these videos by examining the dominate location of the hydrogen evolution reaction and darkening [6] within the weld cross-section. It is observed that both the HAZ and base plate regions corrode prior to the FZ. The galvanic coupling and evolution of this intrinsic corrosion behavior between the weld zones will be explained using a combination of in-situ time lapse videos, SEM, scanning electrochemical microscopy (SECM), surface analysis and mixed potential theory.

This work was funded by the Office of Naval Research Grant N000141210967 with Dr. David A. Shifler as scientific officer. 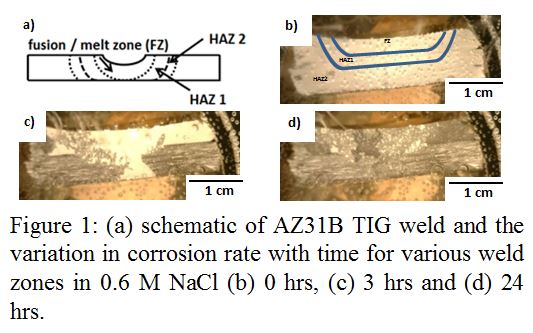