Recently, we have developed a new nanofiber electrospinning strategy, where a single solution of a binary polymer mixture consisting of ionomer (i.e., Nafion) and reinforcing polymer, poly(vinylidene fluoride) (PVDF), is electrospun, followed by hot-pressing the resultant nanofiber mat (Figure 1a) into a dense and defect-free membrane. In a further modification of this membrane preparation strategy, we have electrospun Nafion/PVDF blended fibers onto a target drum that is rotating at very high RPM and obtained mats with highly aligned fibers (Figure 1b). To create a membrane, the aligned fiber mats were stacked in multiples layers (with fibers of successive mats rotated 90o) and then hot-pressed, followed by ionomer annealing.

Our presentation will focus on the fabrication and characterization of the electrospun Nafion/PVDF membranes from random and aligned nanofiber mats, for use in H2/Br2fuel cells. The membranes will be compared to solution cast Nafion/PVDF blended films and to commercial Nafion 212 in terms of morphology, proton conductivity, swelling, bromine species permeability and mechanical characteristics. 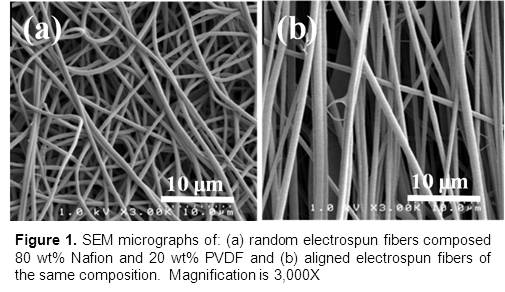