West Hall 1 (Phoenix Convention Center)
L. Zhou, M. Arugula, C. J. Easley, C. Shannon (Auburn University), and A. Simonian (Auburn University)
Here, a novel Multi-Parametric/Multimodal Spectroscopy Apparatus (MPMS) is designed to characterize the dynamics in the process of molecular interactions at interfaces, which integrates several synergistic surface characterization spectroscopic methods such as surface plasmon, fluorescence, and electrochemistry into one new surface analytics. Electrochemical Proximity Assay (ECPA) is used here to demonstrate novel apparatus capabilities. ECPA is a flexible method with high potential for quantitation of a variety of proteins in clinical laboratory settings or at the point-of-care. Since this method was only recently developed, there is much to learn about mechanisms of action and dynamics of sensor and/or protein recognition. In the process of ECPA, the target protein is detected via antibody DNA strands tagged with fluorescence dye or an electrochemical label such as methylene blue, so that during the dynamic binding the SPR can generate signal upon assembly of each step. Furthermore, surface fluorescence is only changed upon assembly of the labelled DNA strand, while electrochemical signal is only observed upon binding of the methylene blue (MB) labelled DNA strand. In this way, the SPR signal will thus give a non-biased view of all steps of assembly, with simultaneous fluorescence to label and monitor specific portions, and electrochemistry to allow high sensitivity and quantitative characterization of surface coverage. Therefore, the MPMS system will allow an unprecedented level of fundamental understanding of the dynamics of the ECPA process. With increasing interest in functional interfaces, it becomes increasingly important to characterize chemical structures and biomolecules on surfaces in a quantitative fashion, and to test their proper allocation orientation, conformation, activities, stability, etc. This newly developed MPMS system can overcome several key limitations of current, widely-used surface characterization technology, and facilitate new quantitative insights into the interactions of a broad range of chemical and biological species with rationally designed interfaces. 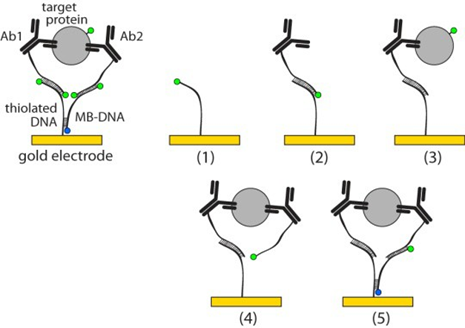