Moreover, we show the construction of a chicken model to evaluate the detection of Salmonella on/in chicken meat using the phage coated sensor. In the surface detection system, S.  typhimurium solutions at four concentrations of 2.5x106, 5x106, 2.5x107, and 5x107 cfu/ml were inoculated on the surface of chicken breast. Three phage sensors as a test group were placed on the chicken surface for detection. Experiments were repeated twice. Phage sensors were prepared by coating the ME sensors with 1x1010 virons phage C4-22 in TBS. BSA (0.1%) was used as a blocking reagent on the sensor. Sensors coated with 0.1% BSA only served as controls. Cells of S. typhimurium detected on the sensor were eluted with 0.1M Glycine to break phage-Salmonella binding. The percent of Salmonella binding to the phage coated sensor was determined using a standard aerobic plate count method with TSA and BG plates. Phage C4-22 sensors demonstrated more than 12 times higher Salmonella binding capacity than the control sensors at the Salmonella loading concentration of 5x107cfu (Fig.2).

In summary, phage C4-22 ME biosensors detect well when there are high concentrations of Salmonella on the chicken surface. The inside meat detection allow us to effectively monitor Salmonella cells which were absorbed into the chicken and unable to detect by the biosensors while using a surface detection method. 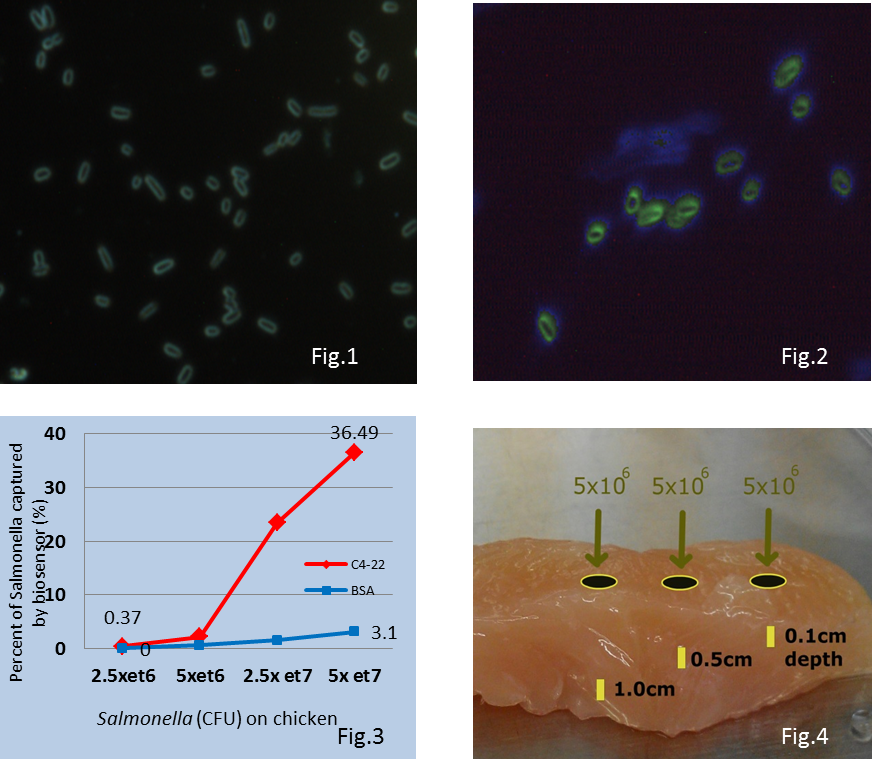