In order to find new nitridosilicate phosphors, a single-particle-diagnosis approach [1] has been developed in our group, based on single-particle spectroscopy techniques. One of the phosphors that has been found via this method is Eu2+ doped La4-xCaxSi12O3+xN18-x; a phosphor that was also found independently by Park et al. via a combi-chem approach [2]. The material has a strong 5d-4f emission band in the 450 to 650 nm range after 4f-5d excitation with UV or blue light, making it an interesting phosphor for LED applications.

Doping with Ce also gave rise to 4f-5d absorption bands, that resulted in blue 5d-4f emission after excitation with UV light. The results with Ce doping were compared with the results with Eu doping, regarding the distribution of the lanthanides over the two crystallographic sites.

The information on the 4f-5d transitions of Eu and Ce, together with the thermal quenching data has been used to construct an energy level scheme (Figure 1b), showing the energy level positions of all lanthanides in La4-xCaxSi12O3+xN18-x relative to the valence and conduction band. With such a scheme the optical properties of all other lanthanides in the same host can be predicted and understood. [3] The scheme could be used to explain the absorption and emission spectra of samples doped with samarium and ytterbium, with regards to the positions of the charge transfer bands, the valence of the dopants and the thermal quenching behavior. 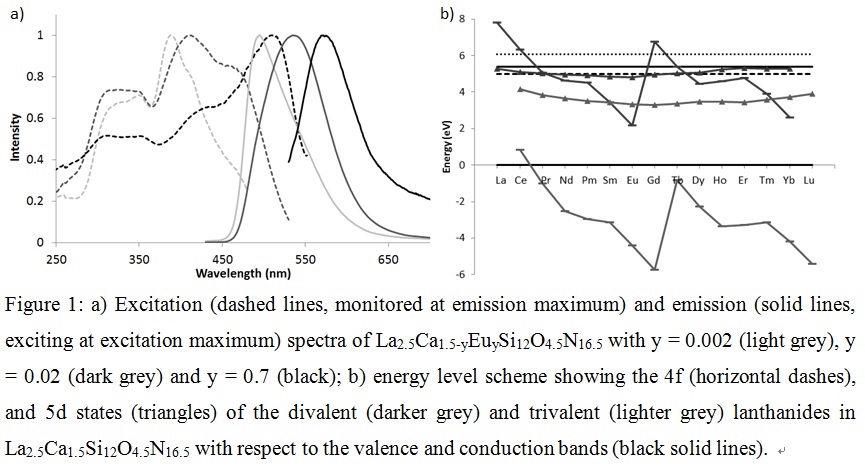