Rechargeable Li-air battery has attracted much attention as a candidate of the potential next-generation energy-storage devices, because of its significantly high theoretical capacity, which potentially extend the one-charge cursing range of electric vehicles to the comparable level with internal combustion engine. There are, however, several technical issues in realizing the practical application of rechargeable Li-air battery, such as, the large over-voltage in the charge process, irreversible unwanted side reactions, the low cycleability due to electrolyte deterioration, and the dendrite growth of Li metal on the anode surface during charge/discharge cycles.

A choice of appropriate electrolytes and/or Li-salts and the development of them is a promising approach to solve above issues. Recently, the combination of tetraethylene glycol dimethyl ether (TEGDME) solvate and lithium bis(trifluoromethanesulfonyl)amide (LiTFSA) salt has been demonstrated to exhibit excellent improvement: the over-voltage in charge process was significantly lowered, the irreversible Li2CO3production reaction at cathode-electrolyte interface was suppressed. Thus, understanding details of this system, such as, solution structures, mechanism of ion conduction in bulk electrolytes, and electrochemical reactions on electrode-electrolyte interfaces, is important to gain information on designing better electrolyte solutions. In this study, we therefore investigated molecular-level structure and mechanism of ion conduction in the electrolyte, in TEGDME + LiTFSA solution by using a large-scale first-principles molecular dynamics (FPMD) calculation.

FPMD calculation: First-principles calculation code OpenMX[1] was applied to our simulation. DFT calculation was implemented with O(N) (linear-scaling) method based on Krylov-subspace method.[2] O(N)-DFT calculation was performed using a generalized gradient approximation (GGA-PBE) and norm-conserving type pseudopotentials. Cutoff energy was set at 230 Ry. Double-numerical + single polarization type localized basis sets were adopted (cutoff radii (Bohr): Li: 10.0; C, H, O, N. F: 7.0; S: 9.0). The MD calculation was carried out in an NVT ensemble at 500 K. Velocities of atoms were scaled every 20 MD steps to keep the temperature constant with the velocity-scaling method. The time step width was 1.2 fs with substitution of the deuterium mass for hydrogen atoms.

First, we show the optimized coordination structures of Li+ in 2.75 M TEGDME + LiTFSA electrolyte. The obtained ratio of Li+[TEGDME][TFSA−], Li+[TEGDME] and Li+[TFSA−] complexes were 72, 4 and 24 %, relatively. This indicates that Li+ has a strong tendency of interacting with both TEGDME and TFSA−, and forming the stable Li+[TEGDME][TFSA−] complex. This result is consistent with experimental analysis that in 2.75 M TEGDME + LiTFSA electrolyte, the self-diffusion coefficients of Li+, TEGDME and TFSA− were almost identical (1.23, 1.33 and 1.16 × 10−7 cm2/s, respectively).

Then, we investigated the structural details of TEGDME molecules in Li+[TEGDME][TFSA−] and Li+[TEGDME] complexes. We define two different angles consisting of oxygen atoms in TEGDME molecule, O2-O1-O2 and O3-O1-O3 (see inset of Figure) as a structure index of TEGDME molecule. The average values of angles O2-O1-O2 and O3-O1-O3 were 118.1 and 102.7 degree, respectively. The radial distribution function analyses on Li-O2 and Li-O3 has shown that the coordination numbers of Li+ for O2 and O3 were 1.89 and 1.77, respectively, which are similar to each other and close to 2. These results indicate that in 2.75 M TEGDME + LiTFSA electrolyte, TEGDE molecules constructing complexes with Li+ have strongly-curved structures wrapping around Li+. Such unique solvation structure could be a key to exhibit excellent battery properties. Results of ion conduction mechanism analysis will also be presented and discussed combined with our other experimental results.

This work was supported by the Strategic Programs for Innovative Research (SPIRE), MEXT, and the Computational Materials Science Initiative (CMSI), Japan. The computations in this work were performed using the computer “K” at the Advanced Institute for Computational Science, RIKEN. 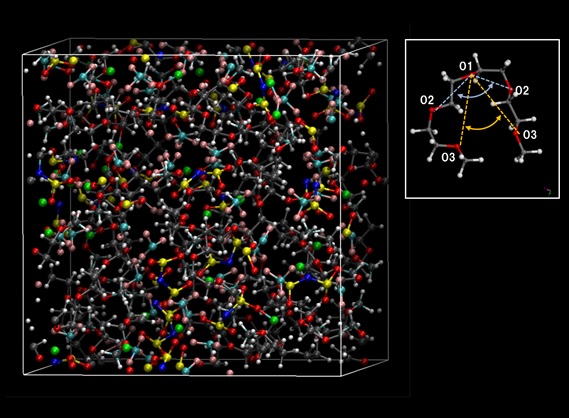