The anion-conducting electrolyte membrane fuel cells (AEMFCs) have attracted considerable interest due to their significant advantages over proton conducting electrolyte membrane fuel cells (PEMFC). Because AEMFCs operate under alkaline environments, non-precious metals can be used as active catalysts (e.g. nickel, cobalt and iron) and electrochemical reactions are more facile than in acidic medium. Further advantages include amongst others is the fuel flexibility. The hydrazine hydrate, which has higher energy densities than H2, is one of the powerful options. However, there are still some challenging issues in the practical application of AEMFC. One of the key challenges is to synthesize an alkaline durable anion-conducting electrolyte membrane (AEM), which can survive high temperature and highly basic fuel cell operating conditions.1,2 In recent years, we have developed imidazolium-type AEMs by radiation-induced grafting for direct hydrazine hydrate fuel cells (DHFCs) and founded that copoly(N-vinylimidazolium/styrene)-grafted AEM shows moderate alkaline stability; the AEMs degraded via the initial β-elimination of the imidazolium unit.3 In this work, we synthesized the AEM based on a poly(p-(2-imidazoliumyl)styrene (2STZ)) grafts by radiation-induced grafting to exclude β-hydrogen from the structure.

The 2STZ was provided from Shikoku Kasei Kogyo, Japan. This was first mono N-alkylated by sodium hydrate and methyl or propyl iodide in a standard manner, yielding methylated (MeSTZ) and propylated (PrSTZ) monomers.4 The poly(ethylene-co-tetrafluoroethylene) (ETFE) films were irradiated with a 60Co γ-ray source (JAEA Takasaki, Gunma, Japan) at room temperature in argon atmosphere with an absorption dose of 80 kGy. The pre-irradiated ETFE films were immediately immersed into the argon-purged monomer solution consisting of 33 vol% of MeSTZ or PrSTZ in 1,4-dioxane. The imidazole groups in the grafted-ETFE were N-alkylated using alkyl iodide. The resultant AEMs (an iodide form) were immersed in 1 M HCl - dioxane (1 : 1 volume ratio) solution at 60°C for 24 h to convert into a Cl- form, followed by the ion-exchange reaction with OH- in 1 M KOH solution at room temperature for 16 h. The solution for each ion exchange reaction was changed 3 times during the process to give the OH- forms of the AEMs (Me-MeSTZ, Me-PrSTZ and Pr-PrSTZ) (Scheme 1). The ionic conductivity was measured by two-point probe AC impedance spectroscopy at 100% relative humidity in N2-purged deionized water. The ion exchange capacity (IEC) was measured using standard back titration methods. The alkaline stability of AEMs was evaluated by monitoring the change in conductivity of AEMs in 1 M KOH at 80°C.

Figure 1 shows the normalized conductivities of the AEMs on the basis of the initial conductance as a function of immersion time. The Me-MeSTZ and Pr-PrSTZ AEMs showed similar profiles for conductivity decreases, while unsymmetrical Me-PrSTZ showed good alkaline stability. The conductivity loss was mainly caused by imidazolium ring opening degradation reaction,5 which triggered by the attack of hydroxide ion at the 2-position of imidazolium ring. Thus, these results indicated that the steric protection of 2-position is important, however, too much protection causes steric repulsion of alkyl chains attached on the nitrogen of imidazolium ring, resulting in the unstable manner in alkaline conition. Accordingly, the p-(2-imidazoliumyl)styrene-graft with appropriate N-alkyl substituents is promising AEM for alkaline durable direct hydrazine fuel cells.

This work was supported by the Advanced Low Carbon Technology Research and Development Program (ALCA) from the Japan Science and Technology Agency (JST). 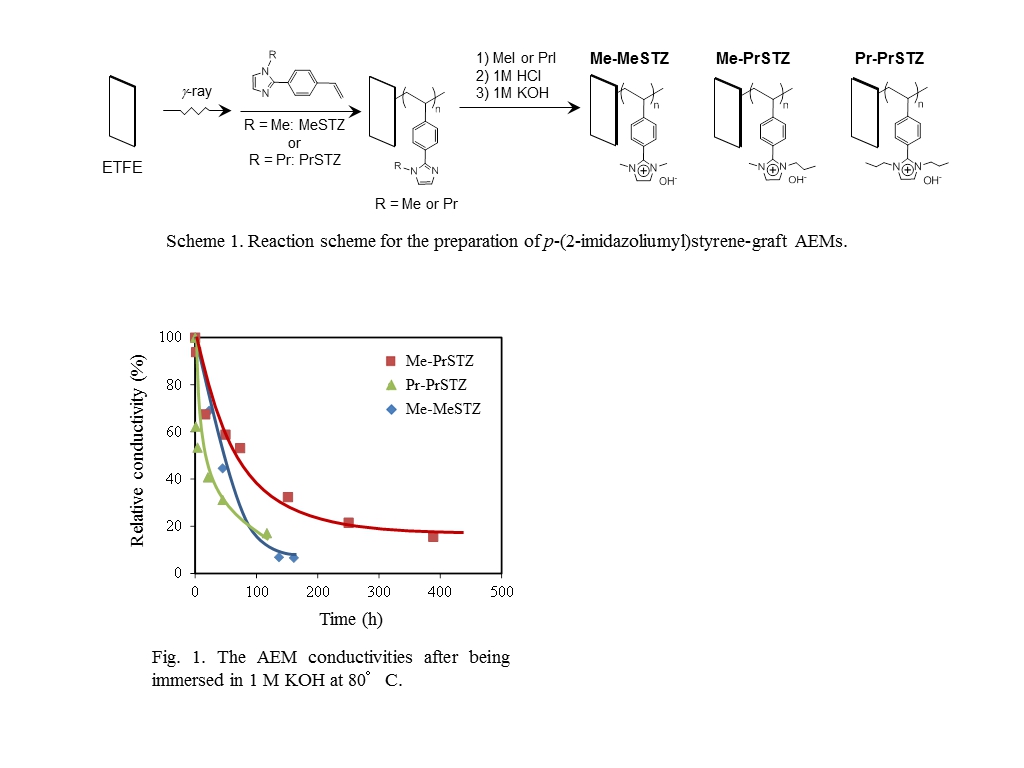