When one mole of tetrahedral zinc dichloride (ZnCl2) and cubic potassium chloride or sodium chloride, a thermally stable complex forms. The corrosion of metal in molten salt, its physical stability and heat transfer properties are needed to determine if metal can house these salts used as heat transfer fluid (HTF) for concentrating solar power (CSP) to generate electricity. Preliminary results show that some ternary mixtures, like NaCl-KCl-ZnCl2 in molar fractions of 13.4%-33.7%-52.9% melt near 200oC and have very low vapor pressures (~ 7psig) at 800oC and has satisfactory thermal and transport properties for collecting solar energy up to 800oC [1]. High corrosion rates of metals in this molten salt are found for aerated salt, but metal corrosion rates are low when the salt is anhydrous and deoxygenated.

A working and a counter electrode of C-276 Hastelloy and a silver/silver chloride reference electrode (0.2 V vs NHE) are housed in a quartz electrochemical cell isothermally heated in a furnace. The C-276 Hastelloy is polished with 600 grit SiC paper, rinsed with DI water and acetone. Linear polarization [2] was used to electrochemically characterize the rate of metal oxidation by scanning the working electrode from -30 mV vs. OCP to +30 mV vs. OCP at a scan rate of 0.2 mV/s. The atmosphere of salt in the cell is controlled by heating to 300°C to melt the salt; sparging salt for about 30min with Argon  flowing at 150 sccm. The metal sample is inserted into salt and gas passed over salt during the polarization study. Gas is bubbled into the salt when heating to a new temperature, then over salt during polarization at the new temperature. For Fig. 1, the Hastelloy C276 metal area is 5.15cm2 in 150 grams of KCl-NaCl-ZnCl2 salt.

Acell with two caps is used to gravimetrically determine corrosion rates. One cap has a long tube to bubble gas into the salt; the other has a short tube to keep gas over the salt. This decreases the salt lost while flowing Argon to maintain the anaerobic condition. For example, the initial weight of metal in one experiment was 10.5830 gm (58 cm2); the mass of salt 300 gm; the salt temperature 800oC, and immersion time 50 hours (2.08 days). The salt was heated at 250°C for 1 hour, then 30 minutes at 350°C without flowing Argon; heated at 500°C for 1h with Argon flowing at 175 sccm without metal in the salt toremove water and oxygen.  Argon gas is admitted from a side tube at about 450 sccm to prevent air entering cell as the metal coupon is added and the cap switched from the long tube to short tube. The Argon was kept flowing through the cell cap at 175 sccm and the side tube at 450 sccm. The temperature was 800°C for 50 hours. The metal sample was removed from the cell at 300°C by pouring all contents into a quartz beaker. The metal was sonicated in DI water, then in dilute HCl, then in DI water, 15min each at RT. The sample was re-weighed. The corrosion rate, CR, was 53.34 mpy. This test was repeated with a metal coupon, 5.205 cm2 in area with all other conditions constant. The corrosion rate was 30.29 mpy at 800oC.

The anaerobic immersion experiments give low corrosion rates because water and oxygen are removed from the salt. The comparison between the small and large coupons indicates sample size does not limit corrosion. The CR from the gravimetric method is consistent with that from the electrochemical method. The C276 metal in the selected salt appears intrinsically stable at elevated temperatures in absence water and oxygen.

The authors gratefully acknowledge the US Dept of Energy for support of this work under Sunshot MURI Program grant number DE-EE0005942.  DOE Technical Manager, Levi Irwin. 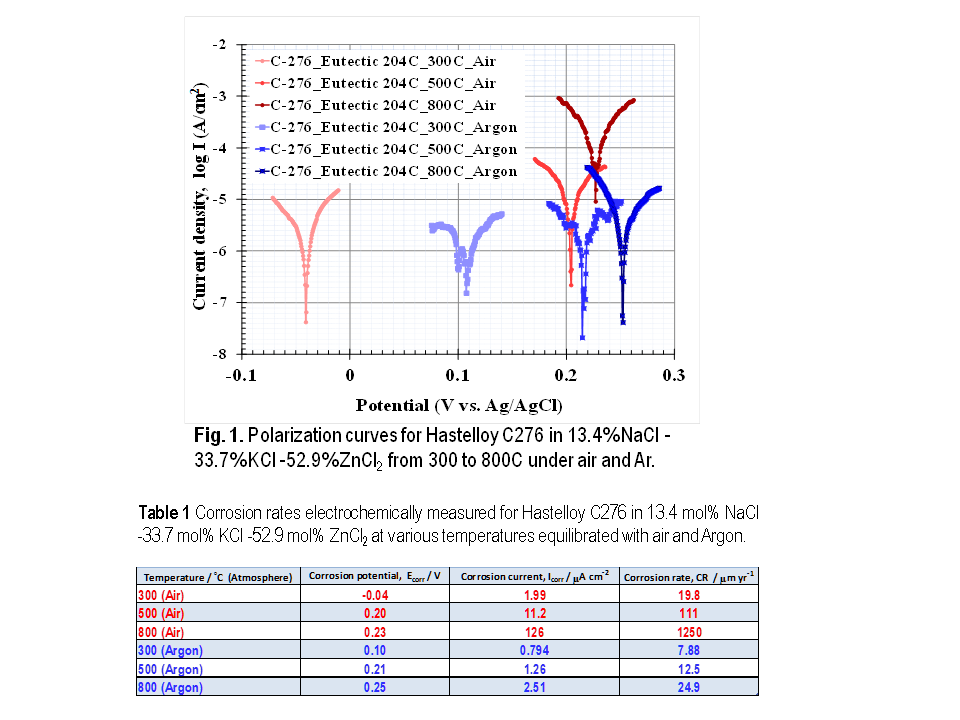