“Nanosheets” are plate-like particles with thickness of only a few nanometers and lateral size of about 0.1–1 μm. They can be easily assembled into thin films via room-temperature solution processes without heating or evacuating. Thin-film devices with various functions can be easily fabricated by laminating several films of restacked nanosheets. Recently, all-nanosheet dielectric capacitors were fabricated by laminating electron-conductive nanosheets of Ru0.95O20.2− as electrodes and dielectric nanosheets of Ca2Nb3O10− as an insulator, and they were proved to work as energy storage devices [1].

Here, we focused on the fact that the Ru0.95O20.2− electrodes have redox activity as well as electron conductivity. These electrodes can be used for electrochemical capacitors, which employ redox reactions of electrodes and thus have a larger capacity than that of dielectric capacitors. For utilizing redox reactions, it is needed to replace the insulator with ion-conductive nanosheets. In this study, all-nanosheet electrochemical capacitors were fabricated and evaluated. As the ion-conductive materials, nanosheets of layered double hydroxide ([Mg0.75Al0.25(OH)2](X2−)0.125·nH2O : LDH) were selected. As the electrodes, nanosheets of layered ruthenium dioxide (H0.2RuO2·nH2O : RuO2) were selected.

In the Galvanostatic charge/discharge tests in KOH aq. electrolyte, single RuO2-nanosheet electrode showed a reversible capacity of 83 mAh g−1. Considering that a plateau was observed at about −0.4 V (vs. Hg/HgO) in the charge/discharge curves, the redox reaction of RuIII ↔ RuIVis suggested as below:

The obtained capacity of single RuO2-nanosheet electrode was about 44 % of the theoretical capacity of the reaction above.

Fig.2 shows the Galvanostatic charge/discharge curves of the (RuO2 | LDH | RuO2) at a current of 50 μA. No recognizable plateau regions were observed in the curves. The (RuO2 | LDH | RuO2) exhibited a reversible capacity of 20 mAh cm−3 (~ 3 mAh g−1). Here, the volume or weight used for the unit of the capacity is that of the total of two electrodes in the electrochemical capacitors. The observed capacity was about 26% of the ideal one, which was estimated from the Galvanostatic charge/discharge curves of the RuO2-nanosheet electrodes in KOH aq. electrolyte. This result suggests that the energy was stored in faradaic processes with the redox reaction above. Considering the fact that the carrier ions in LDH are OH− and those in RuO2 are H+, charges might be transported by adsorbed water at their interface.  In addition, the (RuO2 | LDH | RuO2) showed almost no cycle degradation during the tests of 20 cycles.

In conclusion, all-nanosheet electrochemical capacitors were fabricated via room-temperature solution processes, and they worked as energy storage devices with a larger capacity than that of dielectric capacitors. 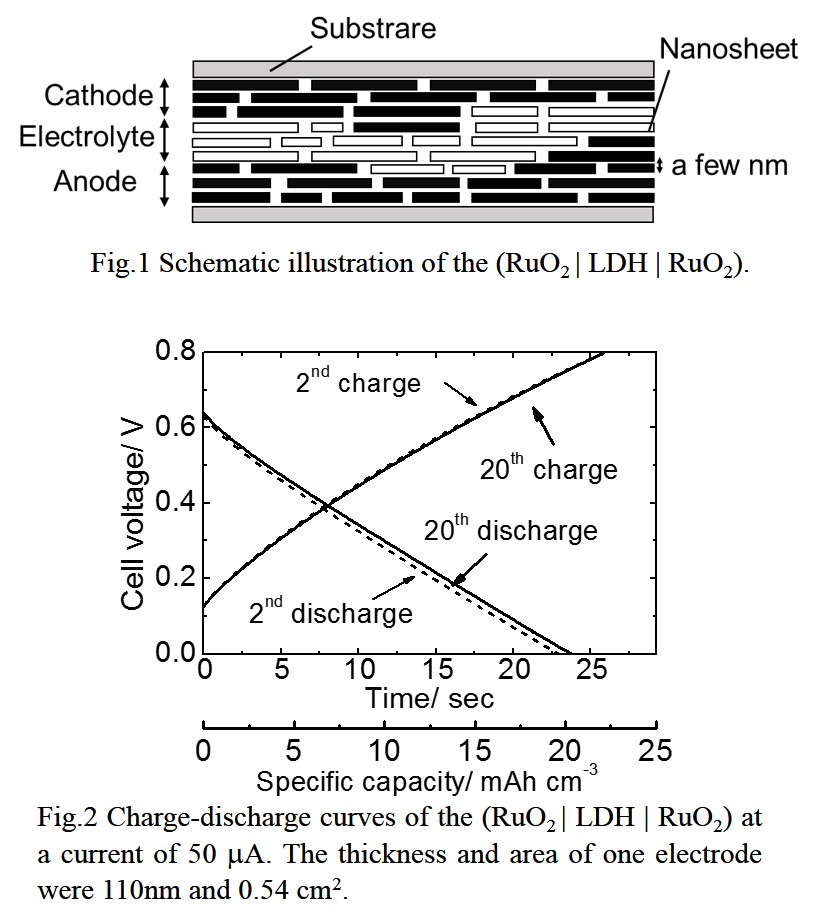