1594
Zncds:Cu, Al, Cl: A Near Infra-Red Emissive Phosphor for Marking, Coding, and Identification

The advantages of IR emitting powder phosphors are:-

1)      That they can easily be deposited by conventional techniques to form large areas, if required, either by simple settling techniques, or by inclusion in a binder suitable for screen or ink-jet printing (the binder must be transparent over the required spectral range).

2)      Such deposited powder layers, depending on thickness and particle size etc., can be used in a transmission or reflective mode with suitable UV or visible excitation sources.

The ease of fabrication and the wide excitation spectra efficiency of the material facilitate a wide range of potential applications, including the following as preliminary examples:

a) For use in coding/marking systems as simple IR sensitive markers.

b) For improved marking/detection in conjunction with night vision systems.1

It has been reported that increasing the cadmium concentration in Zn1-xCdxS solid solutions shifted the photoluminescence emission band to longer wavelength because the band gap energy (Eg) decreases with increasing cadmium concentration, from 3.91eV for ZnS to 2.58eV in CdS.2  Werring et al used Zn0.4Cd0.6S:Cu with an emission peak at ~900nm in order to match with the absorption peak of a silicon thyristor for use in an infrared switching device.3

Altering the zinc to cadmium ratio allows fine tuning of the wavelength of the photoluminescent emission band.  The aim of this work was to shift the emission peak of the phosphor sufficiently far into the infra-red region so that visible light emission was minimised and the infra-red emission from the phosphor was clearly detectable by night vision systems.  Zn1-xCdxS:Cu phosphors with higher cadmium concentrations higher than Zn0.4Cd0.6S:Cu  were selected for study with the aim that the increased cadmium concentration would result in the emission band being moved sufficiently far into the near infrared region.

For the excitation spectrum of each phosphor (Figure 1a) there was a broad peak at ~365nm, a more intense sharp peak between ~460-505nm which shifted to longer wavelengths with increasing cadmium concentration, and an intense very broad excitation band between ~520nm and ~645nm.  The relatively strong excitation band at ~365nm facilitates the use of long wavelength UV lamps and UV emitting LEDs as backlights for the infrared emission panels and broad excitation in the blue region means that these IR emitting phosphors could also be excited by blue light emitting LEDs.

Addition of aluminium ions as a co-dopant in these phosphors resulted in a blue shift in emission intensity (Figure 1b) compared to the corresponding Zn1-xCdxS:Cu0.03,Cl phosphors (Figure 1c).   The shift to shorter wavelengths was ~70nm for Zn0.5Cd0.5S:Cu0.03,Al0.03,Cl but decreased in intensity with increasing cadmium concentration.  The blue shift for Zn0.9Cd0.1S:Cu,Al,Cl was ~30nm. 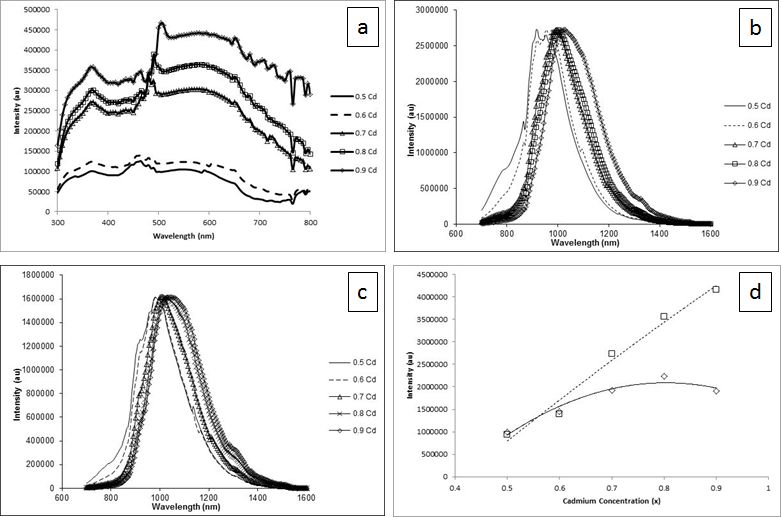