West Hall 1 (Phoenix Convention Center)
H. S. Choi (Chungnam National University) and Q. C. Tran (Chungnam National University)
We first report the synthesis of a highly ion-conductive polymeric membrane through using a liquid plasma system under an atmospheric pressure. The 1-butyl-3-methylimidazolium tetrafluoroborate ([BMI]BF4) and Triton X-100 were used as reacting monomers. These radical monomers, which form cross-linked polymeric films after reaction, are generated at a gas-liquid interface through the irradiation reaction of plasma species with a homogenous solution of [BMI]BF4 and Triton X-100.  The as-synthesized polymer films were eventually observed at the gas-liquid interface under an atmospheric pressure. The thickness of the polymer film was controlled with different molar ratios of [BMI]BF4 and Triton X-100, and plasma reduction time. The maximum thickness of polymer film was 3.043 µm after plasma irradiation for 10 min at a molar ratio of 65:1 for [BMI]BF4:Triton X-100. Furthermore, the application of the synthesized polymer film as an alternative lithium ion conductive polymer leads to high ionic conductivity as well as small impedance as seen in Figure 1 and 2. 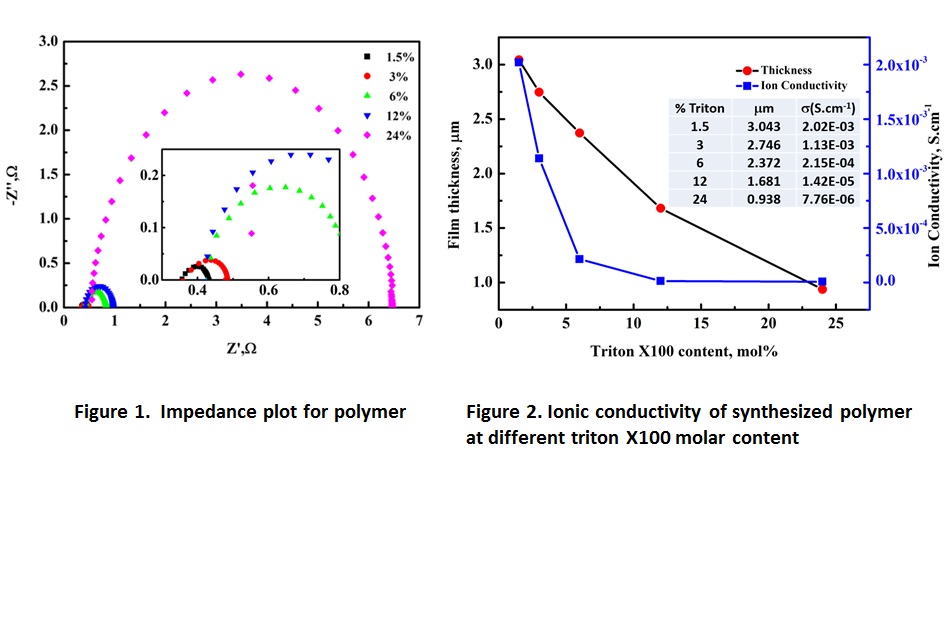