Solid Oxide Fuel Cells (SOFCs) operate at high temperature, and thus various fuels can be used due to internal reforming reactions of the fuel. Our research group previously developed Rechargeable Direct Carbon Fuel Cells (RDCFCs) in which the solid carbon deposited by thermal decomposition of hydrocarbon is used as fuel [1, 2].

We also developed Pulse Jet-Rechargeable Direct Carbon Fuel Cells (PJ-RDCFCs) as a new type of RDCFC [3, 4]. In a PJ-RDCFC, liquid hydrocarbon is supplied, thus enabling as fuel the use of hydrogen, lower hydrocarbons, and the solid carbon by thermal decomposition of the liquid hydrocarbon. The operating conditions of a PJ-RDCFC are broader because such conditions can be controlled by adjusting the fuel-supply interval time (Tint), the amount in a single pulse (PJvol), and the current density (j). The type of chemical species that react in a PJ-RDCFC can be selected by controlling these parameters [3]. Sulfur compounds contained in liquid fuel cause poisoning of the catalyst and increase the amount of deposited carbon, both of which cause catalyst degradation. Anode degradation can possibly be controlled, however, by adjusting the parameters in PJ-RDCFCs so that carbon-removal reactions occur selectivity [4].

Traditionally, Ni/GDC cermet anodes are used in PJ-RDCFCs, but the amount of Ni should be kept at a minimum because of the formation of NiCx. Only a slight difference existed between the power density (P) of RDCFCs with Ni and those without Ni, whereas the P of SOFCs with Ni/GDC was much smaller than those with GDC metal-free anodes [2]. In this research, to develop a metal-free anode that is tolerant against anode degradation, power generation characteristics of a PJ-RDCFC using a GDC metal-free anode and that using a Ni/GDC cermet anode were compared and the role of Ni in the anode was investigated.

In conclusion, power generation of PJ-RDCFCs using a GDC metal-free anode was successful, and suggested that the difference in power generation characteristics is due to the presence of Ni, which is a catalyst of thermochemical reactions. 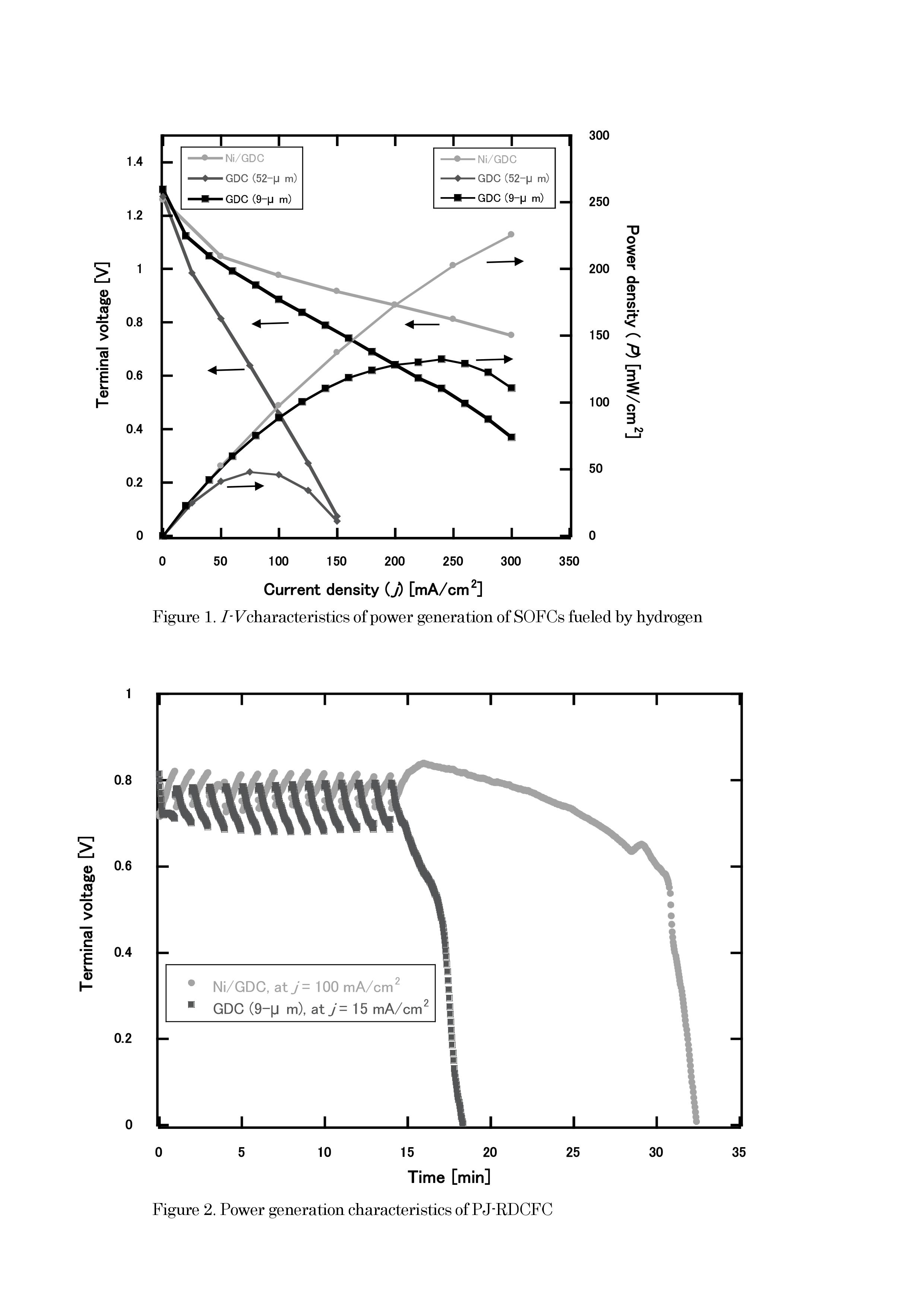