643
(Keynote) The Pretreatment of 2000 Series Al Alloy: In Situ Measurement of the Selective Dissolution & Film Formation

102-A (Phoenix Convention Center)
K. Ogle (Insitut de Recherche de Chimie-Paris) and O. Gharbi (Insitut de Recherche de Chimie-Paris)
The surface conditioning of aluminum alloys frequently involves a sequence of alkaline and acid pretreatments. These steps ideally provide a homogeneous surface chemistry prior to subsequent anodization or conversion treatment. However, the electrochemical properties of the intermetallic phases - such as the S-phase (Al2CuMg) or the θ-phase (Al2Cu) - are sufficiently different from the matrix that certain alloy components will be enriched on the surface due to selective dissolution and / or redeposition. The aim of this study is to quantitatively measure the selective dissolution processes and characterize the residual films that form during these pretreatment steps.

To this end, we have developed an in situ measurement of elemental dissolution during a pretreatment sequence under simulated industrial conditions using atomic emission spectroelectrochemistry (AESEC). This follows previous work on the kinetics of dealloying of the pure S and θ- phase in sulfuric acid [1]. Through a mass balance, the elemental dissolution rates also yield the quantity of residual Cu and Mg.  An example of the experimental technique is shown in Figure 1 for the exposure of an AA2024 T3 alloy to a 1.2 M NaOH electrolyte at 60 °C followed by a water rinse. Shown are the Al, Mg, and Cu dissolution rates as a function of time as well as the electrochemical potential. The Al dissolution rate rises rapidly to obtain a relatively stationary value. The Cu and Mg dissolution rates are detectable but are three orders of magnitude less intense, demonstrating the strongly selective dissolution of Al. The release of Cu and Mg rich intermetallic particles during this stage is indicated by the coincident spikes of Mg and Cu.

The excess residual Cu then dissolves, at least partially, in the subsequent HNO3 electrolyte reaction (not shown here) and the Al is passivated. These results will be combined with a microscopic analysis of the surface and with conventional electrochemistry to clarify the nature of the residual films formed and their effect on the electrochemical activity of the Al alloy under simulated corrosion conditions.  Additional results with Al-Cu-Li alloys and pure S and θ- phase samples will also be presented.

Fig. 1  Al, Cu, & Mg dissolution rates (expressed as equivalent currents) and the electrochemical potential during the exposure of AA2024 T3 alloy to a 1.2 M NaOH at 60 °C.  Intermetallic Cu and Mg rich particles detach from the surface giving rise to the spikes in the Cu and Mg signals. 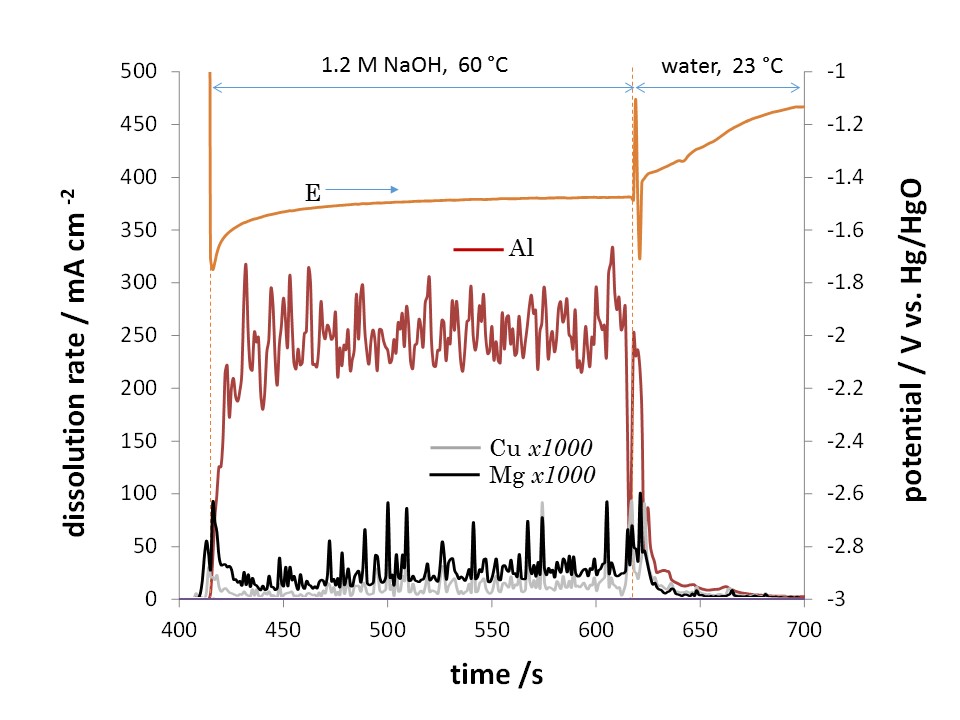