West Hall 1 (Phoenix Convention Center)
B. G. Adams, B. E. Materi, J. Rice, J. Sanders (Tennessee Technological University), and C. A. Rice (Tennessee Technological University)
Electrochemical biosensors present a potential advance in the field of disease diagnosis by providing immediate and accurate results in the detection of pre-specified targets. In most cases, the successful diagnosis and treatment of diseases is reliant upon out-of-date testing instruments that are no longer adequate.  For this reason, it is important to explore the novel combination of established testing methods with modern technology.  For the case of alpha-1-antitrypsin (A1AT) deficiency (A1AD), a complete diagnosis currently requires a minimum of three individual tests performed using blood serum.  The use of a specialized biosensor to detect a deficiency and the form of A1AT could potentially have a dramatic increase in diagnosing carriers of genetic mutations in the A1AT gene sequence that predispose them to early-onset emphysema.

Within the United States, there are approximately 100,000 individuals estimated to have A1AD.  However, estimates suggest that fewer than 10,000 people have been diagnosed with the deficiency, which leaves a wide gape available for improvement in the detection and diagnosis techniques (1).  While no known cure for A1AD exits, it has been widely reported that early diagnosis allows for earlier treatment, improving outcomes of the carrier.

The main purpose of A1AT is to counter human neutrophil elastase (HNE).  HNE is responsible for the removal of harmful bacteria in the lungs as well as other undesirable particles that may be present.  When there is a lack of A1AT resulting in A1AD, the HNE will become in relative excess, resulting in the degradation of elastin, the elastic material of the lungs which may lead to emphysema development (2).  Due to the challenges of diagnosing A1AD, it is often discovered after one exhibits symptoms of emphysema.  The three separate tests that are currently used to diagnose A1AD are the determination of A1AT in the blood, followed by protein phenotyping, and then A1AT genotyping (3).  All three tests are time intensive and require a patient’s serum for sampling.

The use of an electrochemical biosensor could replace the need for all three of these tests within one instrument.  The biosensor would incorporate an eletrochemical quartz crystal nanobalance (EQCN) with an electrode surface that has been functionalized with a biological agent that would bind to an analyte that confirms A1AD.  A visual representation of the electrode surface is provided in Figure 1 for the binding of an analyte on the functionalized gold surface.  Lomant’s Reagent, dithiobis(succinimidyl propionate) (DSP), has been used in several other biosensors to functionalize the gold surface of the electrode (4).  DSP is a preferred reagent due to the functionality provided by the carboxyl group as well as the length of the carbon backbone.

An electrochemical biosensor allows for the measurement of a biological sample through redox responses by measuring both conductivity or resistance through the electrode as well as any changes in mass on the surface of the electrode by the EQCN.  The dual functionality of the EQCN in measuring the electric and mass parameters allows for accurate detection of biological analytes and greatly reduces the concern for false negatives or positives.  It is the goal of this work to develop and test an electrochemical biosensor with an EQCN that will be readily available in the medical field to allow accurate and timely results for the detection of A1AD.  This technology has the potential to increase early detection and diagnosis of many different diseases which allows for early treatment and could potentially improve outcomes for those afflicted. 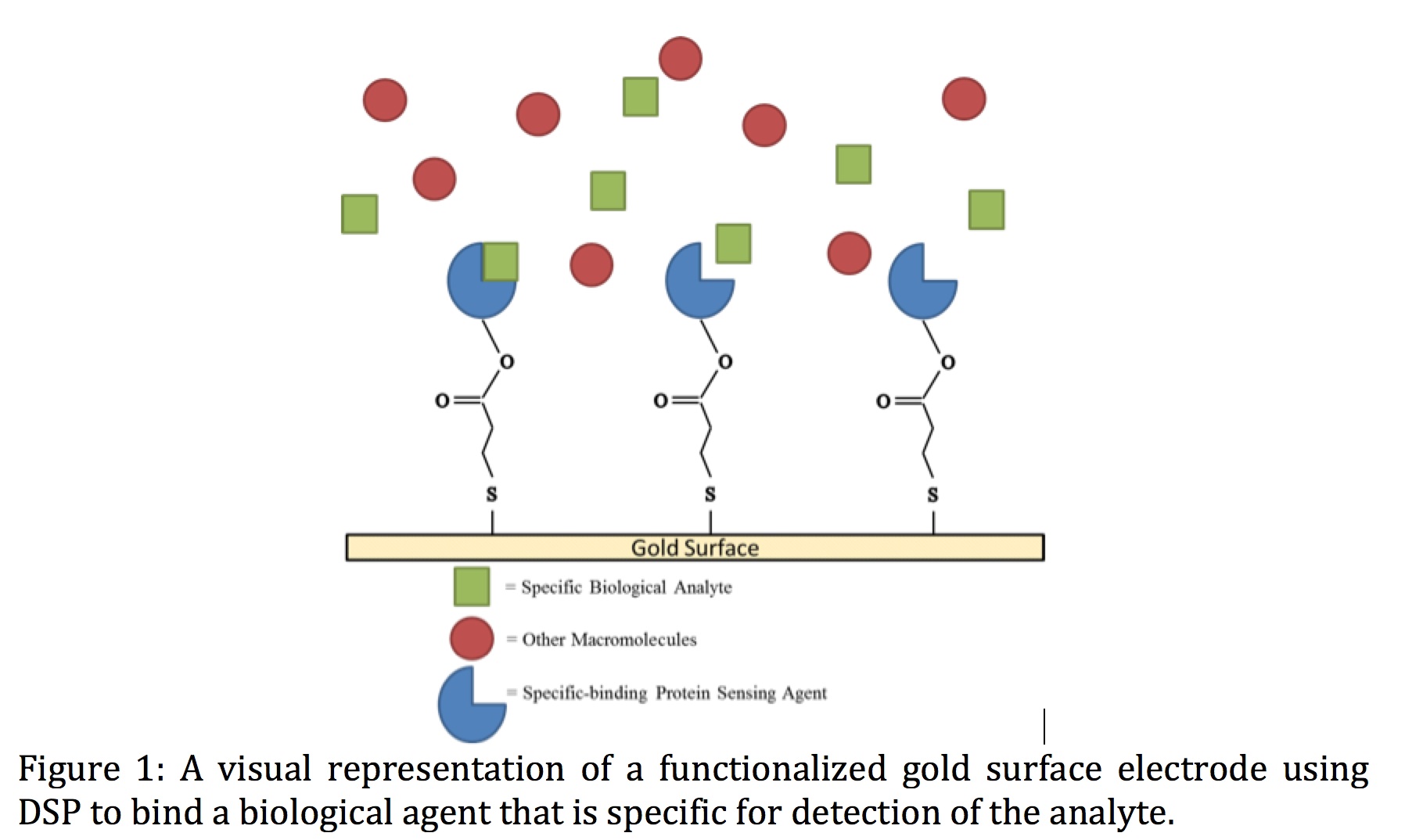