211-B (Phoenix Convention Center)
T. Sasabe, T. C. Jao, T. Yamaguchi, S. Uemura (Tokyo Institute of Technology), and S. Hirai (Tokyo Institute of Technology)
Durability is a major hindrance to the mass commercialization of polymer electrolyte fuel cell (PEFC) combined heat and power (CHP) systems and is adversely affected by contaminants. Fuel and air contaminants are major sources of contamination, and these contaminants cause performance degradation and irreversible damage to PEFCs. The performance degradation is manifested as kinetic, ohmic, and mass transfer losses. The most devastating consequence of fuel and air impurities in PEFCs is manifested as kinetic loss, and catalyst poisoning is the main cause of this phenomenon. The catalyst poisoning occurs when impurities adsorb on the surface of Platinum catalyst and blocks the active site of the catalyst. Ambient air is the most practical source of oxygen for PEFCs, but impurities in air can severely degrade PEFC performance, and the Sulfur contaminants, such as SOx, are the most detrimental to PEFCs [1]. From this background, extensive number of research for understanding and mitigating the catalyst poisoning has been carried out.

The bipolar plate has the rib and the channel geometry in order to make electron transport pass to current collectors, to supply enough oxygen to the reaction site, and to remove water from the cathode catalyst layer (CL) to gas channels, and the transport of contaminants to the catalyst site is not uniform. Therefore, current density distribution in the rib/channel direction might be affected by the contamination, and the increase of local current density leads to water flooding in the CL. However, there are limited studies on the impacts of contamination distribution on current density distribution and mass transport loss.

In this study, we focused on the influence of Sulfur dioxide (SO2) contamination on the cell performance. To clarify the effect of SO2contamination on the performance distribution, change of the liquid water distribution within the membrane electrode assembly (MEA) was quantitatively visualized by in-situ soft X-ray imaging technique, and the change of electrochemical surface area (ECSA) was evaluated.

Figure 1 shows the change of cell voltage at the current density of 1.0 A/cm2 during continuous injection of SO2. The cell temperature was 80 deg.C, and the relative humidity was 80%. High purity H2 was used for the anode feed, and 1 ppm SO2/Air was used for the cathode feed. Severe voltage decay caused by SO2 was observed. Figure 2 shows the change of cyclic voltammograms (CV), and significant decrease of the H-adsorption/desorption currents were clearly observed. Figure 3 shows the results of the soft X-ray imaging. Fig. 3(a) shows the original image, and the cell structure was clearly visualized. Fig. 3(b) and Fig. 3(c) show the water extracted images before and during SO2 injection, respectively. Before SO2injection, liquid water accumulates under the rib area, and the decrease of liquid water under the rib near the channel was observed. In addition, slight increase of liquid water at the center part of the rib was also observed. These results suggest that the catalyst under the channel area is deactivated, and the catalyst under the rib is mainly used for power generation. It might affect the mass transport loss and becomes more important under high current density operation. 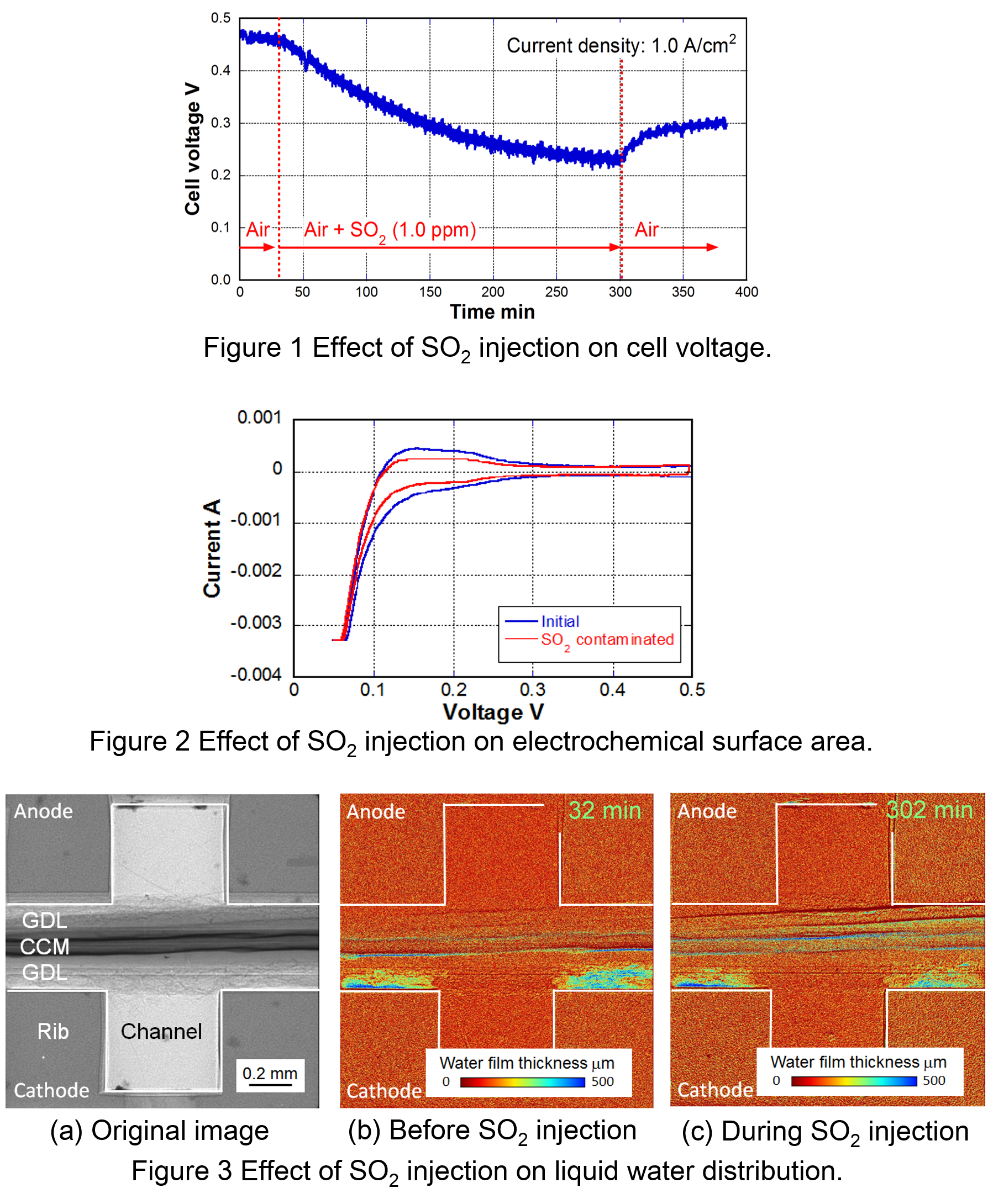